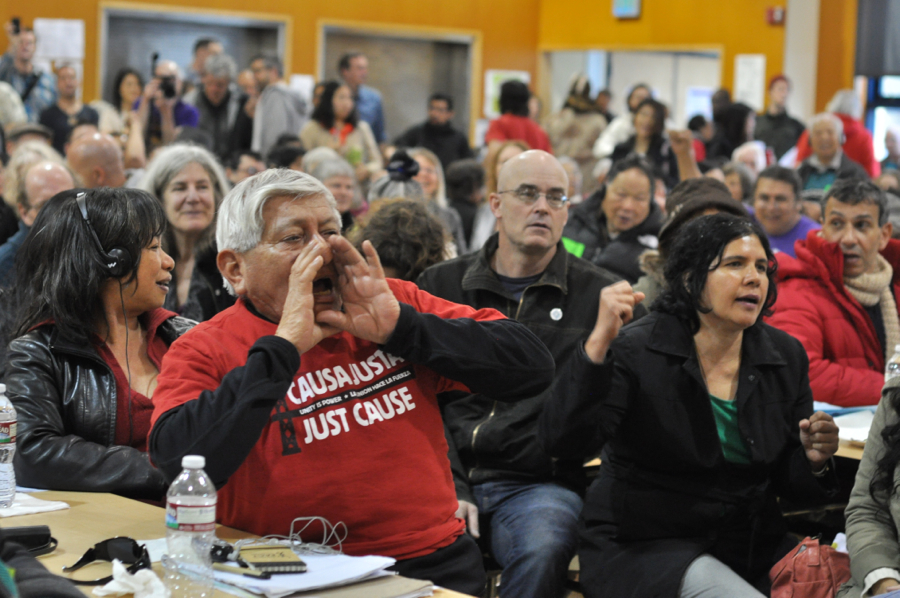 Activists gathered Saturday to discuss and vote on a raft of legislative proposals to address the lack of affordable housing in San Francisco. Photo by Josh Wolf / San Francisco Public Presss

If Harvey Milk had not been assassinated in 1978, the rampant speculation raging across San Francisco might not have become the problem it is today. Or at least that is the perspective brought into focus by one leading San Francisco housing activist who wants to revive one of Milk’s unrealized tenant protection proposals.

Before his death, Supervisor Harvey Milk proposed an “anti-speculation” plan that would have heavily taxed profits generated by quickly flipping properties in San Francisco. Now Brian Basinger, a housing activist and former president of the nostalgically named Harvey Milk Democratic Club, is pushing for the city to resurrect it.

The idea is that speculators would lose half of their profits from the immediate sale of a newly purchased property. The tax hit would decrease proportionally over the first six years of ownership and drop off completely after six years.

“It’s almost overwhelming to think about being able to pass the very last thing Harvey Milk worked on during his life,” Basinger said.

The proposal was one of seven considered at Saturday’s citywide Tenant Convention at the Tenderloin Community School auditorium. Participants were able to rank their preference for various proposals by ballot. The event was the culmination of a series of neighborhood tenant conventions that aimed to generate ideas to solve the city’s affordable housing crisis.

This is happening at the same time that the Board of Supervisors is uniting to pass stronger protections for tenants and encourage the development of both new market-rate and affordable housing. At the convention, which quickly reached legal capacity, six of the 11 supervisors were in attendance: John Avalos, David Campos, David Chiu, Malia Cohen, Jane Kim and Eric Mar.

“All of you tenants of San Francisco are angry and outraged and fearful and frustrated, and City Hall knows that,” Sara Shortt, executive director of the Housing Rights Committee of San Francisco, told conventioneers. “You’ve helped us make a great statement that we can no longer wait around until this becomes more than just a crisis but a disaster of epic proportions.”

The organizers said they would lobby the supervisors to approve the proposals that receive the most support and that if the Board of Supervisors ignores them they would work to advance a ballot measure in November.

Participants were asked to rank the following proposals and to suggest one of their own that was not listed:

1. Anti-Speculation Tax: Impose a windfall profits tax on speculators who buy and sell housing without keeping their buildings for at least six years. The rate would decrease each year of ownership, starting at 50 percent of the gain. The quicker the “flip,” the higher the tax.

2. Eviction moratorium: One-year pause on certain no-fault evictions including owner-move-in evictions for long-term tenants with more than 10 years tenancy. A pause also on demolition and capital improvement evictions, except for code compliance or safety upgrades. The moratorium would not apply to Ellis Act evictions. Other exception would apply.

5. Excessive rents tax: Create a new tax on new rental agreements if rent exceeds affordability levels set by the city. The tax would increase with higher levels. Under some circumstances tax costs could be passed through to existing tenants.

CORRECTION 3/6/14: A previous version of this article misstated the surname of housing activist Brian Basinger.