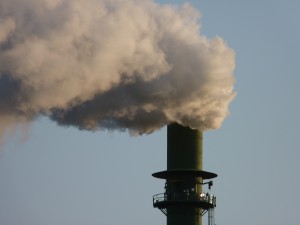 At 10 a.m. Wednesday, California’s potentially revolutionary carbon cap-and-trade program launched in a humdrum fashion. Numbers began appearing on a secure Web site accessible to the biggest oil exploration companies, manufacturers, utilities, state regulators and independent monitors. No one outside of this select group got to see its inner workings.

But the event marked a new phase in the state’s pioneering effort to halt climate change: actual dollars traded for permits to emit carbon dioxide.

For the first time in the Western hemisphere, greenhouse gas became a commodity.

“Putting a price on carbon, which cap and trade does, changes the ballgame,” said San Francisco venture capitalist Nancy Pfund of DBL Investors, who invests in clean-tech start-up companies.

“Once you get a price, everything flows from there,” she said. “It gives industries an economic incentive and to make a difference.”

It’s a prod for some companies to cut emissions, and for others to innovate. “We feel that cap-and-trade implementation is great news for California and great news for entrepreneurs who are pursuing reduced carbon solutions for many industries.”

Some climate science experts, such as Professor Dan Kammen, co-director of the Berkeley  Institute of the Environment and founding director of the Renewable and Appropriate  Energy Laboratory at the University of California, have been arguing that putting a price on carbon through market-based programs are essential to ever truly achieve greenhouse gas reductions.

California’s program is the first established in the United States — despite years of talk in Washington — and the second in the world after the European Union’s Emissions Trading Scheme. While utilities in the Northeast U.S. have a system to trade permits among them, this is the first to include a full marketplace of industries.

Some 600 refineries, oil exploration companies, manufacturers, natural gas companies, food processing plants and even universities were eligible to participate in trading, according to the California Air Resources Board, which oversees the program. They are entities that emit more than 25,000 metric tons of carbon into the air. Starting next year, they must must find a way to cut those emissions by roughly 10 percent. Alternatively, they can go into the auction, which happens quarterly, to buy permits to continue emitting at their current levels.

The overall goal of California’s landmark 2006 Assembly Bill 32, the Global Warming Solutions Act, is to reduce the state’s greenhouse gas emissions to 1990 levels by 2020. Establishing a cap-and-trade market for carbon is one critical step.

To ease California into the process, the Air Resources Board gave out free allowances covering 90 percent of the carbon emissions of each entity regulated by the program — those emitting more than 25,000 metric tons.

Each allowance represents permission to emit one metric ton of carbon dioxide. Buyers in Wednesday’s auction presumably bought allowances to cover some or all of the remaining 10 percent of their emissions. Sellers were organizations that lowered their emissions more than required, so had allowances to sell. The Air Resources Board auctioned off 23 million permits good for the year 2013.

Officials won’t reveal the market price that emerged during the three-hour trade or the number of participants until Monday, by which time an independent monitor will have verified the auction purchases. The permits had a floor price of $10 each.

The market pricing of carbon has created controversy. Some see it as a cost to business, but others, an opportunity. Several business groups said they feared the new cost for emitting carbon would drive companies out of California and hurt the economy. The California Chamber of Commerce filed a lawsuit challenging the cap-and-trade program Tuesday, alleging it imposes an unconstitutional tax, hours before the auction’s scheduled launch. But the Board pressed on.

Some environmental groups have objected to cap and trade, arguing that such systems allow polluters a way to keep chugging out harmful greenhouse gasses. “Big polluting companies are able to buy up lots of credits from smaller, greener companies, allowing a culture of carbon reliance in big business and the energy sector to continue to thrive,” argues Treehugger.com blogger Andrea Donsky. Even Jim Hansen, the former NASA scientist who is credited with first predicting global warming, took a stand against cap and trade as a method of curbing greenhouse gas production, when the world’s nations were gathered in Copenhagen in 2009.

Many close watchers of the cap-and-trade program’s development said it has contingency plans and flexible enforcement mechanisms to prevent harmful economic side-effects.

UC Berkeley’s Professor Kammen said in an interview Wednesday, “The California cap is — in a very innovative way — a cap over the whole economy, not just electricity.” So if a company chooses to leave California to avoid having to cut emissions or pay for permits, it means “they leave the market. That does not make sense and likely won’t happen.” California, after all, is the ninth largest economy in the world.

He has been a major proponent of cap and trade. Addressing Copenhagen Climate Congress, the 2009 international conference, he urged country representative to pursue tentative plans for cap and trade and other market mechanisms to price carbon.

“The critical feature here is getting on with these experiments,” he told the Congress in a videotaped and widely viewed session. “Any price on carbon is better than no price on carbon.”

Some clean-technology proponents say they expect a boon to the economy instead.

“I do expect overall economic growth because we are talking about growing the industries of the 21st century,” said Clint Wilder, a partner in the CleanEdge market research firm and co-author of “CleanTech Nation: How the U.S. Can Lead in the New Global Economy.”

“One of the big benefits, we think, of a successful cap-and-trade system will be a growing clean-tech industry in California,” he said.

The caveat, he said, is whether in fact the cap-and-trade auction was successful, which no one will know at least until Monday. Beyond that, the economic impact will become clearer.

In theory, Wilder said, “companies who are incentivized to cut their carbon emissions will want to buy the products and services of the clean tech industry to make that happen.” He said he is optimistic that will come true.

Venture capital firms have put some $9 billion into California clean-tech companies since AB32 passed, according to DBL Investors. The clean tech sector has grown at a rate many times that of the state’s overall economy.

But the word for now is watch and wait.

Pacific Gas & Electric was listed as an eligible participant in Wednesday’s auction.

“Putting a price on carbon touches a lot of pieces of our economy,” said Brad Neff, PG&E’s cap-and-trade implementation manager. He said the company regards establishment of cap and trade “a positive step forward.”

“We realize California’s program can be a model duplicated elsewhere,” he said. Nonetheless, “We are a little nervous.”

This story was produced in collaboration with Earth Island Journal and Bay Nature magazine, and supported by the Fund for Investigative Journalism.