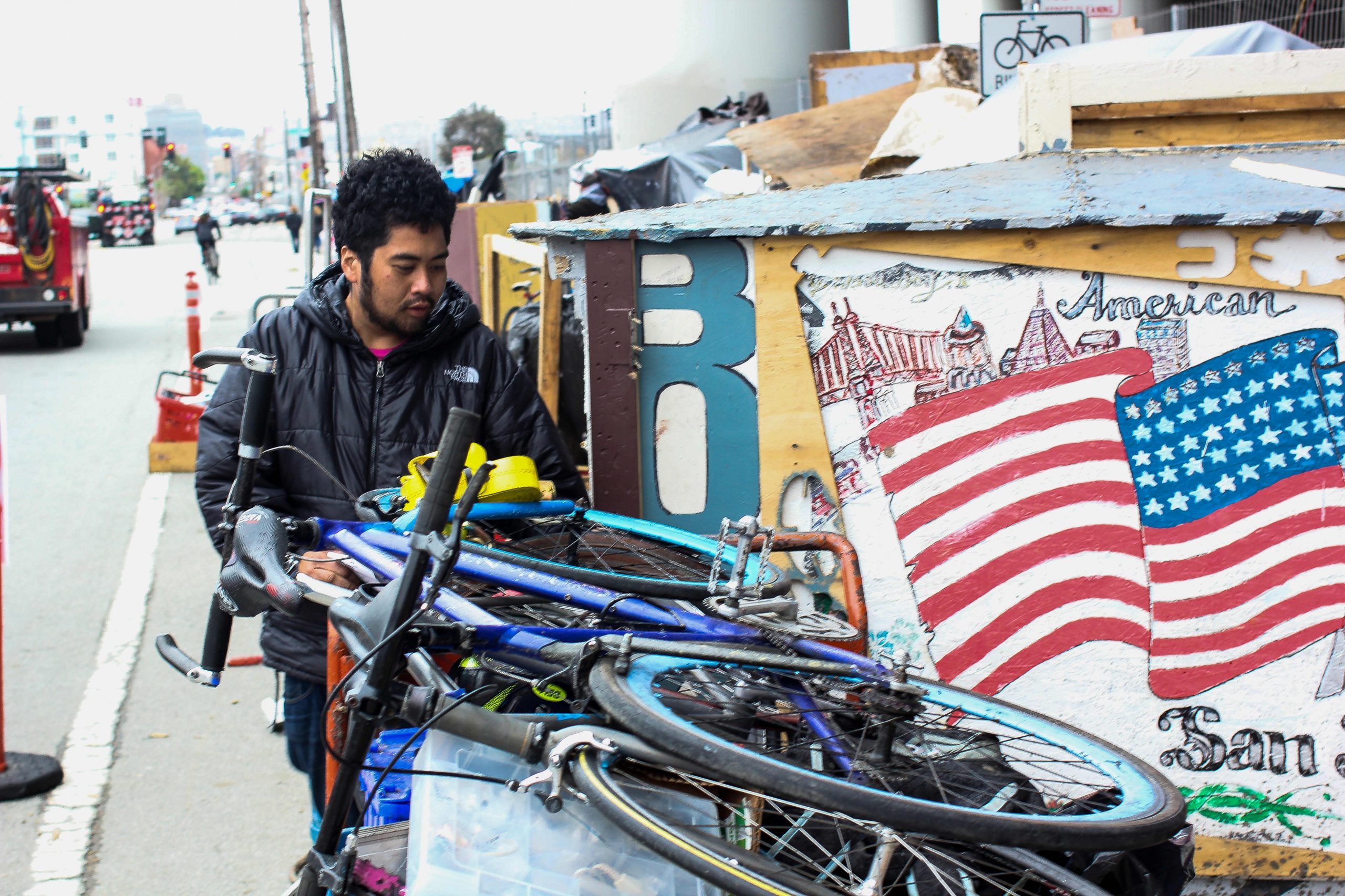 When Public Works crews dismantled the Box City encampment on 7th Street, beside the Caltrain tracks and under I-280, more than 20 of the 30 residents went to city navigation centers for temporary shelter. Photo by Noah Arroyo / Public Press

Despite acceptance in the Northwest, tent villages on vacant land have been a hard sell to Mayor Lee’s office

San Francisco voters expressed their frustration with tent encampments by banning them from sidewalks in the November election. One controversial solution to getting street dwellers into housing involves temporary, “sanctioned” camps like those being tried out around the Bay Area, elsewhere on the West Coast and across the country.

As a concept, sanctioned encampments are city-approved communities of self-managed homeless people living in tents or tiny structures, generally on underused city-owned or leased property. Amenities typically include portable toilets, showers, trash pickups, food deliveries and kitchen space. The idea is to minimize the proliferation of tents along sidewalks while honoring the autonomy of residents and streamlining efforts to support them. They are meant to be a stepping stone to permanent housing.

San Francisco officials, however, have not been keen on the idea. During a recent interview on KALW-FM radio, Jeff Kositsky, director of the Department of Homelessness and Supportive Housing, said the city favors its “navigation centers,” which provide emergency short-term shelter, over sanctioned encampments. He also told the Public Press that approved, self-managed encampments such as those in Seattle and Portland “have all failed miserably” by essentially reinforcing, instead of resolving, homelessness.

[Related: How Northwest Cities Have Made Space for Homeless Encampments]

One local activist hopes to win him over.

Amy Farah Weiss, founder of the nonprofit Saint Francis Homelessness Challenge and a 2015 mayoral candidate, has led the effort to gather support for city-approved camp spaces, which she calls “sanctioned transitional villages.” These villages would operate within the system for people unable to find permanent housing after a 30-day stay in a navigation centers.

Weiss said she has private funding to test the idea here. Two local philanthropists have pledged $20,000 for a three-month pilot program to house 10 to 15 people, including couples, in 10 structures, Weiss said. The donors wish to remain anonymous but say the pledge is guaranteed.

Instead of tents, residents would sleep in wooden structures that accommodate two people each and are big enough to stand up in. The tiny structures would cost $650 to make and include storage space, a lock and a rain tarp. The villages would be governed by a set of rules and community feedback.

“The Department of Homelessness and Supportive Housing knows we have this money and that we’re excited to use it and find a location to start the pilot program,” said Weiss.

Identifying locations is one of the main challenges.

“I think it’s a shame we have so much city-owned property that remains underutilized,” Weiss said.

The total number of “underutilized” city-owned properties is hard to quantify. But the city’s most recent surplus property list, from March 2016, lists 54 vacant city-owned lots in San Francisco, eight of which contain empty buildings. It is not clear how many of these site could accommodate the kind of encampment Weiss invisions.

Kositsky and his deputy, Sam Dodge, have not publicly reconciled their stated resistance to official camps with the claims of Weiss and others that they have apparently expressed interest in the concept.

As of late February, the Public Works department had identified 70 unsanctioned camps across San Francisco — several on vacant, city-owned land — and rated them on a scale of one to five based on safety conditions. After voters in November passed Proposition Q, which made sidewalk camps illegal, Public Works began dismantling them, starting with those ranked most unsafe. Campers are then encouraged to relocate to the city’s navigation centers for 30 days, with the goal of finding permanent housing. Two centers are operating, a third is set to open this month, and three more are planned.

But more than 70 percent of homeless campers left the navigation center, possibly returning to the streets, according to city data that the city published in February and that Weiss cited.

From Box City to navigation center

One recent makeshift community called Box City consisted of sheds of wood and found materials along 7th Street, beside the Caltrain tracks and under Interstate 280. When city workers dismantled it in January, more than 20 of the 30 inhabitants agreed to move into a navigation center, Weiss said. But expectations were mixed.

“I don’t want to go to the navigation center,” said RJ Noble, a former Box City resident, the day before the structures were removed. “What’s the point of going for 30 days and then back to the streets again?”

Roland Limjoco, another camp resident, said, “We have no choice but to go to the Navigation Center. Let us stay here if we follow the rules, keep the streets clean. We’re adults here.”

It is not surprising that homeless people seem to prefer encampments to shelters, too. Chris Herring, a doctoral candidate in sociology at the University of California, Berkeley, said he has interviewed scores of residents of sanctioned camps in several cities and they always say camps are better than shelters.

Though he said sanctioned camps would reduce homelessness, he also is convinced that the model will not work for everyone. The most effective system entails a diversity of options, including camps, shelters and navigation centers, said Herring, who has collaborated with the Coalition on Homelessness, a San Francisco-based advocacy group, on reports and grants.

Since the post-election push to clear pop-up settlements, Weiss has focused on improving remaining camps as much as lobbying for new, sanctioned ones.

“I see value in what the city is doing, giving everyone the opportunity to get off the street,” said Weiss. “But at the same time it’s an incomplete solution at present because nobody is going out to the camps and working with residents to prepare them for the navigation center. After 30 days, they’re just returning to the streets.”

Security and support would be easier to provide to organized homeless communities, said Weiss.

She said unsanctioned encampments, police complaints and 311 calls would steadily shrink with the help of sanctioned villages, and that these villages would cost only a fraction of what is spent policing and dismantling unsanctioned camps.

For the 2015-2016 fiscal year, Public Works spent $8.4 million on encampment- and homeless-related cleanup costs, nearly all of it on labor. So far this fiscal year, which ends June 30, $5 million has been spent.

But that is just a fraction of what the city estimates as the larger cost of policing homeless encampments.

A report by the Budget and Legislative Analyst’s Office estimated the city spent $20.6 million in 2015 on “sanctioning homeless individuals for violating quality of life laws.” The report said the Police Department accounted for about 90 percent of those costs.

The report cites a 34.8 percent increase from 2014 to 2015 in incidents “involving the homeless violating quality of life laws” even though the homeless count only grew by 3.9 percent from 2013 to 2015.

Weiss is not the only local advocate trying to get the attention of policymakers. In a first for the group, the Coalition on Homelessness delivered a petition to Mayor Ed Lee and the Board of Supervisors in mid-January entitled “Encampment Residents Call for Human Rights Based Solutions” and signed by 619 people. Tent encampments are among its recommendations.

The executive director of the Coalition on Homelessness, Jennifer Friedenbach, said the group had drafted a policy paper on “safe and dignified sleep spaces” and would present it to Kositsky. This is the first time the coalition has weighed in on the encampment concept.

While the coalition maintains that encampments are not a permanent solution to homelessness, they do offer short-term benefits.

“For many homeless people, the traditional shelter system, with a structured setting feels most safe for some while others prefer less rule intensive shelter model of the navigation centers. However, these style of shelters do not serve everyone well, and a safe and dignified sleep space would better serve this latter group,” said the paper, which emerged from studying Seattle, Portland and Eugene, Oregon, and other cities where camps have been established.

In the Bay Area, Oakland has one sanctioned encampment, while San Jose is pursuing the idea.

In February, the Berkeley City Council voted unanimously to fund 100 prefabricated micro-units for homeless people, but it has not settled on whether they would be for “temporary/short term/transitional or long term habitation.”

Oakland established its camp in October 2016 with the “Compassionate Communities” experiment. The city set aside $190,000 to bring toilets, fences, counseling and trash-pickup services to a camp at Magnolia and 35th streets, with the goal of moving everyone into housing by March 31. But city officials are struggling to meet the project’s deadline, largely due to heroin use that is more widespread than initially anticipated.

In January, San Jose began soliciting proposals to build the state’s first “Bridge Housing Communities” — interim housing for homeless people on city-owned or leased property in all 10 city council districts. The city’s plan for “tiny homes” and other “unconventional housing structures, made possible by legislation enacted in October, allows it to temporarily suspend the state’s restrictive building codes after declaring a “shelter emergency.”

A community is expected to house 20 to 25 people in “emergency sleeping cabins,” portable structures accommodating one or two persons each and be equipped with electrical power and lighting. Each community would have restrooms, communal space for cooking and dining, an on-site property manager and off-street parking.

Ibrahim Mubarak, a Portland-based activist who founded the homeless advocacy organization Right 2 Survive, said he was consulted by San Jose officials. He co-founded and lived in two of Portland’s four sanctioned encampments, Right 2 Dream Too and Dignity Village, which were among the first of their kind in the country. None are funded or managed by the city.

“We teach people how to advocate for themselves, provide workshops, speaking engagements,” said Mubarak, who is board president of the Western Regional Advocacy Project, an umbrella group that includes the Coalition on Homelessness. “Residents are around their peers, they build community, feel safe and figure out what they need to do to become successful. It works.”

Herring said sanctioned camps have not appeared in San Francisco because there has not been an organized demand for them here, at least not until Box City. He said most of the camps in the Pacific Northwest began as resistance activism before the campers paired with churches and began making demands on their cities.

“Advocacy and resistance in other cities is stronger, so camps came,” Herring said.

San Francisco has become more open to the idea in the past year, he added, but that is not the message most officials have promoted. “There’s movement on this now,” Herring said.

Public Works Director Mohammed Nuru appeared to break ranks with the Department of Homelessness and Supportive Housing by saying he would consider a sanctioned camp, along with portable toilets for tent squatters.

“If we had a vacant lot where people could stay, I think we would look into it,” he told the Chronicle on March 15 after city crews cleared 26 tons of trash and nearly 3,300 used syringes from six unapproved encampments in the Mission District and South of Market.

Nuru also said that because there are too many homeless people for the city’s shelter beds and navigation centers, Public Works might open its own shelter.