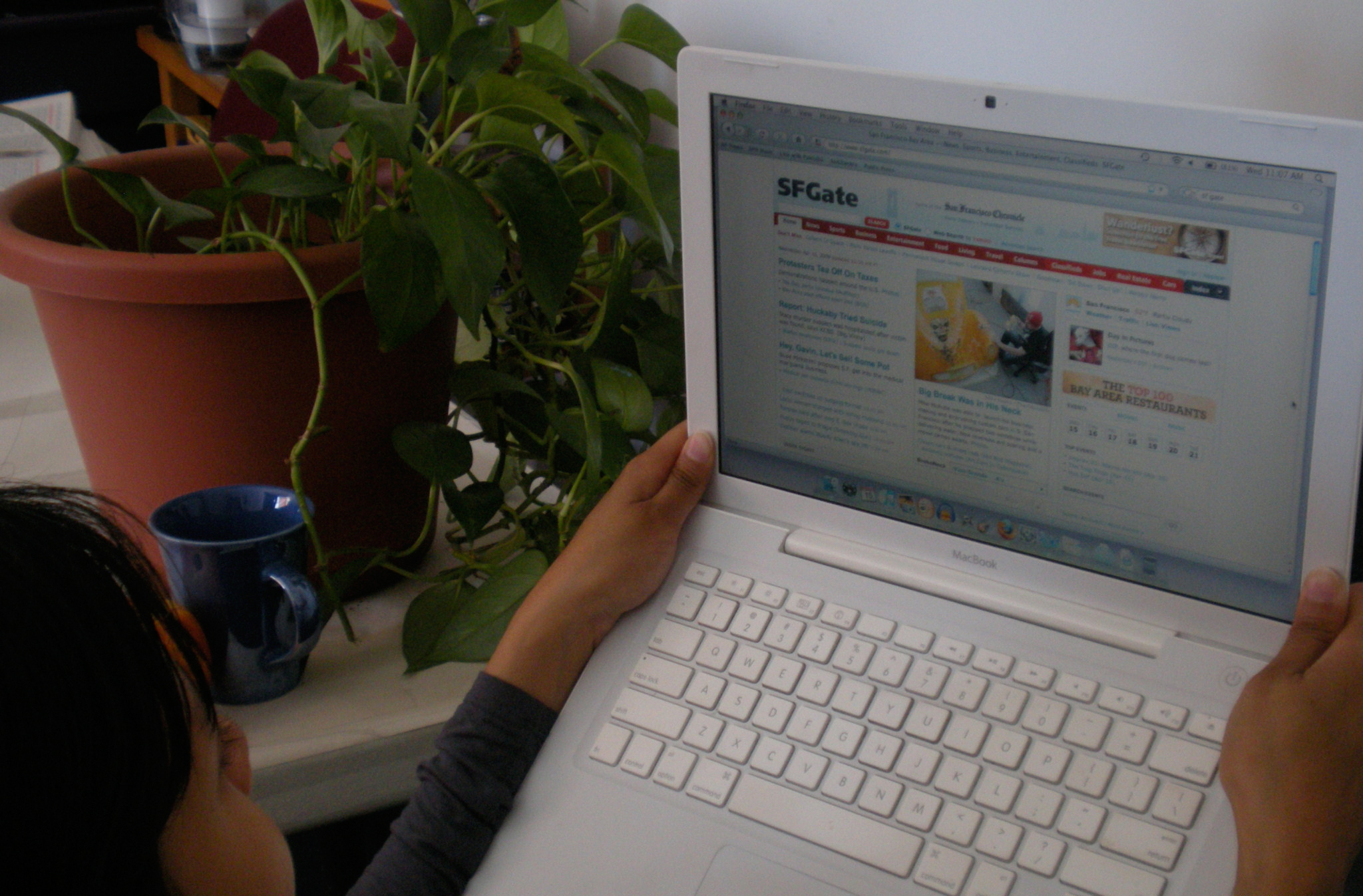 Recent layoffs at the San Francisco Chronicle inched it one step closer to saving itself, some would say. However, critics say the financial move is only prolonging the inevitable.

The Chronicle’s woes come on the heels of papers in several major U.S. cities making the move to online only publication, declaring bankruptcy or being sold.

The ever-changing newspaper industry has many local residents, young and old, talking about the future and the “good ole’ days” while debating whether or not the Chronicle should further take advantage of its online component – SF Gate – versus a daily, hard copy edition.

Visits to a Mission district senior center and several city Laundromats uncovered a slew of contradictory and unexpected attitudes about newspapers, some of which help explain why they’re facing tough times.

But even if they don’t read the Chronicle, most San Franciscans say it’s important for the city to have a newspaper. And many, young and old alike, think the paper needs to be in print form.

Still, people who read the paper often don’t buy it. And contradicting stereotypes about who reads papers, plenty of seniors never pick up a newspaper while younger people say they prefer to hold a paper in their hands.

Eddie Gutierrez, sitting in a common room at the On Lok senior center 30th Street in the Mission, said he’s “over 80,” and reads the newspaper every day.

“I’m lost without a newspaper.” But he doesn’t pay for it. His daughter has a subscription to the Chronicle and he gets the paper from her.

“It’s economical,” he said. But it’s not so good for the newspaper business.

The San Francisco Chronicle — northern California’s largest newspaper — is cutting its workforce after parent company Hearst Corp. announced in February that it would be forced to sell or close the paper if it could not make needed “critical” cost-cutting measures. Hearst said the paper lost $50 million in 2008.

Folding her clothes at a Laundromat on Haight and Fillmore streets, Pamela Newman, who wouldn’t give her age, but is over 50, said she reads local papers — the free ones. Or she reads the Chronicle at a coffee shop.

Newspapers have a “more profound effect when written,” she said. Print gives you "more time to read and think," she added.

“The photos, aren’t they better?  You can read it forward and backward,” Newman said. “You can do a lot with the written word.”

“It’s very important to have a local paper,” said Mission resident Geraldine Bienvenu, 33, while waiting for her clothes at a Laundromat on Valencia Street.
Bienvenu, a Paris, France, native, said newspapers are important because they give more in-depth coverage than television. She said she reads her hometown paper, Le Monde, daily online and looks at SFGate — the free online version of the Chronicle — but only for movie listings.

Despite her views about the importance of a local paper, she does not read the printed Chronicle.

Recognizing the contradiction, she said she feels some responsibility for the financial trouble at the Chronicle because she so rarely supports it by buying the paper.

Chad J. (who didn’t want his last name printed) is typical of his age group — he gets all his news free online. The 27-year-old Mission resident said he’s only interested in independent media and doesn’t foresee ever having to purchase that kind of news — online or in print.

But other young people believe having a local paper is important. They actually prefer them in print form. They even purchase them.

“I like the idea of a newspaper in my hand,” said Sean Heskett, 36, of Lower Haight. He reads the Chronicle, the San Francisco Examiner, the New York Times and the Wall Street Journal — mostly in print. He said he would pay for online news if he had to, but prefers the print product. He said he likes the crunching sound of holding a newspaper, which reminds him of his grandfather.

Breaking another stereotype about people his age, Heskett enjoys cutting out and saving newspaper articles.

Some also see the online versus print debate as an equity issue.

“It’s not fair to just have news online. Not everyone has access,” said Sarah DeLaGarza, 31, of the Mission. “I think it’s better to receive news in print. How’s the bum on the street going to know what’s going on?” She reads several print newspapers, including the Chronicle, even though she said she doesn’t hold it in high regard.

On a Saturday morning at the On Lok senior center, some seniors confirmed the notion that newspaper readership is heaviest among older Americans. A former Chronicle printer who lives in downtown San Francisco and declined to give his name said he buys and reads local newspapers “just about every day.”

“I’m a news junkie,” he said as he sat alone with the morning’s Chronicle. He said he thinks the layoffs and possible shutdown of the paper will mean decreased news coverage. He theorized people would still get news from other sources — other papers and word of mouth.

Conversely, other seniors at On Lok were not interested in newspapers or the threat of decreased newspaper reporting.

Larry C. (who didn’t want his last name printed), 80, of Oceanview, said he rarely reads a newspaper and hasn’t since TV and computers became popular. He said he thinks TV and the Internet allow for more immediate “up-to-date” reporting.

Betty O’Connell, 70, of Daly City said she has never read newspapers and relies on television for news. She said the layoffs at the Chronicle worry her because of lost jobs, not the possible decrease in news coverage.

“I used to get the Sunday paper until it went up over a dollar,” he said. He only read it for the entertainment section, saying he doesn’t pay attention to the news at all. In regards to the cuts at the Chronicle and the presence of a hometown paper, Watson was unconcerned.

It is, however, the younger crowd who already had nostalgia for the beleaguered Chronicle.

“It seems a little wrong to not have a paper,” DeLaGarza said. “It’s scary not to have that info there.”

“The thought of us losing a city newspaper is an embarrassment. Whoever heard of a city without a newspaper?” said Niq Shelbi, 46, of the Castro, confessing he doesn’t read any newspaper. “I think it’s important to have. It’s part of our city’s heritage. I don’t take Golden Gate Bridge that often but I’m glad it’s there.”