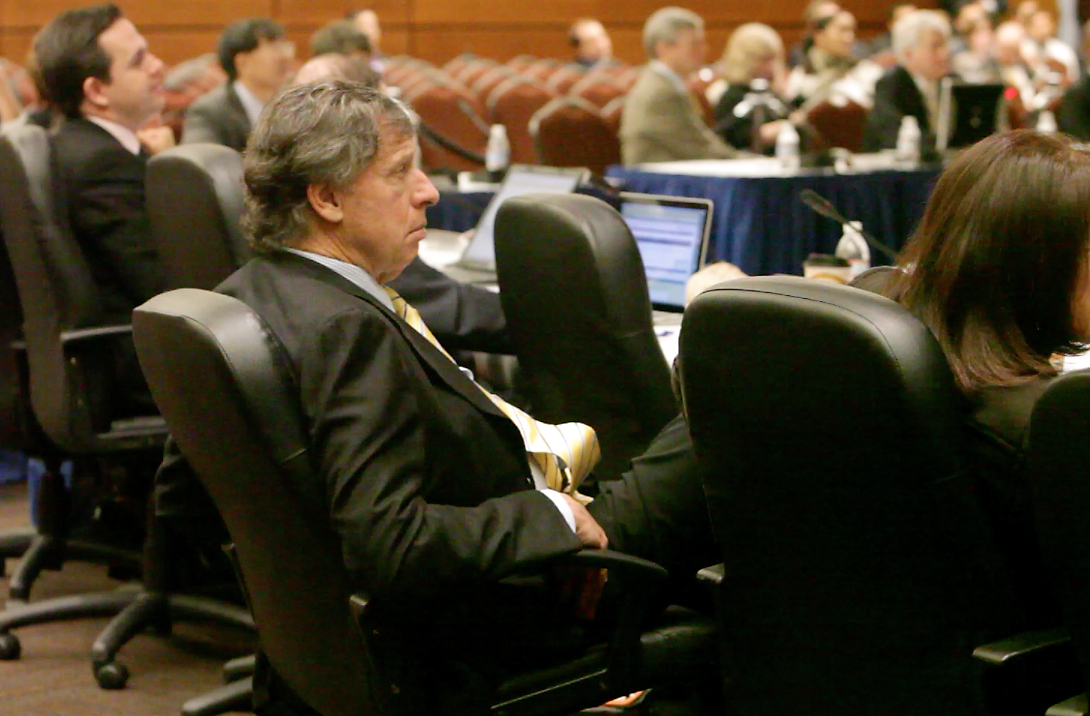 A year ago, Richard C. Blum, then the chairman of the Regents of the University of California, spoke at the Milken Institute’s Global Conference 2009, held at the Beverly Hilton in Beverly Hills. The corporate confab was hosted by Michael Milken, the “junk bond king” who went to prison in the aftermath of the savings and loan fiasco in the 1980s. Milken, who is barred from securities trading for life by federal regulators, has since recreated himself as a proponent of investing in for-profit educational corporations, an industry which regularly comes under government and media scrutiny in response to allegations of fraud made by dissatisfied students.

At the conference, Blum sat on a panel called “The New University and Its Role in the Economy,” alongside the presidents of the Massachusetts Institute of Technology (Susan Hockfield) and Arizona State University (Michael Crow). The panel focused on how universities can best serve the corporate jones for tech-savvy employees by recruiting smart freshmen with scientific aptitude.

One panel member urged treating universities as “laboratories of business ideas and products.”

As someone who oversees investment policy decisions for the University of California’s $63 billion portfolio, and as the largest shareholder in two for-profit corporate-run universities — in which UC invests — Blum had a unique perspective to share at the conference. He advised public universities to attract business-oriented students with clever advertisements, as vocational schools do.

Marketing strategy aside, Blum has taken on two seemingly disparate roles — one as an advocate for a nonprofit university, and the other as an owner of two for-profit educational corporations.

For several years, Blum’s firm, Blum Capital Partners, has been the dominant shareholder in two of the nation’s largest for-profit universities, Career Education Corp. and ITT Educational Services, Inc. The San Francisco-based firm’s combined holdings in the two chain schools is currently $923 million. UC investment managers have invested $53 million of public funds in the two educational corporations. Blum sits on the university’s investment committee, which oversees the management of the university’s stock portfolio.

The regents’ conflict-of-interest policy requires them to “avoid the potential for and the appearance of conflicts of interest with respect to the selection of individual investments … public officials shall not make, participate in making, or influence a governmental decision in which the official has a conflict of interest.” And the California Political Reform Act of 1974 provides civil and criminal penalties for officials who ignore conflicts of interest — as UC makes clear in ethics training presentations specifically created for university officials.

When UC Treasurer Marie Berggren was questioned about the propriety of UC investing in Blum’s for-profit college chains, her spokesman, Steve Montiel, replied by e-mail: “The Treasurer’s Office doesn’t track Regents’ holdings in making decisions about security selections, though Regents’ holdings are disclosed as a matter of policy.”

Blum did not respond to repeated requests for comment. UC spokeswoman Lynn Tierney called on his behalf, saying that the university recruits its students from the intellectual elite of applicants. Only those with very high grade averages and SAT scores get in, she said. Therefore, “UC is not losing students to Blum’s vocational schools, and there is no conflict of interest,” she said.

“It is hugely inappropriate for the University of California to invest in for-profit colleges when it should be promoting public education,” he said. “And something stinks when university investments end up in companies largely controlled by a regent. To the average fellow on the street, this would seem to be a conflict of interest.

It is up to Mr. Blum and the UC treasurer to explain how it could not be a conflict of interest.”

Because of repeated tuition hikes by the UC Regents and their gutting of many classes and educational programs and the imposition of a 15 percent reduction of instate admissions to the university, the gateway to higher learning in California has narrowed. Blum voted in favor of all of these measures.

On March 13, The New York Times reported that many chain schools, including ITT Educational Services and Career Education Corporation, “have exploited the recession as a lucrative recruiting device while tapping a larger pool of federal aid … selling young people on dreams of middle-class wages while setting them up for default on untenable debts, low-wage work and a struggle to avoid poverty.”

The Times noted that for-profit schools are directly benefiting from cuts in education, especially in California where state-funded universities and community colleges have been “forced to cut classes just when demand is greatest.”

Indeed, ITT Educational Services recently reported to its shareholders that because of “higher unemployment rates among unskilled workers,” company revenue increased by $300 million, to $1.3 billion. Responding to a recession-induced increase in demand for vocational training, ITT increased its tuition by 5 percent (70 percent of ITT’s revenue comes from federal tuition aid programs).

Blum’s investment bank entered the for-profit education business in 1987, when he purchased a large block of shares in National Education Corp., an Irvine-based vocational school. He joined the company’s board of directors, sitting alongside former U.S. Sen. Barry Goldwater, R-Ariz., and David C. Jones, a former chairman of the Joint Chiefs of Staff.

Two years later, according to a report in the Los Angeles Times, Blum got in hot water when angry shareholders filed a lawsuit contending that “the company issued rosy financial statements while Blum and other directors were selling their shares.” The shareholders claimed in court documents that Blum sold $2.7 million worth of shares at about $24 per share after he learned, a day before the public announcement, that the company president planned to resign. When the share price bottomed out at $3.50 after the announcement, Blum reinvested in the troubled company, booking a profit.

By the late ’80s and early ’90s, National Education Corporation was “battered by accusations that its vocational schools were riddled with fraud,” The New York Times reported in March 1997. A new president was hired in 1994 to reform the school and to bring it into the age of computerized learning. By 1995, Blum had gained control of 11.5 percent of National Education Corporation stock via his own firm’s holdings and those belonging to a nonprofit investment fund, Commonfund, for which Blum worked as an investment advisor. (Commonfund manages investments for more than 1,400 universities, including UC.) In 1997, Harcourt, the textbook publisher, bought National Education Corporation for about $750 million, or $21 a share. Blum and his private partners profited handsomely.

After he became a regent in 2002, Blum pursued further investment in for-profit education. In June 2005, Blum Capital Partners bought 5 percent of the stock (worth $24 million) in Lincoln Education Services Corp., a $300 million operation with 32 campuses. Blum also acquired large blocks of shares in ITT Educational Services and Career Education Corp. These two purchases followed dips in the companies’ stock prices brought about by allegations of corrupt practices made against them by government agencies.

In the case of ITT Educational Services, federal and state regulators investigated the company in 2004 after shareholders and students alleged that it was falsifying student attendance, grades and job placement records in order to keep federal financial aid flowing. When the news broke, the price of ITT shares halved.

Blum Capital Partners acted quickly, purchasing reams of devalued ITT stock. It soon owned the largest block of stock in the company — a 10 percent ownership stake in 2006. Not long afterwards, the investigations were closed, with no findings of wrongdoing. By May 2010, ITT’s revenue exceeded $1.3 billion, and Blum Capital Partners’ stake was valued at $415 million.

Similarly, Blum Capital Partners bought shares of Career Education Corp., a $1.8 billion operation that serves 90,000 students, following a corruption controversy. In 2004, Career Education Corporation was investigated by multiple federal agencies after whistle-blower lawsuits alleged that the school had allowed failing students to remain enrolled in order to keep its pipeline to federal grants and loans tapped. In 2005, after “60 Minutes” televised an unfavorable story about the chain school, the value of its stock dropped by more than half. Blum Capital Partners bought in for $33 million. By May 2010, its stake had grown to $508 million, making Blum’s firm by far the largest and most powerful shareholder of the chain school. A partner with Blum Capital Partners, Greg L. Jackson, sits on the board of Career Education Corp.

UC is an investor in both educational corporations.

Even as Blum was buying stock in Career Education and ITT Educational Services, UC financial records show that the university’s investment managers were actively buying and selling these same stocks — to the tune of $53 million. The university was not just holding onto these stocks to accrue value over time, it was day trading them in large amounts, as much as $2 million a trade, thereby affecting the daily price of these stocks. Noah Stern, president of Associated Students at the University of California, said he is concerned by UC’s investment practices. “Student trust in the regents was already shaky,” he said. “We need a structural overhaul of the university governance system.”

Note: This is an edited version of one article in a 10-part investigative series on the regents’ conflicts of interest sponsored by Spot.us and a consortium of six Bay Area newsweeklies. The rest of the series will be linked here as stories are published: http://spot.us/pitches/337 CalPERS, the state pension fund, also had, as of the end of 2009, $6 million invested in Career Education Corporation, and $10 million invested in ITT Educational Services. And CalPERS held more than $100 million in shares of both companies as part of a $500 million investment with Blum Capital Partners, which is an investment adviser to CalPERS. Details about CalPERS connections to Blum and other regents may be found in the investigative series.