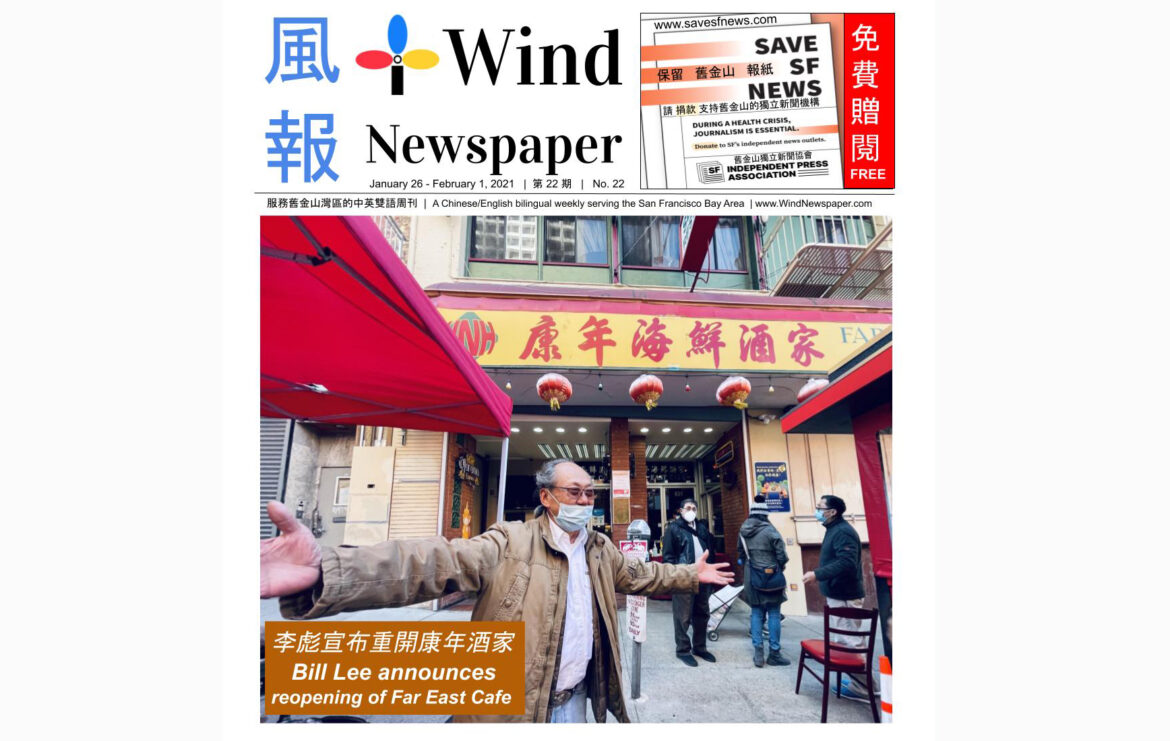 The Jan. 26 issue of the Wind Newspaper.

San Francisco news media, like publications around the nation, have laid off or furloughed journalists during the coronavirus pandemic. Nonetheless, several new publications have launched in the last year. Portia Li had been covering San Francisco’s Chinese community for the World Journal, a large Chinese-language newspaper, since 1986. She was laid off in April. Li told “Civic” that she began fielding calls from readers who stopped seeing her byline in the World Journal.

Her fans told her she should set out on her own, and she did so, publishing her first edition of the Wind Newspaper in September, in print and online and in English and Chinese.

For years, Li said, colleagues in the English language press would ask her how they could follow her stories, which focused primarily on criminal justice and were published only in Chinese. She would tell them to use Google Translate, but the results were often unreadable. Now she wants to make her reporting accessible to readers in both languages.

“I am so happy I can also be the bridge for a very unique community,” Li said. “Many of my readers, they are English-speaking only, or maybe limited-English speaking Chinese and Asian Americans. And they enjoy to read the articles, because it’s so related to them.”

Li’s coverage has already had an impact, she said. The owner of a century-old restaurant, Far East Cafe, credited Wind Newspaper’s coverage and other media attention with bringing in donations from around the country that spared the business from permanent closure.

“As a journalist I tried to save the restaurant, and this is how I want the community to know about that, ‘wow, this is a 100-years-old restaurant. It’s going to close, and we need to step up to help them, help the restaurant and help the workers,’” Li said.

Li publishes a printed newspaper weekly, in part on the advice of the same friends who told her she should start her own publication. For now, she is running the operation on her own dime, though she said she hoped to eventually break even.

“If I can balance the costs and the advertising income, and then I’m a volunteer, I’m happy to be a volunteer to work for my newspaper,” Li said.