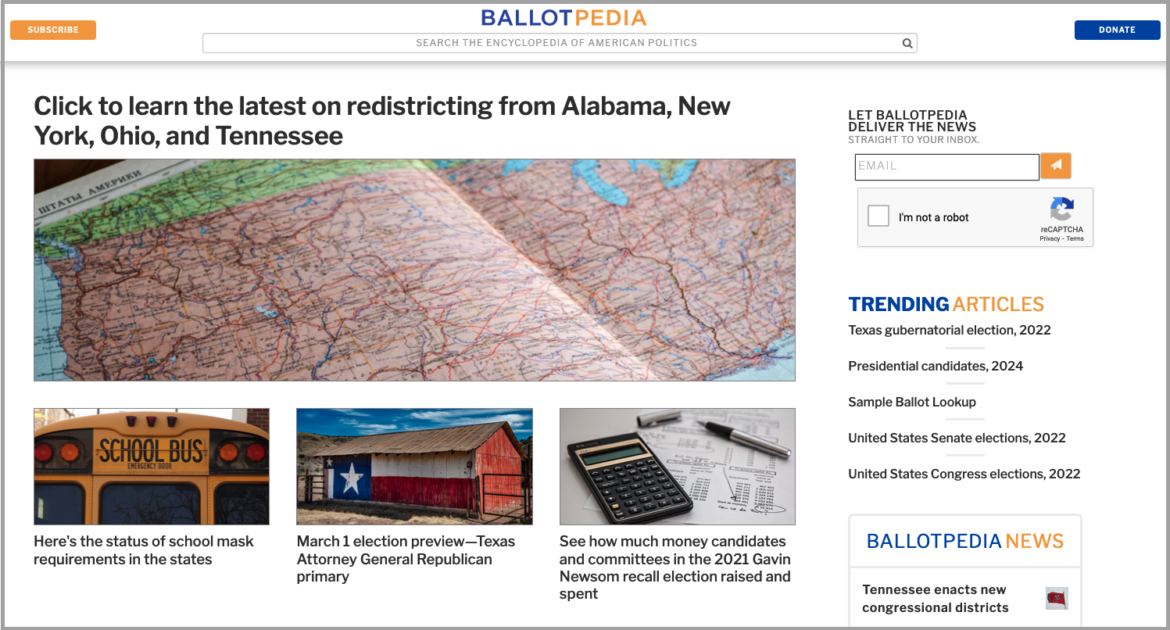 A screenshot of Ballotpedia's homepage.

Voters who feel confused or misled by the bombardment of political advertising that comes with every election season might seek out a neutral, straightforward explanation of a ballot measure or campaign. For many voters, that search leads to Ballotpedia. Though the site is exhaustive and may seem formulaic, its content is not automatically generated. Professional writers and editors carefully curate the material that lands in this elections encyclopedia, which covers everything from ballot measures to judges to redistricting.

Amée LaTour is a writer on the Ballotpedia Marquee team, which covers elections that require detailed explanations or background, either because they’re expected to be competitive or because the outcome of the election could change the balance of power within a governing body. LaTour’s career in writing about politics was sparked by an interest in philosophy.

“Since I was an older teenager, I was really interested in ethics, and questions like how we find meaning and what we consider to be good,” she said. “To me there’s a natural connection between those ethical questions, and politics. Politics — my idea of it — is the concrete application of ethical ideas. That’s where people act on how they think the world should be.”

But her writing for Ballotpedia includes no expression of how she personally thinks the world should be. Writers are fastidious about maintaining neutrality.

“If we are covering polls in a race, and we include some of the polls, and not others, we will tell readers exactly how we make those choices so that they can better understand that and know that we’re not just cherry-picking the data.”

It also means being conscientious of giving equal attention to the various sides of a contest.

“When we’re covering candidates, we’re always very conscious of the depth of coverage we’re giving to candidates, and whether that’s unequal,” LaTour said.

Ballotpedia writers are not journalists, however. LaTour said she wouldn’t consider herself one mostly because she is not connected to the 24-hour news cycle the way a reporter might be. Her focus is on producing material that will still be available when someone looks up a ballot measure 10 years down the line.

Much of the coverage comes directly from campaigns, she said.

“We don’t really publish our own articles assessing the validity of different things,” she said. “If one candidate is saying something, and the other candidate says it’s untrue — and candidate A responds to candidate B saying it’s untrue — we might feature that back and forth.”

Material that appears on Ballotpedia is edited. The process includes a review of the language and terms used to make sure they’re clear and easy to understand. And once material is published, readers can give feedback too, by email or through an error submission form on the website. Every single email and feedback message is read, she said.

“We invite it,” LaTour said. “If someone sees something they think is either factually wrong or biased in some way, we absolutely want people to let us know.”