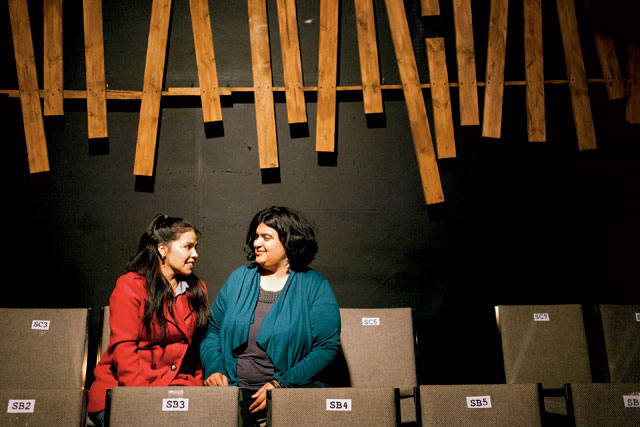 Zoraida Peña Canal, left, was trafficked from Peru to be a domestic servant in Walnut Creek. Lawyer Avantika Rao guided her through the complex T visa program. Peña Canal prevailed, without law enforcement certification of her case. Photo by Monica Jensen/SF Public Press

Attorneys for rescued victims seeking residency protection say law enforcement agencies are often unwilling or slow to “certify” victims’ claims of having been brought to the U.S. to work by force, fraud or coercion.

Legal experts and social service providers in high-trafficking regions, including the San Francisco Bay Area, suggest that victims are placed in a dangerous dilemma: Promising to cooperate with an investigation could possibly help their visa cases, but it could also expose them and their families back home to retaliation.

One result is that victims only apply for a fraction of the visas available each year. Last year the government received one-fifth of its quota, and of the applications received nearly 23 percent were rejected.

Lawyers and service providers for trafficking victims said the lack of assistance from law enforcement slowed or derailed what they called deserving applications. In one case, a domestic servant who worked 16-hour days for no pay for years earned a T visa with the help of a crusading lawyer despite the lack of certification by federal law enforcement officials.

Created by the federal Trafficking Victims Protection Act of 2000, the T-1 Nonimmigrant Status visa provides trafficking victims from foreign countries temporary legal status, with an opportunity to apply for permanent residency and access to federal benefits if they cooperate with law enforcement in the investigations of their traffickers. Minors and those unable to participate in investigations because of physical or psychological trauma are excused, according to U.S. Citizenship and Immigration Services, the agency that adjudicates the visa applications.

Data supplied by the agency reveals that only a few hundred T visas have been issued each year since the program began, despite a yearly quota of 5,000 available. According to the agency, in the last fiscal year 557 T visa applications were approved and 223 were rejected.

Scholars specializing in international human trafficking laws say the program is flawed because the help it offers victims is hinged on their willingness to assist in the investigations.

“It would be much better to have a system where your protections were not dependent on you giving evidence against the person who trafficked you, which is the case for children,” said Jacqueline Bhabha, director of research at Harvard University’s François-Xavier Bagnoud Center for Health and Human Rights.

The T visa application encourages applicants to submit “primary evidence” of their cooperation, which consists of a law enforcement certification that they have agreed to support investigations of their traffickers.

Attorneys and social service providers who work with T visa applicants say obtaining the  certification is often an impediment in the application process.

Zoraida Peña Canal was trafficked from Peru to be a domestic servant in Contra Costa County five years ago. Sacramento attorney Avantika Rao helped her obtain a T visa, even though she said she was unable to get certification from law enforcement.

Peña Canal entered the U.S. in July 2006 to live with and work for a Walnut Creek family. She was put to work from 6 a.m. to 10 p.m. each day for no pay caring for two children and doing chores, though her employer assured her that she would be paid.

Rao said Peña Canal escaped with the help of three neighbors. She learned about Peña Canal’s case when she was working at La Raza Centro Legal, a San Francisco-based organization that provides legal services to immigrants and low-income people.

Rao said in an email that law enforcement denied the certification though her client was doing everything possible to cooperate in the investigation.

“Ms. Peña Canal and I met with law enforcement agents and the U.S. Attorney’s Office on at least a dozen occasions during which Ms. Peña Canal provided physical evidence as well as testimony with regards to the crime,” Rao said.

After a series of requests to the U.S. Attorney’s Office to supply the certification, she was notified in September 2008 that the office would not provide the document.

“I was absolutely devastated by their decision, especially because they implied that they did not trust my client and did not view her case as important,” Rao said.

Despite these hurdles, Peña Canal’s T visa application was approved in January 2009.

Peña Canal relocated to San Francisco, where she now can be legally employed. She works as a janitor at a San Francisco company, cares for seniors in their homes and cleans houses on a referral basis.

Government agencies denying certification for T visa applicants is a common theme. Hilary Chester, associate director of anti-trafficking services at the United States Conference of Catholic Bishops in Washington, said law enforcement officials stalled on signing the certification for a client who was trafficked from El Salvador.

“I think what still bothers me personally is this notion that so much weight is given to the law enforcement piece, and that there is this requirement that a person be willing to cooperate in the prosecution,” Chester said. “I think it’s slippery.”

Her client did receive a T visa — more than two years later.

Legal service providers said that in addition to the hassle of getting law enforcement’s blessing, trafficked individuals also fear that applying for the visa may subject their families back home to threats.

“I think the biggest concerns are not so much fear in reporting the trafficking or talking to law enforcement about what’s happened, but it is very scary to be in a situation where they may potentially have to confront their traffickers in court — and the fears of retaliation for family back home,” said Lynette Parker, clinical supervising attorney for the immigration program of the Katharine and George Alexander Community Law Center, based at Santa Clara University.

“One of the biggest challenges for us is to identify NGOs on the ground in the home countries that can help give information and provide safety to the families,” she said, adding that many non-governmental organizations provide services to victims in coordination with U.S. groups.

Some clients are also apprehensive about going through with the investigations because of the stigma they and their families might face in their communities if U.S. investigators start asking questions abroad, as the FBI does occasionally.

Hediana Utarti, community projects coordinator at the Asian Women’s Shelter in San Francisco, said she had a case in which a family brought a young woman to the U.S. from Asia by promising her work as a cook and offering to send her to school. She said the woman did cook, but was also forced to participate in sex parties in the family’s home.

Utarti said that when the trafficking survivor applied for a T visa, law enforcement officials interviewed her, and they contacted her client’s siblings in her home country for the investigation.

“So it’s very scary for that person to have that situation where there are a lot of people talking about you,” Utarti said.

Steven Merrill, a supervisory special agent at the FBI’s San Francisco office, said agents sometimes travel to home countries of trafficked victims, but it is rare.

He said the hardest part for investigators in trafficking cases is that in many cases victims are unwilling to share their stories of victimization.

“There’s a variety of reasons why that may be, but that will always remain a difficulty from the FBI and any other law enforcement’s perspective in accomplishing our mission to put human traffickers — to convict them in court,” Merrill said.

In cases in which the T visa program works, it offers trafficking victims freedom to emerge from oppressive situations and live and work in the country.

A 63-year-old Bay Area woman who was trafficked from Peru to the U.S. by her brother-in-law said she was paid $80 every 15 days for working at his house in Los Angeles.

The woman, who requested anonymity for fear that her trafficker might track her down, said in an interview that she worked about 14 hours a day, seven days a week. She said he forbade her from contacting her family in Lima, Peru.

After fleeing the situation, she was helped by the attorneys at Santa Clara University to obtain a T visa, and she is now free to live and work in the U.S.

U.S. Citizenship and Immigration Services has sought to raise public awareness of the T visa program. Sharon Rummery, the agency’s spokeswoman in San Francisco, said her office has provided training nationwide to law enforcement, community-based organizations and the media, to explain the T visa and similar programs.

Some human trafficking experts said that building a life in the U.S. after receiving a T visa is challenging for survivors because they feel isolated, and have trouble finding long-term housing and accessing victim services.

Denise Brennan, an associate professor and chair of the anthropology department at Georgetown University, said that in contrast to trafficking survivors, political and economic refugees tend to settle in communities where others from their communities are located.

Mollie Ring, chief of programs at Standing Against Global Exploitation, a nonprofit group that provides services to trafficking victims, said it is tough for her clients to find affordable housing in San Francisco after they leave short-term, transitional housing.

Victims, she said, face a dilemma: “A client sometimes leaves the Bay Area in order to find a reasonable quality of life. But that means that they are disconnected from services. So it’s some of the Catch-22 there.”