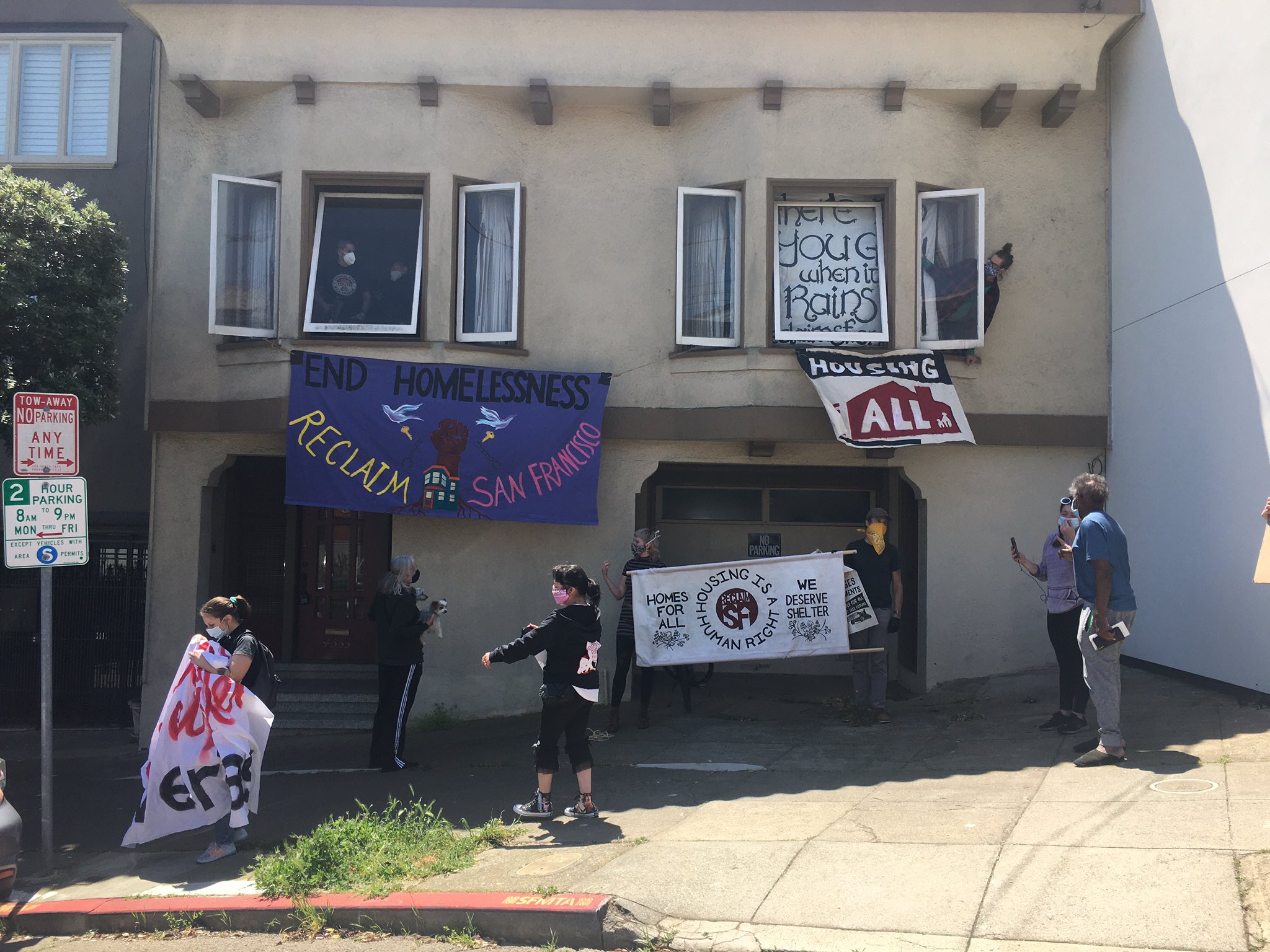 Two homeless women staged an occupation of  a vacant single-family home Friday in the Castro in a move aimed at drawing more attention to their demand that the city move more quickly to shelter homeless people during the COVID-19 pandemic. They hung banners outside with messages such as “End homelessness, reclaim San Francisco” and “Housing is a human right” and attracted protesters and neighbors supporting the action before leaving several hours later after negotiations with police.

The two women are leaders of ReclaimSF, a newly formed group that advocates for housing for the homeless, with an emphasis on filling vacant properties. Couper Orona became homeless 10 years ago, when she was injured while working as a firefighter. She now uses her medical knowledge to treat fellow homeless individuals. Jess Gonzalez, a dog walker, was evicted from her apartment last year and has been living in her car.

San Francisco Police officers responded to the 4500 block of 19th Street for a report of people blocking the street. One woman was cited and released. A video circulating on social media showed police physically detaining a protester.

“The lives of two women who are brilliant contributors to San Francisco are at stake,” said Jennifer Friedenbach, executive director of the Coalition on Homelessness. “It shows how messed up our values are.”

The city says it has housed over 1,000 people in hotel rooms and secured 2,700 rooms. But thousands of people still live on the street and in shelters, where they are often not able to practice social distancing.

Homeless people and their advocates were calling for increased access to housing in the Bay Area before the pandemic hit. Last year, four activists from Moms 4 Housing occupied a vacant home in Oakland to bring attention to the city’s housing and homelessness issues. In January, the group reached an agreement to buy the home through the Oakland Community Land Trust.

San Francisco voters want change, too. In 2018, they approved Proposition C, aka “Our City Our Home,” a measure that would use business taxes to fund homelessness and housing services. A lawsuit brought by Howard Jarvis Taxpayers Association has stalled the collection of funds.

Now that COVID-19 has created a public health crisis for people living on the street, calls for action are growing louder. On Thursday evening, dozens of activists, faith leaders and unhoused residents held signs and feigned death by lying on the ground in front of Mayor London Breed’s home. Like Orona and Gonzalez, they were there to protest what they called blatant inaction by the city to protect more homeless people from the virus by moving them into hotel rooms.

The city maintains that it is doing its best. “In terms of our total homeless population, San Francisco has done more than any city in the country to move people into hotels, RVs, and other alternative housing sites,” said Andy Lynch, press director for Mayor London Breed.

“We have over 1,000 people right now who are in hotel rooms that we have secured, opened, and properly staffed to help ensure the safety of both the residents and the people working at these sites,” he said. “We’re continuing to move more people into these sites every day as we respond to this pandemic.”

The vacant property that was occupied by Orona and Gonzalez had been empty for four years. The property is one of 30,000 vacant residential properties in San Francisco — properties some say are contributing to the city’s housing crisis. In January 2019, a vacant property tax on all privately owned property went into effect in Oakland. In November, San Francisco voters approved a proposition to tax vacant commercial properties.

According to Jennifer Friedenbach, San Francisco has a long history of occupying vacant properties through organizations like “Homes Not Jails,” an offshoot of the San Francisco Tenants Union. She said she hopes to see more squatter protests in the future.

“Homelessness is a public health problem and this pandemic has really shined a light on that,” she said. “We’d like to see a whole new world coming out of this pandemic with everyone having a safe and decent place to call home.”

–  Brian Howey and Laura Wenus contributed to this story

CORRECTION: Two misspellings of Jess Gonzalez’s name have been corrected.