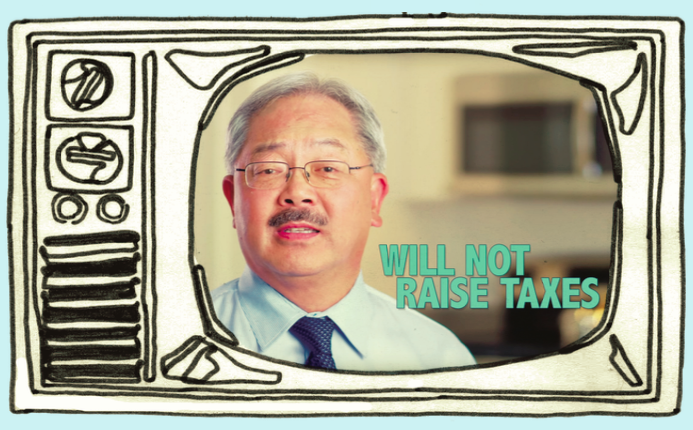 In an ad for his signature affordable housing bond measure, Mayor Ed Lee reassured voters that taxes would not go up. But prior to the election, the City Controller’s office estimated that passing the bond could cause property taxes to rise from fiscal year 2015-2016 through 2038-2039 by an annual average of $0.0077 per $100 — or about $40 per year — for a half-million-dollar homes.

Meka Boyle, Reporter |
LikeTweet EmailPrint More
Political ads are ephemeral — or so we thought.
The Internet Archive, a San Francisco-based nonprofit organization that started out cataloging the entire web on a regular basis, has branched out to recording television channels 24 hours a day in some major metropolitan areas. As part of a collaboration with news media, it established the TV News Archive, a digital tool anyone can use.
In the two months leading up to the November 2015 vote, the Public Press identified more than 3 ½ hours of television news devoted to propositions and candidates, compared with 26 hours of campaign ads — a ratio of 7-to-1. That might not have been a problem, had the ads not contained a slew of misleading claims, circular citations and inflated numbers. Here is a sampling of some of the worst offending pre-election manipulations, mostly sponsored by short-term rental company Airbnb in its attack on Proposition F last year.

“What if the government required you to report when you’re sleeping in your own home … or even in your own bed? If Prop F passes, San Francisco will be the only city in the country where residents will be forced to do just that.

— Official Text San Francisco Measure F”
Our analysis:
As of February 2015, the city had begun regulating how living spaces were rented out through sites like Airbnb. One rule stipulated that hosts could only rent out entire homes, without being present themselves, for a maximum of 90 days per year. Hosts are supposed to track the days they occupy their homes, and city staff can request those records.
Proposition F would have continued this practice — but it would not have required hosts to note which beds they slept in.
San Francisco’s government is not the only one with this level of regulatory power. Portland, Ore., requires hosts to live in their homes at least 270 days per year, and the city may subpoena personal records to verify this.
Aside from Proposition F’s clauses maintaining the current self-reporting requirement for hosts, the measure’s “official text” did not contain these other statements.
Watch this ad here (or go to sfpr.es/inyourbed).

“Illegal Airbnb hotels are evicting thousands of San Franciscans from their homes and causing rents to skyrocket.

— SAN FRANCISCO EXAMINER, 5/14/15
— NEWYORKTIMES.COM, 7/16/15”
Our analysis:
When a property is perpetually rented out through Airbnb or similar services, the pool of residential housing shrinks. But because hosting platforms do not share all their data with local government, it is impossible to know how much the market has been restricted.
The ad’s wording cannot be found in articles on either the San Francisco Examiner or New York Times websites. But an article published in the Examiner on May 14, 2015, described a report from the city Budget and Legislative Analyst’s office, which posits a connection between high eviction rates and the prevalence of short-term-rentals in some neighborhoods.
Watch this ad here (or go to sfpr.es/evictthousands):

Claims:
“Drunken calls at midnight.
— SF Chronicle 4/10/15, Mayor Ed Lee”
Our analysis:
The TV ad seems to attribute the quote to both the San Francisco Chronicle and Lee himself.
In reality, Chronicle columnists Phil Matier and Andy Ross had been told by unidentified attendees that Lee said this — though the authors named 10 “bigwigs” who were there. The columnists wrote: “Lee darkly warned them that a Peskin victory over Christensen would mean a return to ‘the days of drunken calls at midnight.’”
Watch this ad here (or go to sfpr.es/madmen-peskin):

Claims:
“Prop F will allow government to collect people’s private information and then make that information . . . public.
— Consumer Watchdog 6/9/15
— Official Text San Francisco Measure F”
Our analysis:
This wording did not appear in Proposition F’s text. And the Consumer Watchdog article that featured it, if it ever existed, is no longer available online.
Proposition F would have required listing sites like Airbnb to hand City Hall quarterly reports showing how many nights each property had been used as a short-term rental. Officials would use this information to locate the hosts who rented out their homes for more than the allowed number of days per year. The reports would have identified each property by a registration number.
The city’s voter pamphlet featured an argument, paid for by technology advocacy group sf.citi, that stated Proposition F would make the reports “public information available to anyone wishing to peek into people’s private lives.” That argument did not mention that a host “registry” already exists and is available for public review. The registry does not account for the many hosts who choose not to identify themselves to City Hall.
Watch this ad here (or go to sfpr.es/hostsinfo):

Claims:
“Critically needed homes for low- and middle-income San Franciscans without raising taxes.”
Our analysis:
In an ad for his signature measure, fMayor Ed Lee reassured voters that taxes would not go up if they passed the $310 million bond for affordable housing.
But prior to the election, the City Controller’s office estimated that passing the bond could cause property taxes to rise from fiscal year 2015-2016 through 2038-2039 by an annual average of $0.0077 per $100 — or about $40 per year — for a half-million-dollar home.
To watch this ad here (or go to sfpr.es/raisingtaxes):

Claims:
“It goes too far.”
“It’s just too extreme.”
Our analysis:
These phrases were the backbone of the anti-Proposition F television ad campaign, created by Democratic media strategist Joe Slade White & Co. Politicians and TV news reports parroted these statements, creating an echo chamber for voters. At no time did the ads explain what was “too far” or “too extreme” about the measure.
In one ad, Lt. Gov. Gavin Newsom, Lee’s predecessor as mayor, repeated the same phrases. The wording, verbatim, also appeared in arguments opposing the measure in the city’s voter pamphlet.
Watch this ad here (or go to sfpr.es/tooextreme):

Claims:
“NY hotels are spending hundreds of thousands of dollars to tell San Francisco how to vote.
They want to protect price-gouging rates to maximize their corporate profits.”
Our analysis:
Ethics Commission records show that ShareBetter SF, which supported Proposition F, reported Oct. 23 that the Hotel Association of New York City Inc. had contributed $250,000. But four days later the committee amended its filing, saying that all but $25,000 had been “cancelled by contributor.” The next day, this “No on F” ad ran during “Family Feud” on CBS affiliate KPIX, citing the original figure. Timing aside, the airwaves were thick with hypocrisy — a $9 million campaign funded by the $25 billion hotel competitor Airbnb, which sought to guard its bottom line, attacking hotels for trying to “maximize their corporate profits.” Family feud indeed.
Watch the ad here (or  go to: sfpr.es/nycityhotels):