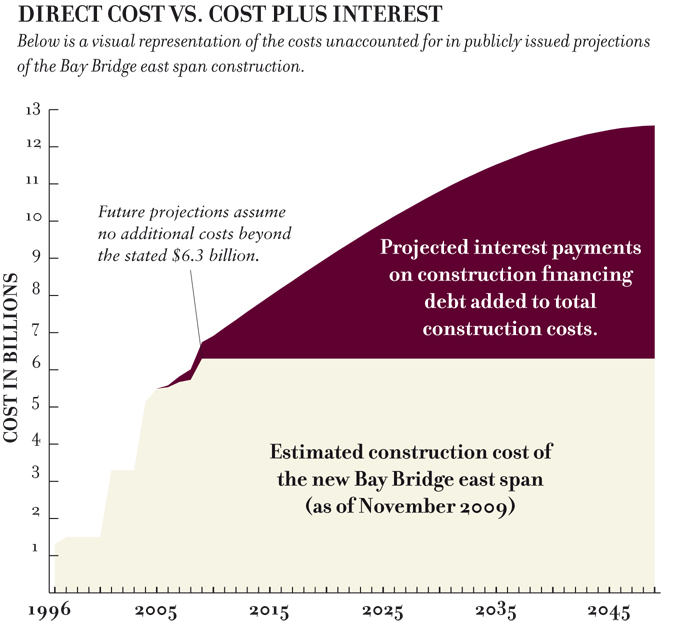 Overall cost estimates have been presented to the public in annual reports and press briefings, but the cost of interest on money borrowed to pay for construction has not been included.

When asked whether debt service had been included in the price quoted to the public, Brian Mayhew, chief financial officer of the Bay Area Toll Authority (and of the Metropolitan Transportation Commission), conceded that it had not.

This is not surprising, because few, if any, government agencies will include that factor in major capital projects when discussing them publicly. As Mayhew underscores, it’s not an underhanded practice to exclude debt service interest in Bay Bridge costs estimates. All the numbers necessary to do the math are broken down in agency financial reports—although few taxpayers bother to read them—giving BATA a strong defense if anyone were to accuse it of trying to hide something. It’s there in black and white.

Mayhew was asked, “Does BATA have an internal formula for apportioning interest to specific toll bridge projects?” He said the agency did not.

Without a closer examination of intra-agency correspondence and finance records, this statement is difficult to verify independently. Municipal finance consultants say that all major capital projects have cost-benefit analyses made. But no such analysis has yet emerged from the records for the Bay Bridge east span.

But there are means to externally calculate the range of possible total costs of the project. They can be defended if properly qualified. Mayhew said our numbers sounded right to him.

Our assessment—that the ultimate cost of the east span could exceed $12 billion—is conservative. It could be overly conservative, if construction costs increase even more during the coming four years, before the new span is scheduled to open.

Here’s how we’ve based our calculations on information published by the Toll Bridge Program Oversight Committee:

DIRECT COSTS: In July 2009, the projected budget for the Bay Bridge’s east span was:

ALL SEISMIC RETROFITTING & REPLACEMENT (R&R)—DIRECT COSTS: It is important to note that the east span is an integral part of the overall seismic retrofitting and replacement program for all seven Bay Area toll bridges under BATA’s purview (the Golden Gate excepted). In July 2009, the latest information available, the total estimated direct cost for the entire program—which includes the Bay Bridge east span—was $8,685,000,000.

ALL SEISMIC R&R—PROJECTED INTEREST: According to the latest numbers in November 2009, the interest to be paid on the outstanding money borrowed for the seismic retrofitting and replacement project is projected to be $7,991,193,147 between 2010 and 2049, when the currently outstanding bonds are paid off.

This story is part of a special reporting project that first appeared Dec. 8, 2009, in the San Francisco Panorama, a single-edition broadsheet newspaper published by McSweeney's. The project, conducted by SF Public Press, was researched and written by Patricia Decker and Robert Porterfield with the assistance of Mike Adamick, Andrew Bertolina, Richard Pestorich and Michael Winter. The project was supervised by Public Press director Michael Stoll. More than 140 people helped to fund this reporting project by donating through Spot.Us.

Robert Porterfield is a journalist with more than thirty-five years of experience who has worked as a reporter at the Boston Globe, Newsday, and the Associated Press.