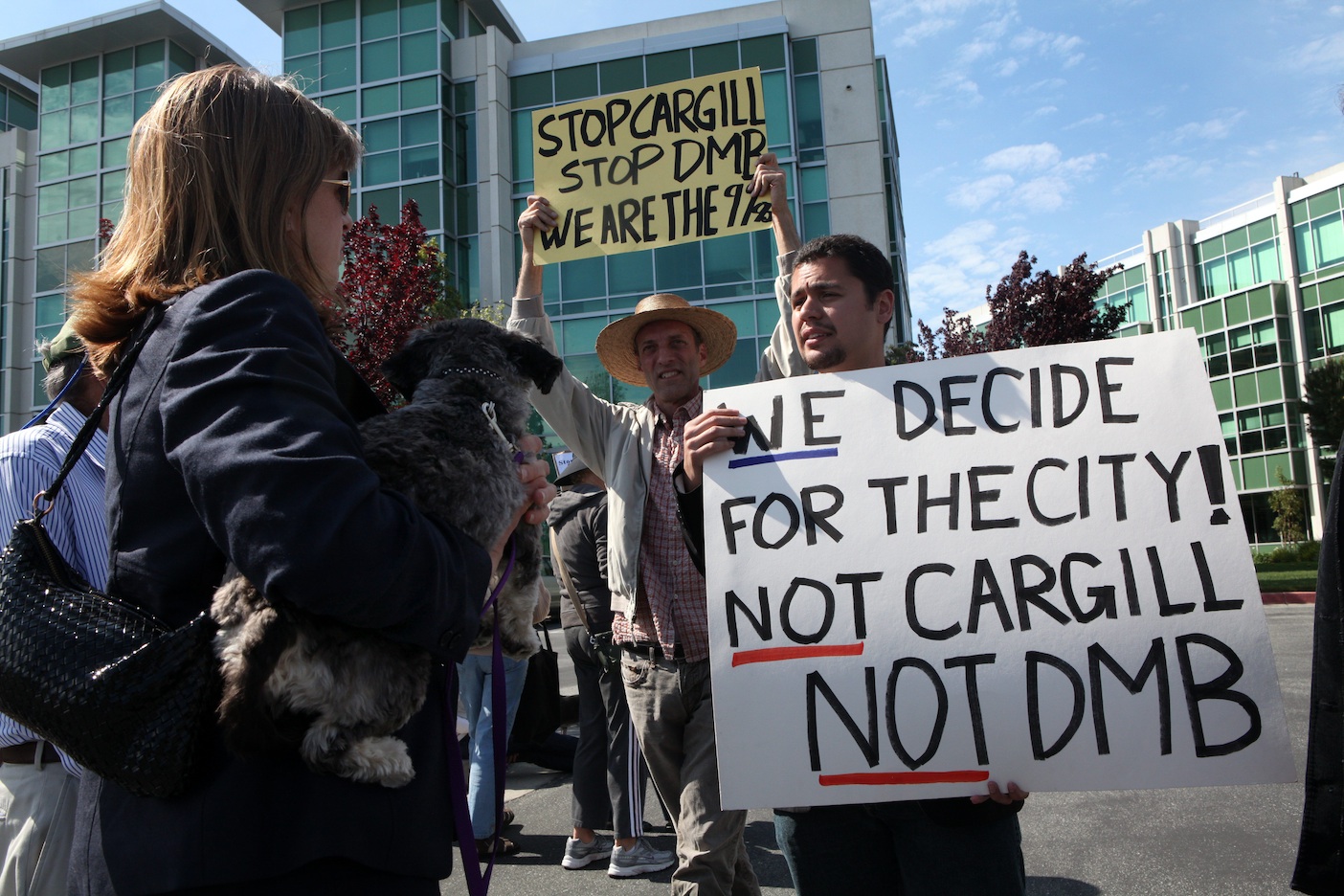 Protesters with Occupy Redwood City take a stand in the heated debate about the proposed housing development on the old Cargill salt flats, which jut out into San Francisco Bay. Developers, though, say the project is smart growth. Photo by Audrey Whitmeyer-Weathers / SF Public Press.

At a community meeting in March, Debbie Baccigalupi, a tea party activist, listened to James Lee, an Occupy movement activist, tell Bay Area “smart growth” planners they were not operating inclusively. As the session ended, she asked if they could meet for lunch to discuss joining forces.

“Occupiers don’t believe in private property, and I think that’s the big divide,” Baccigalupi said. “But they felt the plan didn’t include enough people, and I have to agree with that.”

The forum, held in Oakland, was one of numerous public meetings planners started holding across the region before the modern-day tea party movement and Occupy Wall Street even came into being. But in the last year organized activists on both political sides have dominated the discussion.

Baccigalupi, a South Bay biotech consultant who described herself as a supporter of private property and limited government, told Lee that if they could establish “common ground” they could oppose Plan Bay Area more effectively.

The two have spoken over the phone a couple of times, though they have yet to meet again. Lee, who is a media spokesman for a group calling itself Occupy Redwood City, said his comrades were “open to collaborations.”

So far, Plan Bay Area — an ambitious regional blueprint for dense urban communities convenient for walking and public transit — seems to have more strident critics than defenders. Some libertarians, liberal Democrats, environmentalists, professional urban planners and anti-capitalist Occupiers have all found issue with parts of the plan, and the way its authors have sought public opinion.

Critics’ concerns include inappropriate siting of “priority development areas,” lack of transparency, inflated growth projections and even fears (among right-wingers) that this is a first step in a United Nations plot to establish global government.

Sorting through these myriad issues, the far sides of the political and ideological spectrum are sometimes finding common cause to rally against regional planning.

“Certainly we have some common interests here,” Lee said. “Unlike them, I do like the idea of smart growth. I think local agencies should be working together and planning for growth, but the process is being subverted here.”

While the plan protects open space across the region, some controversial developments remain.

Lee said developers’ plans to build homes on 542 acres of Redwood City’s low-lying salt ponds far away from downtown or the Caltrain station was an example of how the regional plan failed to meet its own environmental goals: “What we are seeing is big projects like these are being pushed through in the name of smart growth.”

Since March, following sustained protests by environmentalists and nearby residents, developers said they would scale back the geographic scope of the Saltworks development, though it is unclear how many houses will ultimately skirt the bay.

In at least 20 public meetings with regional planners in all nine Bay Area counties since January 2011, tea party activists and others espousing conservative views have been the most vociferous and the most organized in their opposition.

Having come late to the party (regional planners started engaging the public in the process nearly five years ago) the activists used the Internet to organize attendance at the meetings, where they spent hours condemning the proceedings as an effort to take away their freedom to live where they want and drive their cars.

While some of the comments may seem paranoid, others are merely hyperbolic.

“I want all of you people doing this regional planning and social engineering of all of our lives, we are here telling you no!” said Heather Gass, a real estate agent and tea party activist from Danville, at a March planning meeting in Oakland. She called regional planning “coercive,” to scattered applause.

“This whole body is unconstitutional,” she told board members of the Association of Bay Area Governments, the lead regional planning agency whose leadership is chosen by local officials, not by plebiscite. “What you are doing is wrong.”

Occupiers, on the other hand, have been more muted in their criticism.

At the same meeting where Gass laid into regional planners, Lee stepped up to the microphone, with a ballpoint pen tucked behind his left ear, shuffling papers, looking more like a planner himself than a rabble-rousing activist.

“Increasing connectivity usually means increasing road capacity,” he said, critiquing rural priority development areas poorly served by public transit. “Which opens up the door for developers to come in and say, ‘Hey, you have great connectivity now, why not put some more apartment buildings in here and housing in here?’”

His mild demeanor drew chuckles from the audience. “We kindly ask — er, kindly demand — that you remove the rural PDAs from consideration.”

Understandably, some Bay Area Occupiers have also joined with green groups like the Sierra Club and Greenbelt Alliance to urge the planners to reject proposals to designate certain “priority development areas.”

Some of these higher-density zones would rise in sparsely populated coastal communities, such as San Mateo County’s unincorporated Miramar, Moss Beach and El Granada. Promoting growth so far from the urban core, they say, is “greenwashing” — an attempt by business interests to open tracts of protected land to development.

Tea partiers, too, are skeptical of rural development areas.  They oppose what they call “centralized planning”: favoring public transit instead of private cars and “stack and pack” housing instead of single-family homes. They say they are defending civil liberties and the freedom to choose how and where they want to live.

“I’m literally fighting side by side with people from the Sierra Club who are opposed to this plan,” Gass said. She would like to see the Plan Bay Area killed and the repeal of Senate Bill 375, the 2008 state law that requires regional plans across California to reduce greenhouse gases from auto travel.

“Occupiers, liberal-left environmentalists — I’ll work with anybody and everybody who wants to oppose this plan,” Gass said. “To me this is not about left and right, this is about right and wrong.”

Planners, however, express exasperation about how tea party activists have been disrupting the public workshops and shutting down debate.

At a January San Carlos City Council meeting, opponents of smart growth called councilmembers “Nazis” and “fascists.” A similar incident at a meeting in Santa Rosa resulted in a call to the police to restore order.

Ken Kirkey, chief planner at the Association of Bay Area Governments, said the hysteria has tended to eclipse the more substantive critiques of the plan: “For most communities when we actually look at the feedback we’re receiving, besides the noise and the press, it wasn’t like, ‘Oh my God, this is insane, I don’t want to grow.’ Their issue was, ‘How do we move this forward? How do we make this happen?’”