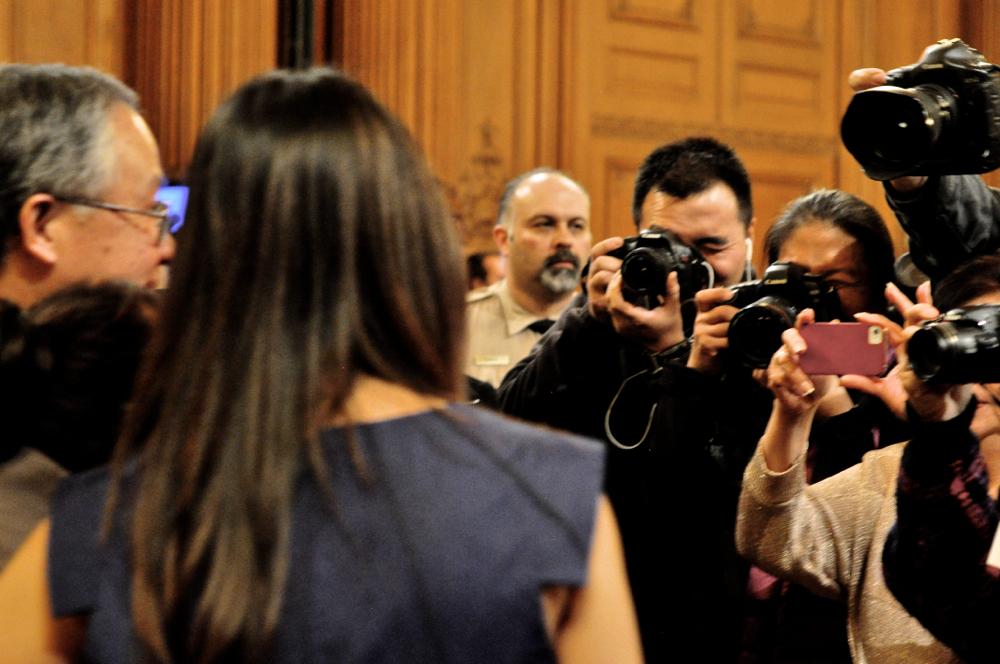 With pedestrian deaths reaching a high point in San Francisco last year, elected leaders vowed Tuesday to address a problem that killed 20 people in 2013. The issue was given a new sense of urgency with the tragic death of another pedestrian just outside City Hall shortly after the supervisors’ weekly meeting concluded.

“This is an important public safety issue for everyone, but we also know that this is an equity issue,” Supervisor Jane Kim said. She called it “a serious wake-up call in terms of what is our commitment to making the city a safer place.”

The death on Tuesday at about 6 p.m., on Van Ness Avenue near the Grove Street, followed three other pedestrian fatalities on New Year’s Eve. In one of the accidents the driver had been working for Uber shuttling passengers earlier in the evening.

“I just wanted to say that today I’ll be looking closely with my office into the various factors of this new so-called ride-sharing platform,” Supervisor Eric Mar said. “Companies like Uber have been slow to answer questions.”

Mar said that while he recognized that the new services fill needs for communities not met by traditional transit options, the city should not allow companies to write their own rules. He questioned their corporate liability, and called for a hearing to look into creating additional local regulations on top of state licensing requirements approved last year by the California Public Utilities Commission.

Since Lyft’s pink mustaches started growing all over the city, taxi drivers have voiced concerns that the ride-sharing services are an unfair competition because their drivers are not burdened by the same regulatory costs and are unsafe alternatives to licensed cabs.

Several people affiliated with the cab industry used the New Year’s Eve accident involving the Uber driver as an opportunity to renew their objections to ride-sharing during public comment on Tuesday.

“The company itself, Uber, is attempting to deny responsibility because their driver — who was logged in seeking a passenger — didn’t have one,” cab driver Mark Gruber said. “We warned them time and time again about the gaps in insurance, and it fell on deaf ears. I think there is some responsibility on the part of the city, because you could have nipped this in the bud.”

“This was bound to happen unless some action was taken against these ride-share companies,” Mary McGuire told the board. “When I drive my taxi anyone and everyone is covered. There are no gaps. We’re covered by a million dollars in insurance.”

Beyond the concerns about ride-share drivers, some supervisors called on the police to ramp up traffic patrols.

Wiener said that, without sounding critical of the Police Department, and understanding that there is a shortage of officers, he wished the department would focus on enforcement as it hires more officers.

“It seems like with each project, even just improving one intersection, it’s a constant struggle. It takes too long,” he said. “It’s like constantly walking on eggshells, and the projects are constantly at risk of falling off the track or dying or getting severely watered down.”

Supervisor Norman Yee, whose grandfather was killed by a car, was emotionally shaken by the discussion.

“When we talk about education, they talk about pedestrian education,” Yee said. “I think we need to spend more time on figuring out what’s the best method to do driver education.”

On Jan. 16, the neighborhood services and safety committee and Police Commission will hold a joint hearing at 5 p.m. in the board’s chambers to address traffic enforcement, Supervisor David Campos said.

In other news, board President David Chiu introduced a proposal to set aside $2.5 million in property tax revenue to assist nonprofit organizations facing displacement. A working group convened last year by Kim would decide the best way to allocate that money, Chiu said.

Campos announced that the Universal Health Counsel has concluded that Healthy San Francisco is compatible with Obamacare.

“It allows us to supplement the gaps that will remain with the Affordable Care Act,” Campos said. “We are the only city in the country that will be able to fill in the gaps.”

Correction 1/8/14: A previous version of this article used the wrong first name for Supervisor Scott Wiener.