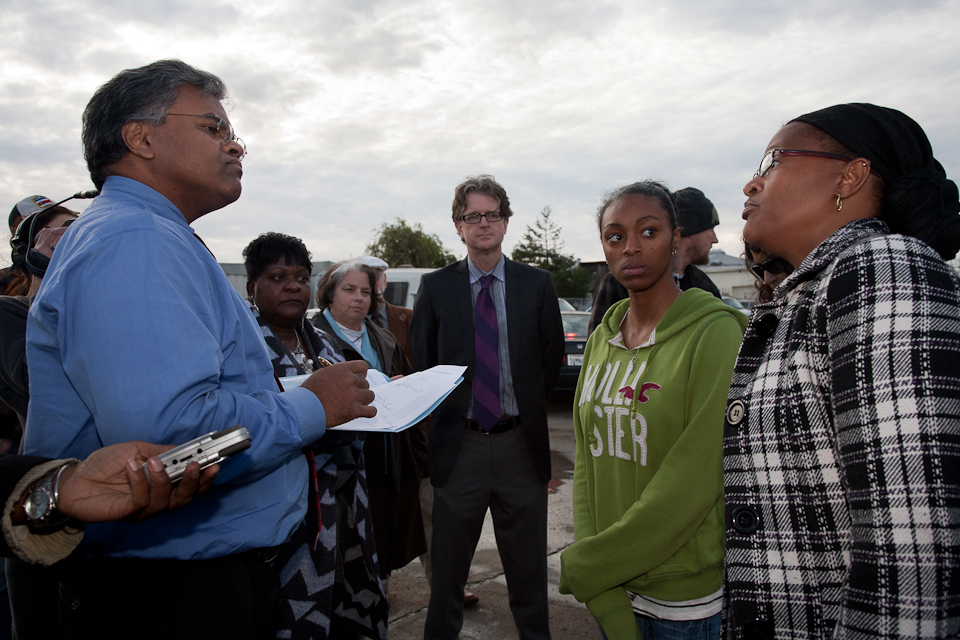 A year after the dissolution of the Restoration Advisory Board for Hunters Point Shipyard, the Navy says it will introduce a new community involvement plan that it says emphasizes diversity.

The announcement follows the White House’s reconvened interagency effort on environmental justice, which held its first meeting under the Obama administration in September. The group is creating a four-year road map to develop “stronger community relationships” and targets “overburdened communities.” The next meeting is set for April.

But longtime Bayview residents are skeptical about local agencies’ interest in community involvement since the advisory board’s dissolution. While government officials and activists both say that engaging the community in the cleanup process has not worked as intended, few of those involved are willing to accept blame for the communication failures.

In December, activists met with officials from the federal Environmental Protection Agency to tour the shipyard and adjacent public facilities built on or near land contaminated with PCBs and other toxins, such as a school basketball court downwind from an excavation of soil laden with naturally occurring asbestos.

Activists also said that the Navy’s unilateral dissolution of the Restoration Advisory Board in December 2009 enabled it to “fast track” major decisions while disregarding community concerns. The biggest decision was the approval of the environmental impact report for the second phase of a redevelopment plan for the neighborhood that will ultimately bring 10,500 homes to the area.

Navy records described the advisory board as “unproductive,” and an EPA spokesman said the Navy’s new “community involvement plan,” due to be released sometime in the next two months, will reboot community engagement.

The Navy and EPA interviewed more than 70 community organizations and leaders to develop the plan, which aims to increase public involvement in the Hunters Point Shipyard cleanup.

They said that the advisory board meetings were poorly attended — some, they said, just barely made quorum.

Keith Forman, the Navy’s regional base realignment and closure coordinator, said he plans to cast a wider net in the community than the advisory board ever sought.

“We give them material and they are suppose to take that out of the RAB meeting and disseminate the info,” Forman said. “We didn’t see that going on at all.”

Since dissolving the advisory board, the Navy has continued to host regular meetings at the Bayview YMCA and meet with neighborhood groups by invitation.

Mark Ripperda, the EPA’s cleanup project manager for three years, said the Navy has not provided an adequate replacement for the advisory board.

“When we did our community interviews, some had never talked to the RAB,” Ripperda said. “The RAB wasn’t reaching the broad section.”

Ripperda said some members of the advisory board proved unable to move beyond certain technical details such as development, earthquake safety and dust, when they also had to deal with a broader range of questions including excavation, cleanup and water quality.

‘Seen and not heard’

Yet former advisory board member Marie Harrison, who served since its inception in 1994, said she met with many people to explain the cleanup process and what it might mean for community health.

She said some people felt intimidated about asking questions and that the Navy ran “rampant over the community.”

“You know how you tell a child to be seen and not heard,” Harrison said “Well, that’s kind of how I felt the Navy was looking at the community representatives.”

Stancil, who has lived in Bayview-Hunters Point for 58 years, said she does not believe the Navy is sincere about community involvement, and that some cleanup measures have been inadequate.

“They made us promise that they were going to fully clean up,” she said. “And all of a sudden, they started backing down where they don’t do anything.”

Stancil’s frustration at government agencies is echoed in communities throughout the country, and the White House says it is listening.

Mathy Stanislaus, the assistant administrator for the Environmental Protection Agency’s Office of Solid Waste and Emergency Response, met in December with community organizations to tour the shipyard and discuss their concerns.

The visit coincided with the White House’s first forum on environmental justice and formulation of “Plan EJ 2014,” a four-year roadmap  whose goal is stronger community relationships and improved conditions in environmentally “overburdened” communities.

Stanislaus’ department heads the EPA’s Community Engagement Initiative, and says it has committed funding as well as staff to help resolve ongoing struggles at the shipyard cleanup.

Getting the community involved is “a significant component of the cleanup process,” said EPA spokesman Richard Yost in an e-mail. He said the EPA has handed out $400,000 in grants and contacts in the surrounding community. The agency also has provided technical advisers and facilitation, he said.

“Disappointing” is how the Navy’s Forman describes the situation. “It’s a downer. You put a lot of work into these things.”

In a related development, the San Francisco Chronicle reported Saturday that Lennar Urban and the city settled a lawsuit with some environmental groups to reduce the harm to the shoreline and wildlife.

Monica Jensen, the multimedia editor at SF Public Press, is also a volunteer at the “Crosscurrents” news program on KALW Public Radio. She has been documenting a collective art project titled “Welcome to the NeighborHood” in Bayview-Hunters Point. The project has been exhibited in the Sargent Johnson Gallery in the African American Arts and Culture Complex, and will be displayed at Zeum and Art 94124. Jensen is also the winner of an honorable mention from the National Press Photographers Association Best of Photojournalism award.