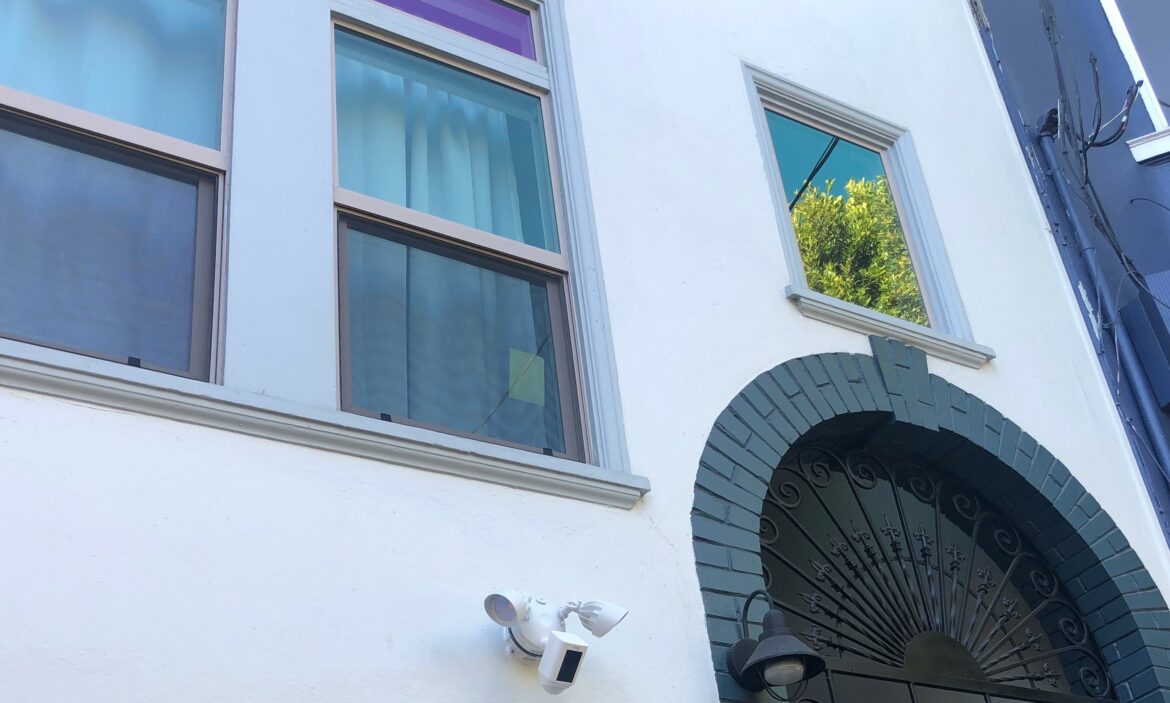 Some Mission District residents have been encouraged to put post-it notes in their windows to signify their interest in joining neighborhood meetings with police.

A series of emails and neighborhood flyers obtained by the Public Press show alliances being formed between police and residents of Woodward, Albion, Camp, Poplar, and Guerrero streets in the Mission.

The collaborations have emerged after residents reached out to Mission Station for assistance in managing tents, drug use and trash on their streets. In response, the station’s designated homeless outreach officers have been guiding residents through several steps to make their streets safer — including installing surveillance cameras, bright outdoor lights and trimming trees and bushes.

Residents have been asked to stick blank post-it notes in their windows to show their interest in participating in neighborhood meetings with the police. A newly formed group, Woodward Street Safe for All, distributed a flyer advising neighbors to “Put a post-it note in your front window to let us know you support this safe-for-everyone initiative. We will see it. No one will know what it means but us.”

On Tuesday, at least half a dozen post-it notes were visible in the windows of houses along Woodward Street.

The call was the same several blocks away on Albion and Camp streets, where a flyer made the rounds in the days before Thanksgiving. On Tuesday, post-it notes were stuck to windows of several houses along both streets.

A police spokesperson said the department has no knowledge about the origins of those post-it notes.

The movement appears to be spreading. A resident of Collingwood Street in the Castro, who spoke with the Public Press on the condition of anonymity due to fear of retaliation from neighbors, said that last week, two Mission Station-based police officers and several people who live along his street knocked on his door, inviting him to a neighborhood meeting to discuss safety. He declined, and voiced his opposition to plans to increase surveillance and add bright lights outside his windows. In the days since, he has received several angry messages from neighbors on social media.

In the Mission, efforts to encourage residents to install surveillance cameras appear to involve, at a minimum, Homeless Outreach Officer John Cathey and his partner, Officer Robert Clendenen. In an email to a Woodward Street resident in September, Cathey said, “If the people on Woodward genuinely want this to end and I believe they do, if they are 100% committed, we can show them how to do this as a team and they’ll be done with this wash rinse and repeat way of life.”

A key element of reducing neighborhood complaints, Cathey said in the same email, is security cameras. He said he and Clendenen had arrested more than 100 people at Mission encampments, many of whom he alleges were caught on video committing a crime.

Use of Ring Surveillance cameras encouraged

The type of security camera recommended is specific. A Woodward resident reported that at a November meeting at the corner of 26th and Poplar streets, Cathey said he supports “Ring security cameras installed at as many houses as possible. If every inch of the block has eyes on it,” he said, crime and trash dumping will end.

SFPD spokesperson Officer Tiffany Hang said the department does not promote any specific brand of camera, but did acknowledge that “Surveillance cameras have been extremely helpful in our investigations.”

Those videos can provide key material for officers to identify suspects and press charges, but Ring cameras come with their share of controversy. The cameras are developed by Amazon and are aggressively targeted to law enforcement agencies as a crime deterrent.

The Ring app, called Neighbors, comes with a feature that allows the camera’s owner to share surveillance footage with police. According to the Electronic Frontier Foundation, Amazon partners with more than 1,300 law enforcement agencies across the country. According to a map provided by Amazon, SFPD does not have an active partnership with Neighbors, though they can request video footage from Ring camera owners outside of the app.

“These partnerships allow police to have a general idea of the location of every Ring camera in town, and to make batch-requests for footage via email to every resident with a camera within an area of interest to police—potentially giving police a one-step process for requesting footage of protests to identify protesters,” EFF wrote on its website in June.

This isn’t the first time the San Francisco Police Department has depended on access to privately owned surveillance cameras. In May and June, when protests raged around the country in the wake of several instances of police violence, SFPD requested access to a large private surveillance network in Union Square, installed by a tech executive.

Ring cameras, however, are much more widespread across the city. The platform that accompanies the camera makes it easy to share, with neighbors or the police. With just a couple clicks in an app, SFPD could gain a new level of access to our streets with each camera installed.