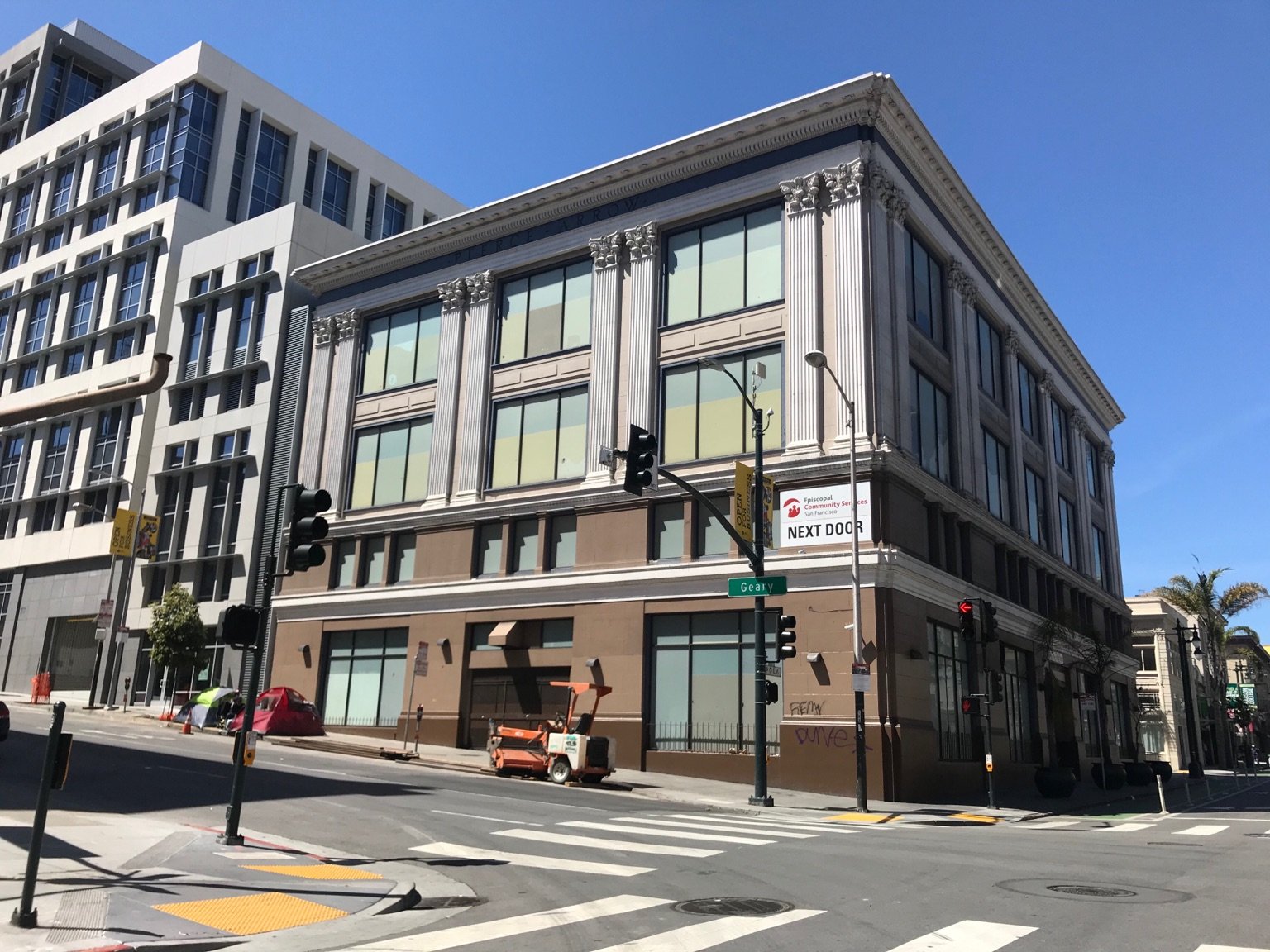 Next Door homeless shelter has ejected residents who failed to meet a new curfew that prohibits inhabitants from leaving for longer than two hours per day, except to work. Lila LaHood / San Francisco Public Press

A homeless shelter in the Tenderloin has ejected at least two residents for violating a policy that bars inhabitants from leaving for more than two hours at a time, according to a tenant advocacy group. The policy was instituted in response to the coronavirus shelter-in-place order.

Directors of two other shelters and an advocate for shelter residents criticized the actions by the Next Door shelter for violating city policies prohibiting unreasonable denial of service.

“My understanding is that we weren’t supposed to be denying service to people, so I don’t know what they were thinking on this,” said Shari Wooldridge, executive director of Multi-Service Center South, San Francisco’s largest-capacity shelter. “We’re working with a clientele that are not necessarily going to adhere to all the rules, but we try to do public safety warnings and talk to them. Having them understand the importance of the safety of everyone in the building is paramount.”

MSC South residents were evacuated to hotel rooms after at least 96 residents tested positive for coronavirus.

The policy is intended as a health and safety measure, said Beth Stokes, director of Episcopal Community Services, a support network for unhoused and low-income people that runs Next Door and several other homeless shelters.

“In compliance with the current shelter-in-place policies and information from the Department of Public Health, we are allowing guests staying in our shelters to leave our facilities to attend to essential activities,” she said in an emailed statement. “However, in order to prioritize the health and safety of vulnerable residents of our shelter facilities, as well as staff, we are not allowing guests to return to shelter if they choose not to shelter-in-place by staying away for extended periods of time for non-essential activities.” Next Door is the city’s second-largest shelter, with 334 beds.

Department of Public Health guidelines say staffers should “make efforts to allow residents to stay in shelters 24/7 if social distancing can be maintained and encourage residents to leave only for essential needs.” The guidelines do not mention time limits for outings or offer advice on how shelter staff should handle residents who do not follow new rules The San Francisco shelter-in-place order does not define time limits for essential outings by the public.

A health department representative was unable to confirm whether the department condoned the new policy at Next Door.

Ambriss Holyfield, a former resident at Next Door, said she had just started her work shift Tuesday morning when she received a call from a shelter staffer who told her that because she had failed to check in with staff after her work shift the previous night, her bed at the shelter had been “dropped,” meaning she would not be allowed to stay there anymore.

A report on the decision, shared with Holyfield’s permission, said she was ejected from the shelter for threatening violence against the staff member who called her. However, the report later states multiple times that she was dropped because “she didn’t check-in [sic] on 4/20/20.”

“I told them where I was going to be,” Holyfield said, adding that after working a double shift at her job on Monday, she decided to stay at a friend’s house — a violation of the shelter-in-place order — because other residents at the shelter keep her up at night. “I needed some sleep so I could go to work. I was told everything would be fine.”

Holyfield had violated a new policy at Next Door, which took effect after city officials announced the shelter-in-place order, that confines residents to the shelter 24 hours per day, except during timed outings. Residents are allowed one hour to run errands, two hours for doctor or social worker appointments, 10 minutes to smoke a cigarette and to report for approved work shifts, Holyfield said.

Stokes said the new policy was an attempt to follow guidelines from the health department on social distancing and sheltering in place.

To thin populations in homeless shelter settings, all of the city’s shelters stopped accepting new residents several weeks ago, and the report detailing Holyfield’s denial of service said she wouldn’t be eligible again for a bed at Next Door until August.

“I’m so mad because they have somewhere to go to at night,” she said of the shelter staff. Holyfield stayed with a friend in Oakland for two nights. On Thursday, she challenged the shelter’s decision at an arbitration meeting between administrators from Next Door and representatives from the Eviction Defense Collaborative, a group that provides free advocacy services to residents at city-funded shelters.

“I’m not sure what was said to who or why or how, but I was granted access back to the building,” she said. “It feels good, especially when you know you’ve not done anything to anybody.” Ben Baczkowski, who represented Holyfield, confirmed that she won the case.

Last year, Holyfield was ejected from Next Door for allegedly assaulting another shelter resident, though the decision was overturned because there was insufficient evidence to support the claim, said Leah Simon-Weisberg, an attorney at Eviction Defense Collaborative, who shared Holyfield’s information with her permission.

Before the viral health crisis, shelters were not allowed to give away a resident’s bed unless they had remained absent from the shelter for several days, Simon-Weisberg said. She called Next Door’s policy “abusive.”

“They’re agents of the government, and the government cannot lock people away or take away housing without due process,” she said. “You don’t get to receive government funding if you’re not following the rules.”

City grievance policies protect shelter clients from being ejected without good reason, Simon-Weisberg said. At least four other residents were denied beds at Next Door for violating the new policy, Holyfield said. Two of those five, including Holyfield, have filed complaints with the Eviction Defense Collaborative, Simon-Weisberg said. She said she wasn’t aware of any shelters other than those run by Episcopal Community Services that have implemented rules denying beds to those who violated shelter-in-place curfews.

“This has been a shelter that we have had ongoing problems with,” Simon-Weisberg said. “The shelter staff has not followed protocol and regularly appear to be abusing their discretion.”

Reasons not to kick people out

In recent meetings between shelter heads and city officials that she attended, officials with the department of homelessness and supportive housing told Simon-Weisberg, “you can’t prevent people from leaving the shelters, and that is not a basis for kicking someone out,” she said.

The homelessness department has told shelter providers to “strongly encourage” shelter residents to follow the shelter-in-place ordinance “in the best interest of their safety and that of the entire community,” said Emily Cohen, a spokeswoman for the department.

“Of course, people can leave for essential business, employment and appointments,” she said. “Unless someone abandons their bed, their shelter stay is not terminated for leaving the shelter.” Cohen did not reply to requests to clarify whether Next Door was allowed to eject clients for violating the shelter’s new policy.

Joe Wilson, executive director of Hospitality House, a city-funded homeless shelter that recently moved its entire population into hotel rooms, said that during the pandemic, shelter directors should be mindful of each resident’s circumstances when determining whether to eject someone for breaking shelter rules.