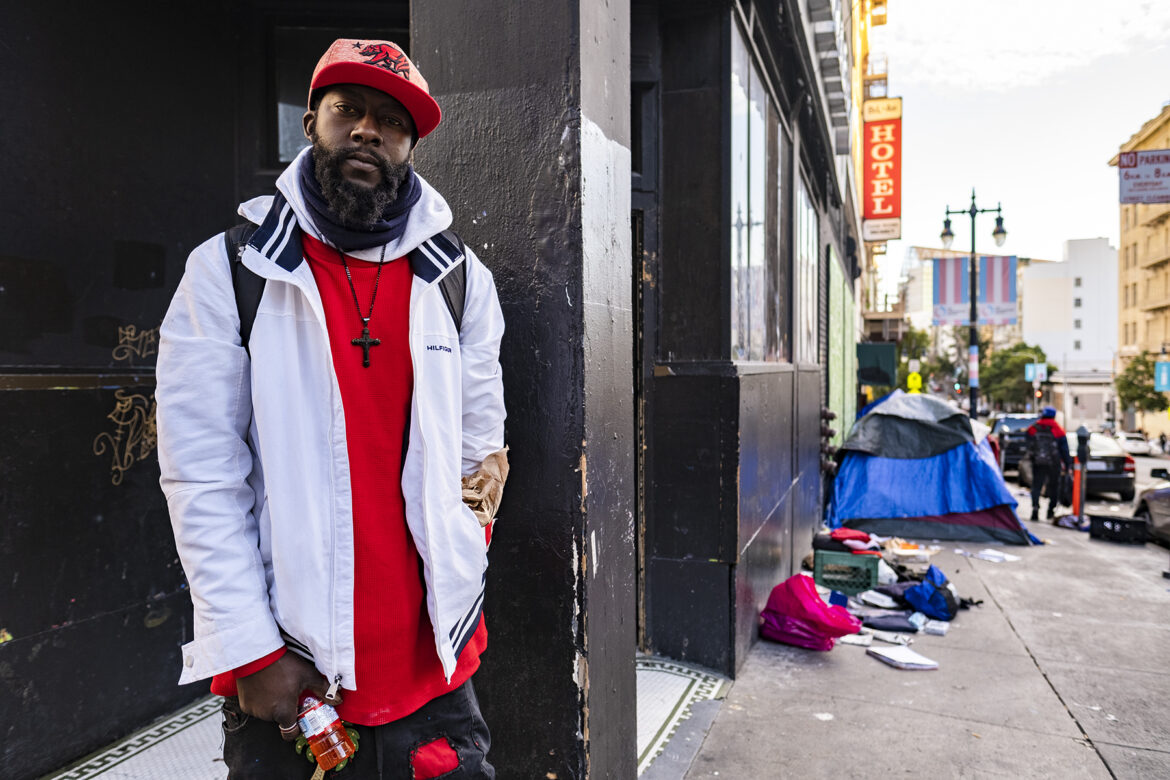 For two years, Jamel Davis camped near this spot at the corner of Eddy and Jones streets in the Tenderloin. Even with unhoused residents like Davis avoiding the use of open flames and other fire hazards, the neighborhood suffered a dozen encampment fires last year.

Jamel Davis smiled and waved at a friend as he crossed Eddy Street in the Tenderloin. He greeted her, and after a brief chat, she hugged him tightly and handed him a bag of takeout food she pulled from the backseat of her car.

Prepared meals and food from nearby social service agencies were key to survival for Davis, who abstained from using open flames inside the tent where he was living — partly because of a scare he got one rainy night.

“Tent fires happen all the time,” he said. “I’m scared of propane because I think I’m going to blow it up. If it cannot be plugged into a USB or USB-C cord, I don’t use it.”

Fires are an ever-present fear for people living on the streets, where an errant spark could send flames ripping through a tent or other temporary shelter, sending its contents quickly up in smoke. Unhoused residents who have suffered through this experience report receiving little of the help available to those assisted after fires in buildings.

“People live in encampments because it’s the best possible option,” for those who are unsheltered, said Coco Auerswald, a professor in the UC Berkeley School of Public Health. “Anyone living in a situation like that is in danger of fires, and those fires are basically because of the circumstances of people leading their daily life.”

San Francisco fires have surged over the last two years, Mission Local found. Fires associated with homeless encampments rose by more than two-thirds during the first year of the pandemic, according to a Public Press analysis of the narrative texts from San Francisco Fire Department reports. The number of those kinds of fires reported jumped to 652 in the 12 months ending Feb. 28, 2021, from 383 a year earlier.

Open flames were used more often as homeless shelters shut down or restricted occupancy, leaving more people on the streets without easy access to electricity and the water that could keep fires from spreading. Many had previously tapped into public water fountains and open outlets at cafes, libraries and other indoor spaces that shut down for months during the first surge of the pandemic.

After March 2021, when the city resumed clearing encampments, reports of fires slowed significantly, and are on track to post a decline this year by Feb. 28. Fires among housed residents are following a similar pattern, with a spike in the first year of the pandemic, and a projected decline in the following year.

The surge in fires highlights the harsh conditions of living without daily life essentials, and the increasing loss of property and shelter that unhoused residents have faced during the pandemic — and could keep confronting as the pandemic continues through variants like delta and omicron.

In 2021, San Francisco proceeded with plans to shut down seven hotels that used to house hundreds of people who previously had been living on the streets. But as coronavirus infections began to rise once more, homeless shelters that were expanding capacity began limiting beds again to avoid the kind of coronavirus outbreaks that affected dozens of residents during 2020.

Even though they’ve begun to decline, fires among the unhoused are unlikely to abate completely. Those living without a fixed residence must still find ways to light their living spaces, prepare food and keep warm. For many, fires are the most affordable and accessible option.

During the first surge of the pandemic, the most common fire calls associated with homeless encampments were outside trash fires. Those incidents jumped more than a third in 2020, to 298 from the previous year’s 216 and continued at a similar pace in 2021. More than half of those fires were used for warmth, according to narratives in fire reports.

These narratives are based on “the totality of circumstances at a given incident,” wrote Lt. Jonathan Baxter, the fire department’s public information officer, in an email. “In some cases, you have a person who stated this happened; in other cases, you can see the heating and cooking paraphernalia.”

The rise in fires “is most likely attributed to the rise in nontraditional housed individuals, encampments, and open flame use,” Baxter wrote.

Fires also increased among people living in houses and apartment buildings, according to fire reports from the San Francisco Open Data portal. During the first surge of the pandemic, residents reported 6,239 fires — a 20% increase from a year earlier, while cooking fires jumped more than 40%, to 1,081.

The increase in fires tracks with residents spending more time in their homes while sheltering in place and working remotely, thus using more heat and electricity than in previous years. Tent fires more than tripled to 152 during the first year of the pandemic, up from 45 the previous year. At least one person involved in those fires was transported to a burn center. Another unhoused resident was found dead in a burn pile after firefighters extinguished a fire.

“Living in California, anytime a fire is started, there is cause for concern. It’s unfair to say only fires from unhoused residents are dangerous,” Denny Machuca-Grebe, a spokesperson for the Homelessness and Supportive Housing Department, wrote in an email. “There are times when even lighting a fire in your backyard firepit can be dangerous. Fires are always a public safety concern.”

Jamel Davis said he believes many of these tent fires could be prevented if the city provided places where unhoused residents could access electricity and heat. After receiving a room at Cova Hotel on Dec. 27, 2021, Davis began charging devices from friends who were still living near his old camp site.

Unhoused residents unable to use cafes, libraries, grocery store lounges or other safe locations with power outlets have sometimes resorted to tapping into electric poles and outdoor outlets to charge devices that are their lifelines to friends, relatives and services. While the fire department was called only three times for faulty wiring connections during the pandemic, tapping into outdoor electricity can be risky, especially in wet weather.

Davis recalled the rainy day when he and four friends “had our stuff still plugged in and the cord started popping.” One friend unplugged everything from the light pole. “It was sizzling,” Davis said. “It was like the ‘last warning,’ coming from the pole.” The incident scared him and changed his mindset about tent fire risk.

Tents can also catch fire because people are careless, lighting open flames inside to smoke drugs or dropping lit cigarette butts as they walk by, Davis said. According to fire reports, many tent fires appear to be caused by an open flame source, which accidentally tips over, rekindles, is left unattended or sits too close to materials. Some tent fires were caused by arson.

When unhoused residents lose items due to uncontrolled fire, they generally don’t receive help replacing them. Burned vehicles are towed, accruing debt in tow yards until they are junked.

The American Red Cross can provide unhoused fire victims personal hygiene kits, blankets and tents, as well as referrals to local nonprofit agencies, said Regional Communications Director Cari Dighton. Financial, mental health and social services assistance is also available. But to access these resources, fire victims must request help, provide proof of identity and a residence with an address, and show confirmed disaster damage to their home with, for example, a police or fire department report.

According to narratives in fire reports, the San Francisco Fire Department called the Red Cross to assist unhoused residents once in 2019 and five times in 2021. It made no calls for assistance in 2020, despite the spike in fires.

Firefighters do not provide fire prevention tools to unhoused residents, but they do advise people living in tents or other temporary shelter verbally or with flyers to abstain from using open flames. In small print at the bottom of one flyer, the fire department lists several local shelters in San Francisco as alternative resources for food and warmth, but only one of those — Mother Brown’s Dining Room in the Bayview — offers 24/7 services. Unhoused fire victims needing shelter must seek help through the Red Cross, according to Machuca-Grebe of the Department of Homelessness and Supportive Housing.

The Tenderloin experienced 12 tent encampment fires in 2021, and fire reports determined factors leading to nine of those incidents were people “possibly impaired by alcohol or drugs” and “possibly mentally disabled.”

Down Jones Street from where Davis used to pitch his tent, another small encampment with a dozen tents stretched between Golden Gate Avenue and Turk Street for more than a year until they were cleared when the street project ended in October 2021. Previous city initiatives that had installed concrete barriers to expand walkways and give people in the neighborhood more open space were removed.

At that point, unhoused residents who had pitched tents on this temporary walkway were dispersed to other streets. A few people accepted spots at the Safe Sleep tent site on Turk Street near Jones Street, and a few others were moved into shelter-in-place hotel rooms.

While unhoused residents lived at this encampment, in the evenings, they scavenged for combustibles, building fires to stay warm.

A resident of this camp on Jones Street, who goes by the name Smooth, explained when flames get out of control, “people run from the fire or run on their instincts and put out the fire themselves.” There’s no time to make a 911 phone call, as tents can be quickly consumed in flames.

Calls for help are often left in the hands of a passerby.

“Fire is a survival tool,” said Smooth. “People use it as an everyday essential.”