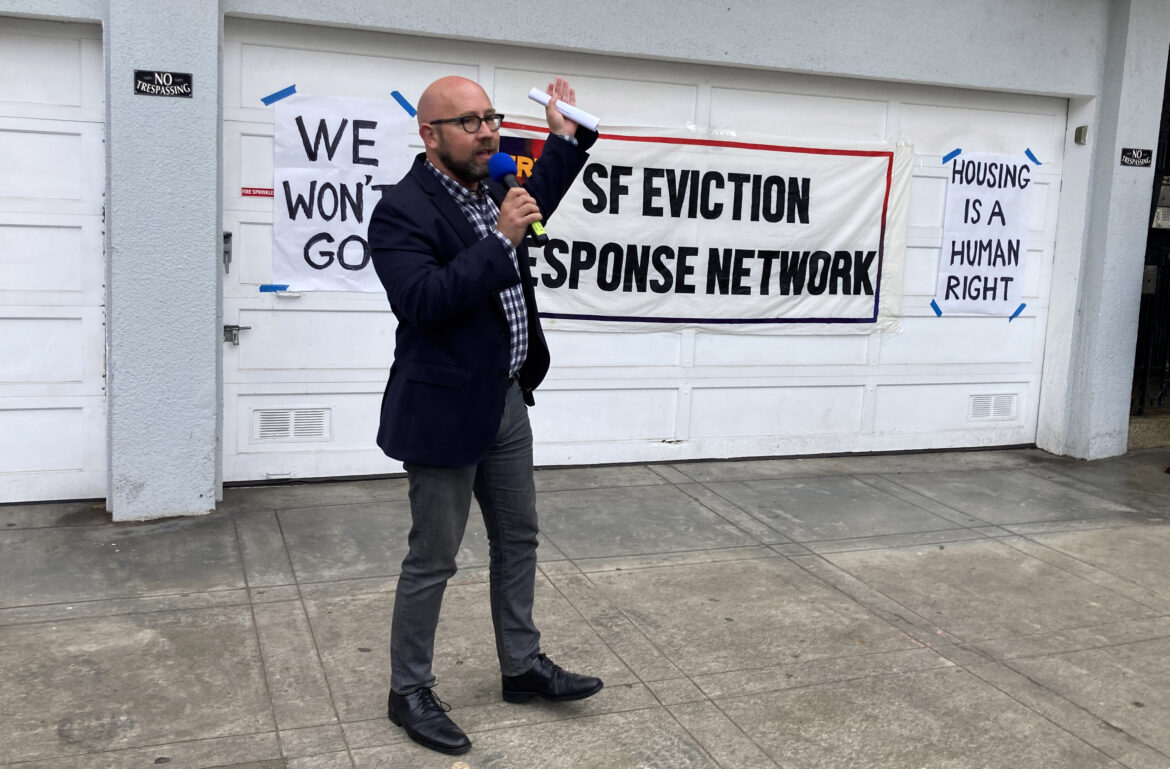 District 8 Supervisor Rafael Mandelman at a protest against evictions from a building on 19th Street.

Amplified chants and drumming broke the weekday calm on 19th Street near Dolores Park in mid-November as residents of a 12-unit building protested their impending eviction.

“Here in this building, six out of the 10 units that are occupied have LGBTQ tenants, five out of the 10 have Asian Americans. And we have seniors in this building who have been here for decades. And we’re all getting evicted,” said Paul Mooney, a gay man who has lived in the building for 18 years and came to San Francisco because of its LGBTQ community.

Tenants, advocates and city legislators are worried about real estate investors buying multi-unit housing properties like this one only to evict all of the tenants and sell the buildings for a profit. They have called for an end to the state law that makes this possible, the Ellis Act, under which the tenants on 19th Street are being evicted. In the meantime, they want the city and the nonprofits it works with to buy those buildings instead of leaving them for speculators to snap up.

“The Ellis Act is devastating neighborhoods like ours, communities like ours,” Mooney said. “There’s 20 of us that are at risk of losing our home from this neighborhood that we’ve lived in for so long. And it’s happening all over the city, because of the Ellis Act.”

But the state Legislature is unlikely to repeal the Ellis Act, one local legislator acknowledged.

“I think everybody here wants to see the Ellis Act repealed. And we all know that real estate and real estate money has tremendous power and influence in Sacramento,” said District 8 Supervisor Rafael Mandelman at the demonstration.

In the meantime, however, local government can step in. Last week, the Board of Supervisors voted to allocate $64 million of revenue brought in by the 2020 real estate transfer tax measure Proposition I to an emergency fund for housing acquisition. Supervisor Dean Preston, who proposed the allocation, said there are signs that speculation is threatening many apartment buildings in the city, and that the allocation could help combat that.

“Preliminary analysis of market trends shows exactly what we fear: A repeat of trends we saw a decade ago,” Preston told the board. “Of 117 buildings between three and 50 units on the private market, 99 of the sellers are individual or families with no connections to big real estate, in contrast to the folks who are lining up to buy these buildings.”

He said members of the city’s Housing Stability Fund Oversight Committee have been keeping a close eye on the buyers of multiunit properties that go on the market and finding that many are limited liability corporations linked to large corporate real estate investment companies.

A program called the Small Sites Acquisition Program already exists. Nonprofit landlords and the city collaborate to acquire housing, keep the tenants in place and keep rents below market rate. The city also has the Community Right to Purchase Act, which gives nonprofit organizations the right to make offers on buildings with three or more housing units, or lots that could accommodate such units, before other buyers.

Some of the supervisors expressed concern that the Small Sites Program is not ready for an acquisition spree and needs serious reform.

“Promising folks that we’re going to save them from eviction because we’re putting money into this program that is not currently viable, to me is an empty promise,” said Supervisor Myrna Melgar. While she supports funding the acquisition of apartment buildings, she said, “It is like putting gas in a car that has two flat tires and is in the shop getting fixed, and promising people a ride.”

Most of the acquisitions executed so far through the program have been made by one nonprofit that is overextended and has taken on excessive financial risk, she said. Other supervisors criticized the program for not preserving enough housing. Since the program was launched in 2014, it has acquired 368 units across 47 buildings.

Mayor London Breed also voiced opposition to the allocation, announcing in a press release that her office would be taking steps to reform the Small Sites Program and allocating up to $10 million from the city’s general fund through June 2022. While the supervisors ultimately voted 8-3 to allocate the $64 million to allow the city to buy housing through any of its acquisition programs, the mayor is not obligated to spend that money and several supervisors expressed doubt that she would. The mayor’s press office did not respond to a request for comment on her intentions.

Preston, for his part, is optimistic.

“These funds are going to be appropriated, they’re going to be available,” he said. And the investment is a significant one in terms of how many people could remain housed if their buildings are acquired by a nonprofit.

“We are looking at hundreds of units,” he said. “It will depend on the exact purchase price of each of those, and the size of the different buildings. But it’ll be hundreds of units and at least double or triple that in amount of people protected.”