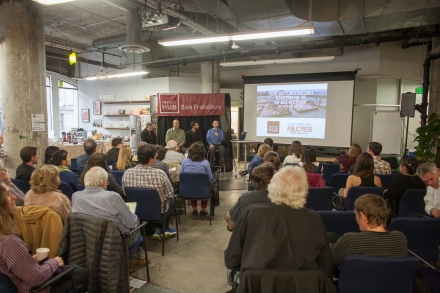 Sea level rise threatens tens of billions of dollars worth of new waterfront development in the Bay Area — but there may be time to adapt.

Stark is one of two lead reporters of the Public Press’ new edition on sea level rise, due to hit newsstands later this month. The front-page investigation, a six-month collaboration of 10 journalists, scientists and cartographers, has so far uncovered dozens of commercial and residential projects planned for areas below 8 feet in elevation. Eight feet represents an unlikely but possible sea level rise scenario for the year 2100, combining maximum sea level rise predictions with a major storm swell.

What does an 8-foot increase look like? Someone standing at the edge of a pier near the Ferry Building would be waist-high in waves, Stark said.

Some of those upcoming projects include new developments in Mission Bay and residential towers planned for Treasure Island.

It is a daunting figure for a region bounded by water. “Are you going to convince me to sell my home in Alameda tonight?” one audience member teased.

But Behar cautioned that an 8-foot rise would be extreme. He was tasked by the city with interpreting competing sea level rise data in 2013, and said most studies expected only 3 feet of rise by 2100.

By and large, state and local governments do not have explicit sea level rise regulations on the books. Environmentalists and the building industry have tussled over whether sea level rise needs to be included in the state’s environmental review process. But Behar said the days of murky rules will soon be over: “We know regulation is coming.”

Will it come fast enough? Hill, a professor of landscape architecture and environmental planning at the University of California, Berkeley, said long-range planning needs to happen soon. She reminded the audience that sea level rise is exponential: The levels will climb slowly, then all at once.

In the meantime, Stark said, many developers are forging ahead with little heed for the advancing water line. One developer, he said, “told me ‘The barbarians aren’t at the gate yet.’ There’s a compartmentalization of understanding of sea level rise and climate change. The knowledge that it’s happening on one hand, and the need for space and houses on the other.”

The two are not necessarily in competition, Hill said. She gave the example of a housing development in Hamburg, Germany with “floodable architecture.” Its plaza welcomes the water in instead of holding it back.

Another plan from Dutch engineers widened a beach to expand the buffer between city and sea. Hill said a similar approach could work in the Bay Area, joking that some are calling the method “shallowing” to avoid its more controversial name: bayfill.

“In 1965, the Bay Conservation and Development Commission was founded to stop the filling of the bay,” Behar added. “Today they’re studying how filling the bay could be a really good idea.”

For more on the data and thinkers behind Bay Area sea rise, look for the Public Press’ new edition on newsstands at the end of May.