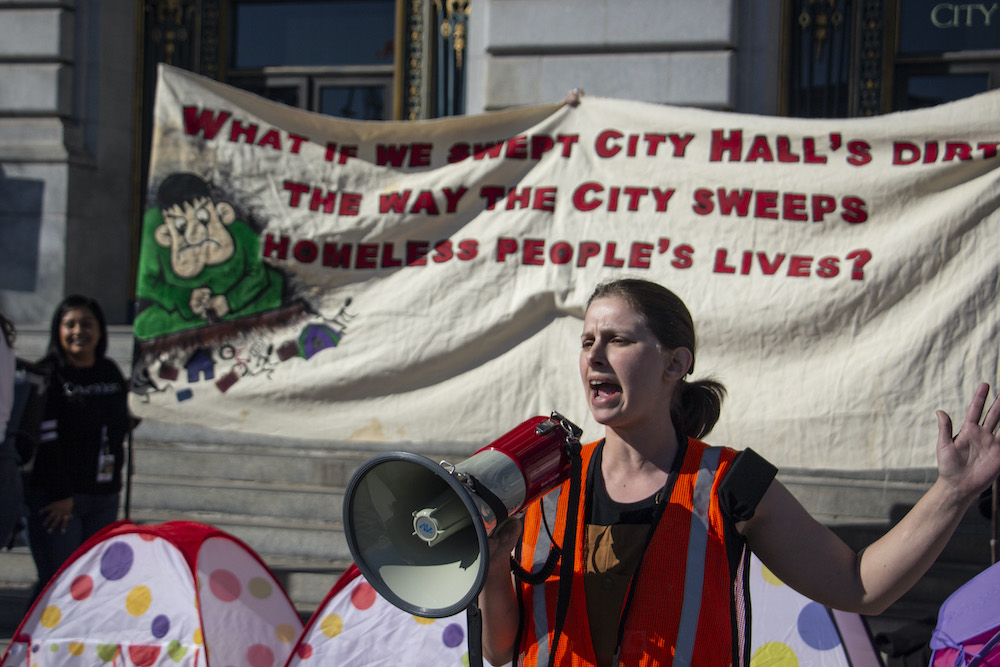 Activist Chelsea Crumpler pretends to be a Public Works employee at a protest on the steps of City Hall Thursday. Demonstrators used brooms to sweep away mock encampments and sang about the shortcomings of the city’s homeless outreach services. Later, officials reported on extensive failures in the city’s response to homelessness in 2019 and offered a list of substantial policy changes to address them. Photo by Brian Howey / Public Press

City officials Thursday pledged to abandon the current complaint-driven approach to addressing homeless encampments, saying it has been ineffective in moving large numbers of people from the streets into services and stable housing.

Jeff Kositsky, director of the Department of Homelessness and Supportive Housing, said that beginning in mid-March, the Healthy Streets initiative — the multi-agency coalition tasked with abating homelessness — would stop relying mostly on calls from neighbors through the city’s 311 hotline.

In an interview, Kositsky said the city would shift its focus away from using police as first responders and toward social workers and specially trained paramedics who can connect homeless people with supportive services. He said that responding to every complaint — the way the system has worked for nearly two years — has been a drain on resources: “When they’re rushing around to close those calls, they’re not engaging people in an effective way.”

The announcement came at a quarterly presentation before the Local Homeless Coordinating Board, when Kositsky and Emily Cohen, the mayor’s policy advisor on homelessness, also said the Healthy Streets initiative would hire a manager for what has been a leaderless collaboration of city agencies, and create a community engagement group to participate in the initiative’s decision-making processes.

The proposal came as Cohen shared a raft of disappointing statistics. She said 2019 saw a decline in the number of homeless people accepting referrals for services and an increase in tents in public spaces citywide — an overall reversal of progress the prior year.

Perhaps the most discouraging figure was the percentage of unhoused people who reentered street life immediately after staying in a city shelter or navigation center: 95% in 2019, up from 58% the year before.

Cohen acknowledged the shortfalls of both the police and outreach workers in making connections between people in need of housing and service providers. Only 2% of police encounters resulted in these connections. The rate was 17% for encounters with the Homeless Outreach Team, a division of the Department of Homelessness and Supportive Housing.

Included in the presentation was the latest quarterly count of tents and lived-in vehicles, conducted on one day in January. The number of tents in San Francisco increased steadily throughout 2019, and jumped again last month to 649. That’s a 31% increase over January 2019, and the highest tally since the city began counting in mid-2018.

The number of lived-in vehicles was also at its highest yet, 814. That represents a 41% increase since the city’s first such counting in April 2019.

Kositsky has spoken out against the 311-driven system before. The complaint-driven model places strain on outreach workers who every day must respond to as many of the hundreds of daily encampment complaints as they can. “We bit off more than we could chew,” he said at Thursday’s presentation. “Now we’re going to go back to what we know works.”

Under the city’s current strategy overburdened social workers are forced to tell unhoused people, “I can help you or you can move,” he said. These ultimatums have bred distrust of city services among homeless people and have led to decreased engagement rates. This, he said, has increased the likelihood that after staying in a shelter unhoused people will choose to return to living on the street instead of seeking or accepting other city services.

“For someone who doesn’t trust the system,” Kositsky said, “it’s a logical thought process: ‘Why would I want to do that again?’”

Since August 2018, visits to homeless encampments by the Healthy Streets initiative have been driven almost entirely by citizen complaints to 311. Cohen said the primary barrier to Healthy Streets’s success was “inconsistent strategies.” Kositsky said that was a reference to how the initiative determines which encampments to visit.

He said in an interview before the presentation. “If following 311 calls worked, I would be fully supportive of that. I have problems with doing things that don’t work.” But he also said he anticipated backlash from neighbors: “I don’t want to be painted as, ‘I don’t care about housed people and their concerns.’”

Healthy Streets’s phase-out of its reliance on 311 calls, starting in March, will be replaced with a “slow roll” approach, Kositsky said. Instead of responding to each complaint, the city will return to its original method, a so-called zone model. It melds 311 data, outreach worker input and other metrics to identify homelessness hotspots, and prioritizes neighborhoods that have high concentrations of homeless encampments.

For its more than two years of existence, the Healthy Streets initiative has operated without a leader or official spokesperson. Kositsky said a new manager would be announced in mid-March along with other organizational changes.

Del Seymour, a nonprofit leader in the Tenderloin and co-chair of Local Homeless Coordinating Board, said he was “pleasantly surprised” at the prospect of a Healthy Streets manager. “We’ve never been able to say, ‘Who can we go to? Who’s in charge?’” he said. “Now we have an answer to that.”

A community engagement group will help bridge gaps between the initiative and neighbors, both housed and homeless. It will include representatives from nonprofit organizations, businesses, the tourism industry, neighborhood associations and the Coalition on Homelessness, Kositsky said.

Kositsky said that the goal of these changes is to have the city’s homelessness crisis under control by 2022, in which case it could dissolve Healthy Streets.

Kelley Cutler, an organizer at the Coalition on Homelessness and a member of the Local Homeless Coordinating Board, said she and activists had been pushing for these sorts of changes since Healthy Streets launched in January 2018, and that their concerns had been ignored until now. “I still see it as a complaint-driven system,” she said. “We’re still going in the wrong direction.”

Asked how she felt about the announcement, Cutler raised her eyebrows and said: “I hope that they do it. But I don’t think that they will.”