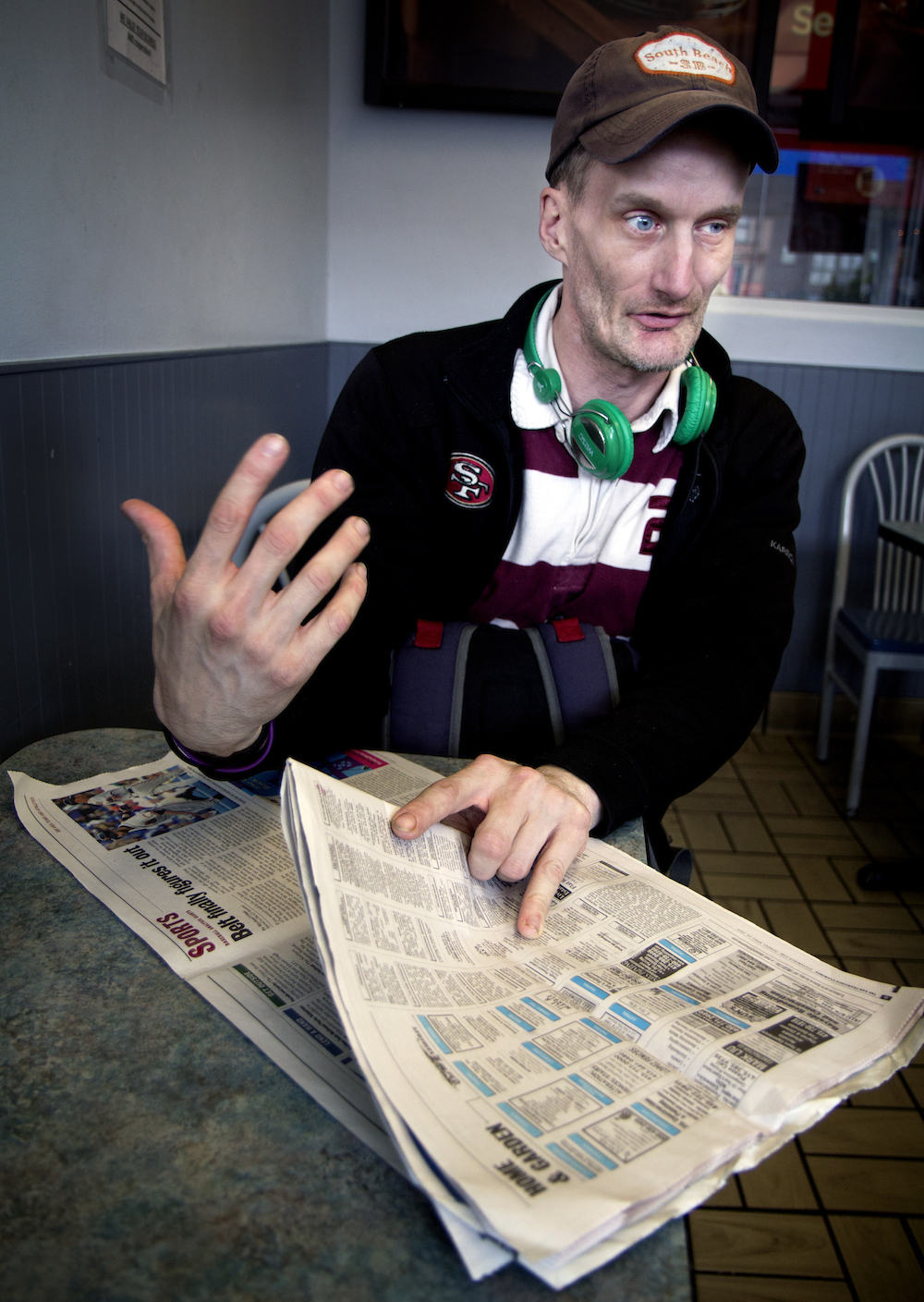 Don Benorden, 41, sifts through classifieds listings every week in search of available below-market-rate apartments. After eight years on the city’s waiting list to live in public housing, his name is finally near the top. But other applicants may have to keep waiting — Mayor Ed Lee’s housing plan will only add 250 new units to the city’s public housing stock during the next six years. The city will rehabilitate an additional 3,750 units for existing tenants. Photo by Tearsa Joy Hammock / San Francisco Public Press

In a speech so subtly phrased that it threw off the New York Times, CNN and several local news outlets, San Francisco Mayor Ed Lee seemed to promise early this year that the city would build at least 10,000 homes for poor and middle-class residents within six years.

But the mayor’s current housing forecast, which counts up planned construction projects, shows that barely 6,000 of these affordable homes would be new. The remainder, up to 40 percent of the total, would consist of rehabilitated public housing. While repairing those homes will benefit the low-income tenants who live in them, doing so would add little or no new housing.

The mayor’s housing staff readily supplied details about the projects that went into his housing plan. But they did not respond to subsequent requests for comment about how rehabilitated units would address the city’s crisis in affordable housing, as skyrocketing prices leave few options for those who cannot afford the market rate. Affordability is also a growing concern for middle-class residents, many of whom earn too much to qualify for low-income housing. Lee’s plan would add few new homes specifically for this income bracket, though market-rate housing in less expensive neighborhoods would likely fill that affordability gap, his staff said. Recent real estate trends, however, show that many such out-of-the-way neighborhoods have seen price spikes in recent years.

Lee has been under pressure to respond to public outrage brought on by rising real estate prices, which have priced out or led to the evictions of longtime residents. He said in his January State of the City address that, overall, 30,000 “new and rehabilitated” homes would come online by 2020, and that about 10,000 would be subsidized to be permanently affordable. Many news organizations oversimplified the message by excluding mention of rehabilitated units.

San Francisco is, by some measures, the nation’s most expensive city: The average rent now exceeds $2,500 for a studio apartment. The increase in prices has hit lower- and middle-class households the hardest. All this has pushed the shortage of affordable homes to the top of the city’s political agenda.

Under Lee’s plan, each year the city would add an average of just 782 new affordable homes. That is half of what the Association of Bay Area Governments estimates is necessary for residents who earn less than 80 percent of the median income.

If the city actually built every project now on the books, San Francisco would outpace current construction and make a “significant dent” in the need for affordable housing, said Peter Cohen, co-director of the San Francisco-based Council of Community Housing Organizations, a policy advocacy organization. But Cohen said the city lacked the funds to build it all, even after voters approved the landmark Housing Trust Fund in 2012. “We’re going to need more funding,” he said, “there’s no question about it.”

The confusion was likely a result of Lee’s self-contradictory January press release, titled “Mayor Lee Outlines Bold 2014 Agenda in State of the City Address.” The extended headline said Lee was “pledging 30,000 New Homes by 2020.” Six hundred words later came the explanation that some of those homes would be rehabilitated.

The city plans to rehabilitate 3,750 public housing apartments over the next six years, and build 250 new ones. This housing serves the city’s poorest residents, who pay just 30 percent of their income for rent. Those earning no more than $38,850, for a two-person household may apply.

Another stark fact emerges from the mayor’s housing plan: Middle-income residents can look forward to even fewer reliable housing options.

In the State of the City speech, the mayor said a large portion of this housing would target “working middle-income San Franciscans.”

But little of the planned housing would be priced specifically for San Francisco’s middle class. Most of the units would be priced at the going market rate, which has risen across the city in the last three to four years.

The Association of Bay Area Governments recommends that 19 percent of San Francisco’s new housing be made available to residents earning between 80 percent and 120 percent of the median income. That is also the level that city officials often refer to as inclusive of San Francisco’s middle class. But under Lee’s plan, only 3 percent of planned subsidized housing would target this income bracket.

City officials argue that there are other options for the middle class. In the next six years, thousands of new market-rate homes will be built in San Francisco’s least expensive neighborhoods, notably Bayview-Hunters Point and Visitacion Valley, where housing prices can be half as much as they are downtown, said Olson Lee, director of the Mayor’s Office of Housing.

New market-rate homes will become available at the massive Hunters Point Shipyard housing project as early as June. But who will be able to afford them? Neither the mayor’s office nor the developer, Lennar Corp., could say.

Developers of other market-rate projects planned at Parkmerced, Visitacion Valley and Treasure Island also declined to project how much those homes would cost as they go on sale in the next few years.

Even if they start out relatively inexpensive, these homes might not stay that way. Data from the real estate website Trulia show that depending on neighborhood, home prices have either plateaued or increased since the depth of the Great Recession in 2009. Even the neighborhoods farthest from downtown experienced market pressure. The median sales price for a home in the 94112 ZIP code, which largely overlaps with Visitacion Valley, rose by about $100,000. Prices rose even faster in Bayview-Hunters Point.

Tim Colen, executive director of the San Francisco-based Housing Action Coalition, said the best way for the city to fill its middle-class housing gap is to encourage market-rate construction in less expensive neighborhoods — especially major transit corridors in western neighborhoods such as Ingleside and the Sunset District: “We need to start looking farther, outside the downtown area.”

Overall, Colen said the city has long had a poor record of producing middle-class housing. “It’s a fantastic civic failure,” he said.