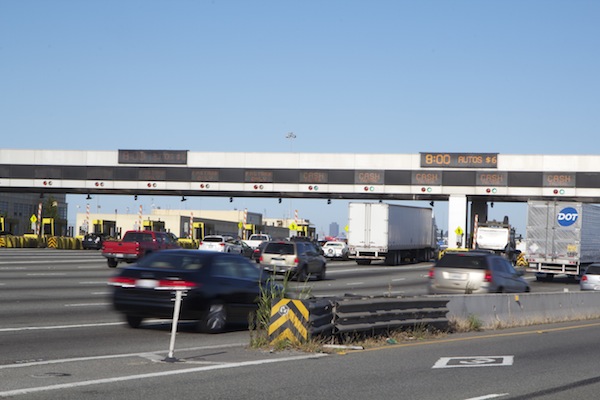 The cost of transportation includes the price of toll. Drivers entering the City via the San Francisco-Oakland Bay Bridge now pay a toll of $6 per vehicle during the peak hour of 8 a.m. Photo by Tearsa Joy Hammock / SF Public Press.

Spiking gas prices in recent years were likely a contributing factor to foreclosures in newly built outlying housing developments in the Bay Area, researchers say, suggesting that sprawl may be bad for the region’s economic stability.

Two recent studies found links between gas prices and foreclosure rates across California and other parts of the nation. The highest concentrations of Bay Area foreclosures were in eastern Contra Costa and parts of Solano and Sonoma counties. The areas with the lowest foreclosure rates were in the urban corridors of Oakland, San Francisco and parts of San Mateo and Santa Clara counties — areas most accessible by public transit.

An implication of the economic analyses, researchers said, is that one way to protect the Bay Area from future housing shocks would be to build more dense neighborhoods close to public transit.

As the cost of commuting first jumped to an average of $3.35 per gallon in 2008, suburban neighborhoods that for decades continued to sprawl across the region became less desirable. As the housing bubble collapsed, long commutes increased household expenses, causing more economic pain in the region’s fringes and more mortgage defaults.

A study published in February by University of California economists showed that in 2008, transportation costs were 23 percent higher in the 15 California cities with the most foreclosures. The high-foreclosure cities were on average 16 miles farther from a core city and had half as many public transit riders per capita.

For regional planners facing political opposition to the idea of “smart growth,” this research suggests that there is a compelling economic justification for what has been considered primarily an environmental movement. The idea is that prevention of air pollution, preservation of open space and avoidance of more infrastructures to service new developments can help avert future crises.

“I don’t think you can make the case that lack of transportation caused the foreclosure crisis,” said Scott Bernstein, president of the Chicago-based Center for Neighborhood Technology, which recently collaborated with Bay Area transit planners on a similar study. “But those with higher transportation costs were more likely to foreclose. Transportation ends up being a pretty good predictor of where it’s going to happen first.”

The economics of suburban life changed after gas prices spiked, Bernstein said. So homeowners had these two huge costs of living — housing and transportation. But they were counseled by real estate advisers as if both were fixed costs. That was a big problem, Bernstein said: “There isn’t a counseling program around that can help you with both costs going up.”

Building new developments that give residents transportation options — walking, biking, taking BART, Caltrain, Muni or AC Transit — might soften the next crash and help residents hold on to their homes, said Doug Johnson, a Bay Area native and senior planner focusing on smart growth for the Metropolitan Transportation Commission.

The University of California study, produced by the Center for Energy and Environmental Economics based at the Berkeley and Santa Barbara campuses, “How High Gas Prices Triggered the Housing Crisis,” further argues this concept:

While cheap fuel prices led to urban sprawl and the expansion of homeownership to low-income households that settled in the suburbs, dramatic increases in fuel prices disproportionately impacted suburban homeowners who suffered the greatest commute cost increases and home value declines. Mortgages became unaffordable for some households and imprudent for others, leading to unavoidable and strategic defaults.

The reasons behind foreclosures varied across the nation, said Daren Blomquist, vice president of RealtyTrac, a real estate website that monitors foreclosure data for consumers and businesses. Borrowers without good credit took out risky loans to buy homes they could not afford.

Subprime loans, offered to borrowers not qualifying for prime-rate loans, pushed the mortgage bust in Detroit, Chicago and other cities before spreading to the suburbs, he said. But in other areas, where the foreclosure problem started in the outlying areas and continues to be worst farther out from job centers, transportation cost may have tipped more homes into default.

“I think that’s a piece of what we’ve learned from all this,” Blomquist said. “You have to take into account the location of developments and realize that the farther people are away from jobs and other amenities, probably the more risky the developments are for foreclosure rates.”

RealtyTrac observed sharp contrasts in foreclosures among Northern California counties over recent years. Contra Costa County ranked the 13th highest foreclosure rate in the state: It peaked at 5.8 percent in 2009, falling to 4.1 percent in 2011.

The easternmost portions of the county, including Antioch, Brentwood and Oakley, were hit hardest.

More-urbanized Alameda County ranked 33rd, San Mateo ranked 51st and Marin ranked 52nd. San Joaquin County, within theoretical driving distance from Bay Area jobs, was on the other end of the scale. It ranked No. 1.

“The smart-growth movement has done a good job in getting people to ask the right questions,” Bernstein said. “It’s not just what you are building, it’s where you are building it. There should be universally affordable and accessible communities.”

But the term smart growth has become a dirty word to political conservatives and local control advocates, who say the urban planning movement hurts residents’ ability to live where they want to live. Tea party adherents and community activists have come out against a collaborative effort by the Association of Bay Area Governments and the Metropolitan Transportation Commission to create compact, transit-accessible communities to accommodate population growth.

The regional plan does not favor single-family homes, but rather mass transit and getting people out of their cars, said Heather Gass, a Danville real estate agent and East Bay tea party activist. She said limiting development to urban zones increases the cost of living, and residents will resist giving up their cars.

“If smart means we are crammed into housing next to mass transit while we still have our cars, what’s smart about that?” she said. “I don’t have anything against people living in high-density housing, but people who move to the suburbs move there because they want to get away from all of that. We shouldn’t all have one cookie-cutter solution.”

Johnson, the transit planner, said smart growth is about giving people choices, not trying to force everyone out of their cars or into places they do not want to live. And, although change can be scary, the region will continue to grow and attract people from elsewhere.

“We have an expanding population and we need to think about places where we can put people,” he said. “So I don’t think ‘smart growth’ or ‘dumb growth.’ I think about looking for growth that allows people to have travel choices and live convenient lives.”