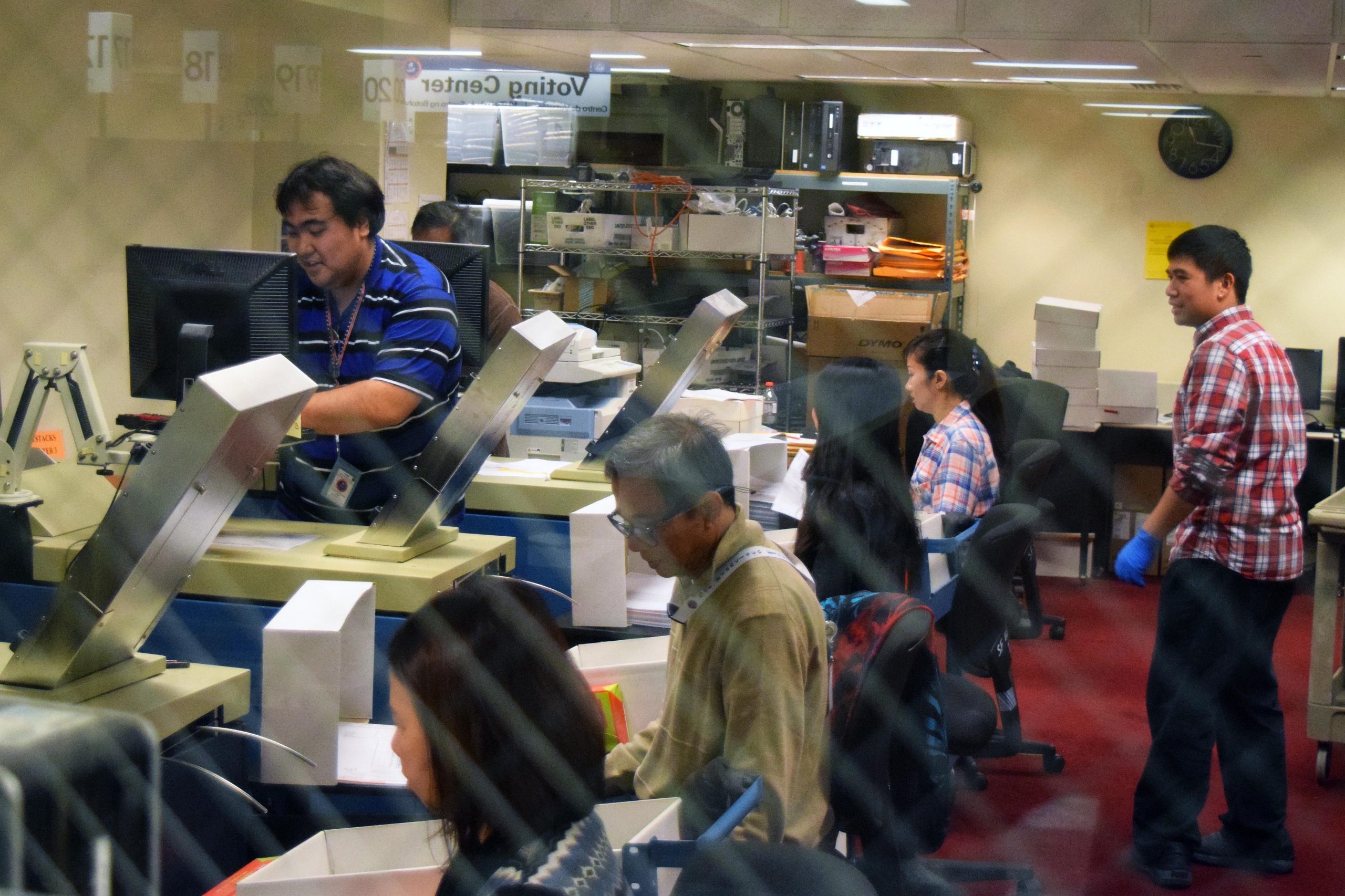 Staff at the San Francisco Department of Elections continue to count votes, with the goal of finishing before Thanksgiving Day. Photo by Zachary Clark / San Francisco Public Press

But as ballots continue to be tallied, the number of voters has hit a historic high.

The milestone was reached over the weekend, the Department of Elections reported. As of Sunday, 396,891 residents had cast ballots, or about 77 percent of San Francisco’s registered voters.

Statewide turnout is running about 65 percent. Nationally, unofficial projections place it around 58 percent.

The previous San Francisco record was set in 2008, when 388,112 city residents cast votes to help elect Barack Obama. Because the number of registered voters was smaller that year, turnout was 81 percent. As a percentage of registered voters, the city’s modern high-water mark stands at 86 percent, which was set when 348,000 people cast ballots in the 1960 presidential race between John F. Kennedy and Richard Nixon.

“There was an incredible amount of interest in this election,” said Jill Fox, the department’s outreach manager.

Elise Pennington, who has lived in San Francisco for three years, said she was not surprised by the voter turnout. “A lot of people didn’t want Trump in office,” she said, “and there was a female nominee.” Despite not regularly voting in the past, she voted this year.

The city voted overwhelmingly to elect Hillary Clinton to the presidency, casting 330,693 votes, or about 84 percent of all votes cast, in her favor. About 9 percent went to President-elect Donald Trump.

Fox and some of the department’s other 285 permanent and temporary staff have worked every day since Halloween, first to register voters, then to count ballots.

“Oh, we’re pretty much running on sugar and caffeine at this point,”  she said.

Their goal is to finish in time for everyone to take Thanksgiving Day off, and that is looking likely.

“We’re all seeing the light at the end of the tunnel,” Fox said.

By Sunday evening, about 18,000 local ballots still needed to be counted. As the Public Press reported Friday, it is impossible to predict how those will affect specific proposition and candidate races, because not all voters weighed in on all races.

But in many races the outcomes are clear, because the gaps between “yes” and “no” votes have widened beyond the number of outstanding ballots.

On Monday, the halls surrounding the Department of Elections were packed with workers counting ballots and “remaking” the ones that possessed imperfections so that they could be tallied. Ballot Distribution Manager Cuong Quach said the department’s staff had nearly doubled since the last election.

Louis Mascarenhas has been a seasonal worker with the Department of Elections for more than 10 years. “I love this job,” he said. “It’s challenging, it’s so much fun and there’s a lot of excitement in the air.”

Fox said the department stepped up voter outreach this year in light of San Francisco’s growing population. It passed out more than 100 kits, demonstrating how to register people to vote, to high school student groups, churches, temples, nonprofits organizations, neighborhood groups, fraternities and sororities. The department also hosted its own events for registering voters, and produced other materials like an explanatory video on ranked-choice voting.

The department must report all presidential votes by Dec. 6 to the California Secretary of State, and post final results no later than Dec. 8.

The Secretary of State will certify all election results by Dec. 16.

An earlier version of the chart stated that Proposition S was a “clear win.” It has since been corrected.