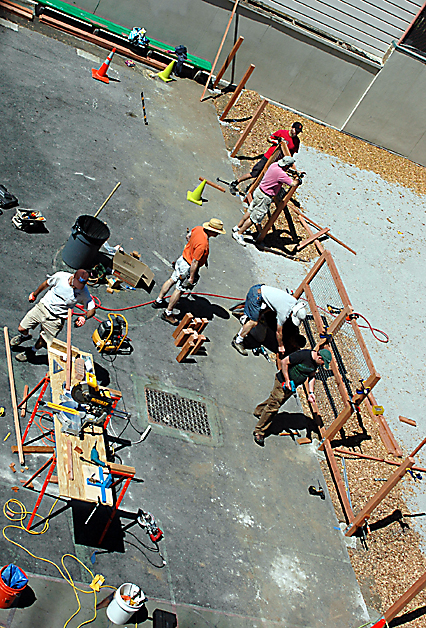 Some school improvement projects would be paid for through a parcel tax that Proposition A seeks to extend. Photo by Monica Jensen/SF Public Press.

A 20-year-old parcel tax to fund capital improvement projects for the San Francisco Unified School District is set to expire this year — but not if Proposition A can help it.

Proposition A is on the ballot for Tuesday’s general election with six other propositions. It will extend a special tax originally approved by voters in 1990 while modifying it to allow for inflation adjustments.

The tax was originally used to support school retrofit and maintenance projects after the 1989 Loma Prieta earthquake.

According to a statement by City Controller Ben Rosenfield, the tax would add $6.8 million to the coffers of the school district its first year and up to $16 million in future years.

The proposed adjustment for inflation could not exceed 2 percent annually. Meanwhile, funds would only be available for capital improvements but not for debt service.

Proponents of the proposition include Mayor Gavin Newsom, the San Francisco League of Young Voters and Parents for Public Schools of San Francisco. In a letter included in the 2010voting guide signed by various supporters including Newsom and Fire Chief Joanne Hayes-White, advocates stressed the importance of the extra funding and the fact that the proposal was not a tax increase.

“Prop A makes sure our children and teachers don’t suffer even greater cuts at the expense of mandatory earthquake and fire safety work,” the letter said.

Meanwhile, there has been little public opposition to the measure, although the San Francisco Republican Party, Doo Sup Park, a Republican candidate for state Senate and Terrance Faulkner, chairman of Citizens Against Tax Waste, all came out against the measure. In a letter included in the 2010voting guide, opponents argued that the proposition should not be passed until local schools were improved.

“The San Francisco Unified School District has ‘dumbed down’ education,” the letter said.

The measure would extend the basic premise of 1990’s Proposition B, which was passed to create funding to help with school maintenance and retrofitting after the 1989 Loma Prieta Earthquake. The measure allowed San Francisco to create a Mello-Roos parcel tax that would provide a then-estimated $5.6 to $8 million a year to the school district.

The tax was $32.20 annually on any commercial or single-family property while levying a tax of $16.10 for every unit in multi-family residential property.

The Mello-Roos Community Facilities Act of 1982 enacted as a way of potentially providing government funding to large projects, such as school and infrastructure projects, after Proposition 13 was passed in 1978.

Theresa is a graduate of San Francisco State University with a B.A. in journalism and women and gender studies. She has done reporting in southern California, Denmark, Estonia and Belgium.