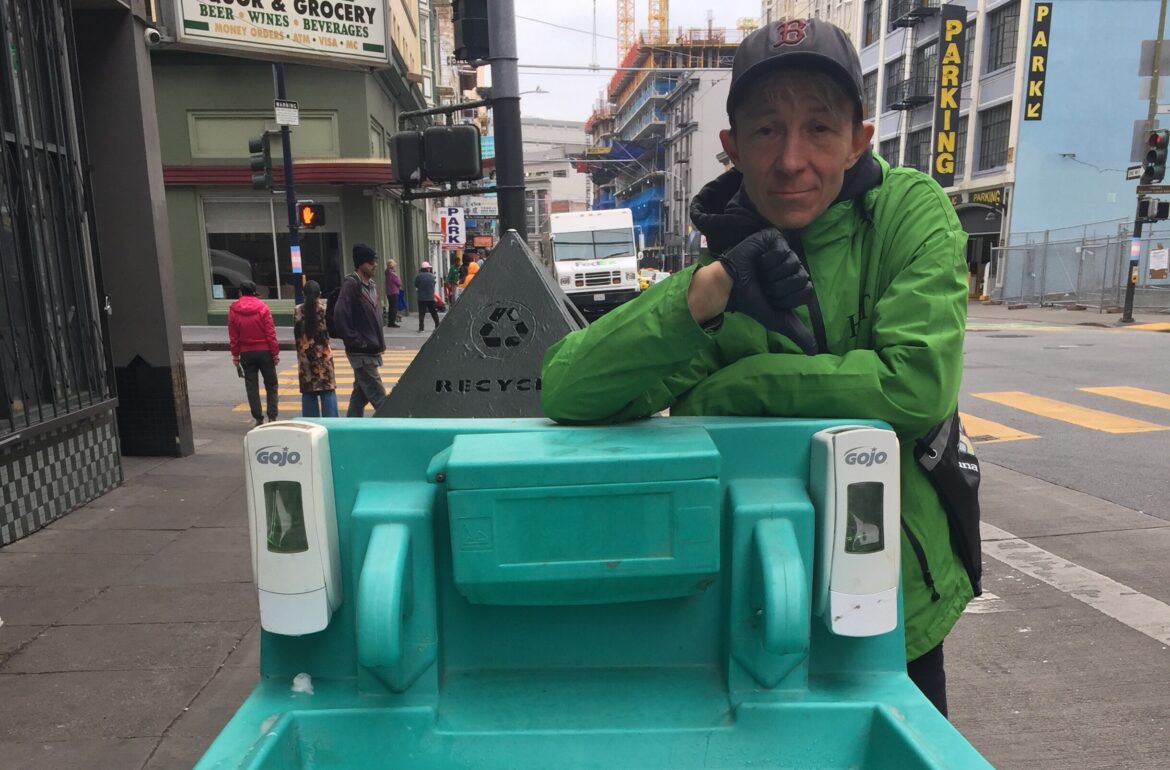 Courtesy of the Department of Homelessness and Supportive Housing

A Homeless Outreach Team worker inspects a handwashing station and finds that it needs to be refilled in the summer of 2020, at a time when coronavirus health and safety guidelines emphasized hygiene, not masks, as the best method to contain the spread of COVID-19.

Members of San Francisco’s Homeless Outreach Team — also known as the “HOT team” — walk neighborhood beats to offer support, information and referrals to services to people living on the streets. During the pandemic the resources available, particularly shelters, changed significantly. Congregate shelter populations were reduced, then shelters were closed, then they reopened. The city made hotel rooms available to some medically vulnerable homeless people. Meanwhile, federal and local guidelines for containing the spread of the coronavirus were also changing. Mark Mazza, outreach manager for the Department of Homelessness and Supportive Housing, talked with “Civic” about how those changes influenced the outreach team’s work.

At the time when shelters had to reduce their occupancy to meet social distancing guidelines, Mazza said, a lot of people were still out on the streets and outreach workers had very little to offer them. In fact, even basic supplies like hand sanitizer were affected by shortages, which left workers walking their beats with nothing to give but a squirt of sanitizer and a water bottle.

“So as you can imagine, it was pretty frustrating for our staff who were used to going out and helping people into shelter, helping them towards permanent supportive housing, or any type of exit from homelessness right now,” Mazza said. “Not only was it frustrating for them, but their clients on the street. They were just like, ‘really? This is what you got for me?’”

Then, in mid-April 2020, the shelter-in-place hotel program began accepting placements.

“It was tough, for a lot of reasons,” Mazza said. “There was no real process to follow. So we just had to figure out as we went. And at that time, what we were doing was essentially talking to everybody that we thought maybe eligible for a hotel room, which was almost everybody we knew on the street.”

Only homeless people over age 60 or with underlying conditions were accepted into the shelter hotel program. Since someone’s health conditions may not be evident by looking at them, the outreach team worked with the city’s Department of Public Health to identify people who would likely be eligible for the program for outreach workers to offer a room to. That also meant turning down those who didn’t qualify.

“These are the people that they talk to every day, and to go and let them know, ‘hey, I know that you’re on the street and I know that you’re scared, but you’re just not sick enough to go into a hotel room, so I’m going to keep walking down the block and look for the people who are eligible,’” Mazza said, was troubling for workers. “Our staff are people who, they came to this work because they want to be helpful. And it’s really hard to let people down, over and over and over.”

The team has also shrunk since the pandemic began affecting San Francisco, Mazza said. Most of the workers, some 66 people, are employed by a nonprofit, Heluna Health, and about eight are employed by the city’s Department of Homelessness and Supportive Housing. Before the pandemic, the outreach team had an additional 25 members. Some nonprofit workers get offers to work for the city, which can offer appealing stability.

“There’s a history of struggling with retention for that reason,” he said.

But others, Mazza said, are simply tired of disappointing the people they are charged with serving.

“We’ve lost people for both reasons,” he said. “There’s some people that are just stressed out, frustrated by the lack of being able to help as much as they would like. There’s so much need on the street and such a limited number of resources. That’s a difficult reality to walk into every day.”