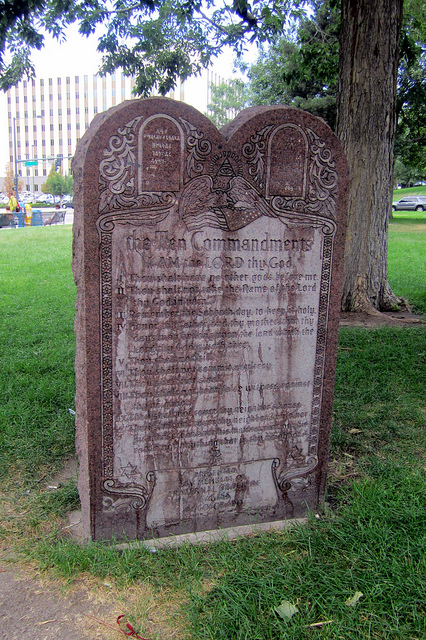 The Fraternal Order of Eagles has provided as many as 10,000 Ten Commandments monuments for public amenities in the last five decades. Denver’s Lincoln Park monument was installed in 1956. Creative Commons image by Flickr user Wally Gobetz.

After hearing complaints about the Ten Commandments monument in the publicly owned Oakland Zoo, the president of the zoo, Joel Parrot, denied ownership of the monument and had it removed Wednesday.

Though a bit delayed — Atheist Advocates of San Francisco dated the first complaint to 2008 — the zoo’s action came just before a scheduled protest on Sunday by a group of Bay Area atheist organizations.

The six-foot-tall plaque stood by the Snow building, typically used for special events. It was placed there in 1966 by the Fraternal Order of Eagles, a nonprofit organization composed of “people helping people.”

According to the organization’s website, it has distributed more than 10,000 Ten Commandments monoliths in public spaces since 1954 and has fought to keep them in place. Since then, several monuments have become the subject of legal debates regarding the separation of church and state, but none given by the Eagles has been removed after being deemed unconstitutional.

Though Parrot claims zoo officials had considered removing the plaque for years, they still maintained the monument’s constitutionality and said it was only removed now to make the zoo a more welcoming place.