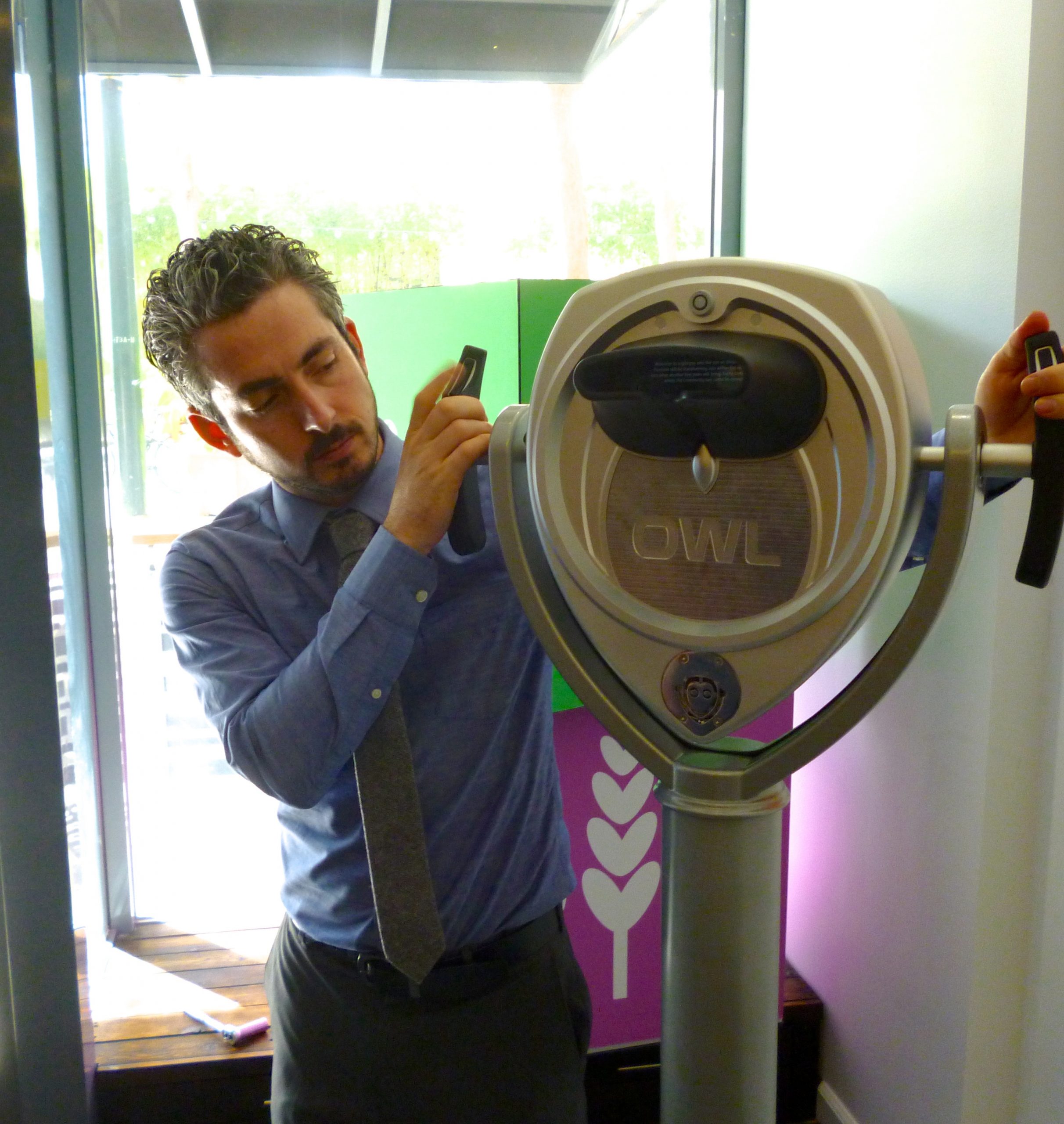 A San Francisco technology company is helping Bay Area residents visualize in 3-D how their neighborhoods could look under three feet of water when sea-level rise accelerates later this century.

The company’s virtual reality device is cleverly encased inside a viewfinder similar to the old-style coin-operated contraptions found at historical landmarks and national parks. But the Owl, as the machine is called, does not contain binoculars. It can show on its high-resolution screen what a landscape looked like a century ago, or decades in the future.

This year it is partnering with the Federal Emergency Management Agency and environmental science researchers to show coastal residents in Marin County how climate change could change the landscape on the shoreline and inundate parks, roads and residential areas.

“The user is really getting as realistic view of the future as possible,” said Aaron Selverston, founder and CEO of Owlized, the company that started by creating visualizations of future developments for builders trying to sell real estate.

Several organizations, such as Climate Central, an independent organization of climate scientists and journalists, have published online maps that show how rising seas could alter coastlines. FEMA, the U.S. Geological Survey and the National Oceanic and Atmospheric Administration offer similar online tools.

But Owlized takes this data-driven approach a step further by immersing viewers in three-dimensional renderings, embedded at a physical installation that is site specific.

The company previewed its battery-powered, six-foot-tall machine at the 2013 South by Southwest technology and economics conference in Austin, Texas. Owlized’s business model is based on offering real estate developers the device at $40,000 apiece to show local regulators, neighbors and consumers what proposed projects would look like upon completion. The Owl also rents for $1,000 a week.

In the East Bay city of Fremont, Owlized showed residents how a parking lot would give way to a park after a development plan under consideration, complete with a shopping mall and a revitalized Capital Avenue. In San Francisco, the company created images of the Better Market Street project, which is redesigning the city’s central thoroughfare from the Embarcadero to Octavia Boulevard as a cultural, civic and commercial center.

In promotional web videos, Owlized shows residents fawning over the installation. “When I first looked through the Owl, I was actually super surprised at how powerful it was to me,” said Kelli Rudnick, assistant project manager on the Better Market Street plan. During the project’s street-side presentation, passers-by used the device to view it “in a way they couldn’t get through a 2-D drawing,” Rudnick said.

Now the company is working to visualize sea-level rise in Marin, aided by a $150,000 grant from the FEMA, using data from other federal government sources.

The past year was the warmest on record, according to the National Oceanic and Atmospheric Administration. What does that mean? Warming oceans are melting the polar ice caps and glaciers, and warming water expands as it heats. Some scientific models predict that this could cause sea levels to rise of 16 inches by 2050, though there is robust debate about the timing of such an increase.

People living along the East Coast have recently witnessed dramatic consequences of climate change.  Miami often faces flooding. Hurricane Katrina on the Gulf Coast, and Sandy on the East Coast, raised the level of awareness of the danger of weather-related changes in sea level. But in the minds of West Coast residents, “it’s still not a big deal,” said Frank Niepold, climate education coordinator for the National Oceanic and Atmospheric Administration in Silver Spring, Md.

The Owl could help scientists make climate change more concrete for the public. “The three-foot rise concept is hard to get into people’s minds,” said Zachary Wasserman, chair of the San Francisco Bay Conservation and Development Commission, at a planning conference in Foster City last June. “But we need to get them to start thinking about how to deal with this problem.”

“We want to observe, visualize and see the public perceptions and their willingness to take action,” said Susanne Moser, a social science and environmental researcher at Stanford University who is working with the company by collecting data from users. She plans to deploy graduate students to observe how the device is used in the field. The Owl also has a built-in tool to survey user about their views on climate change. This information will be uploaded to the company’s computers via a cellular data connection, Selverston said at a presentation at SPUR in San Jose in mid-October.

But if 3-D visualization seems to be a compelling tool to make people aware of environmental change, this solution is limited.

The Owl “is an important thing, but not sufficient,” Moser said. When discussing the environment, she added, “people become overwhelmed and depressed.”

Selverston said that in order to adapt to sea-level rise, governments need to see the problem clearly to establish forward-looking policies. But so far, he said, most local governments are not prepared for sea-level rise.

At a minimum, Selverston said, the virtual reality view of the sea level rising by three to six feet — and higher during extreme high tides known as king tides — would be educational and help voters and public officials set policies on land use. “We don’t necessarily want to scare everybody,” he said, “but we do want to do a service to the community.”