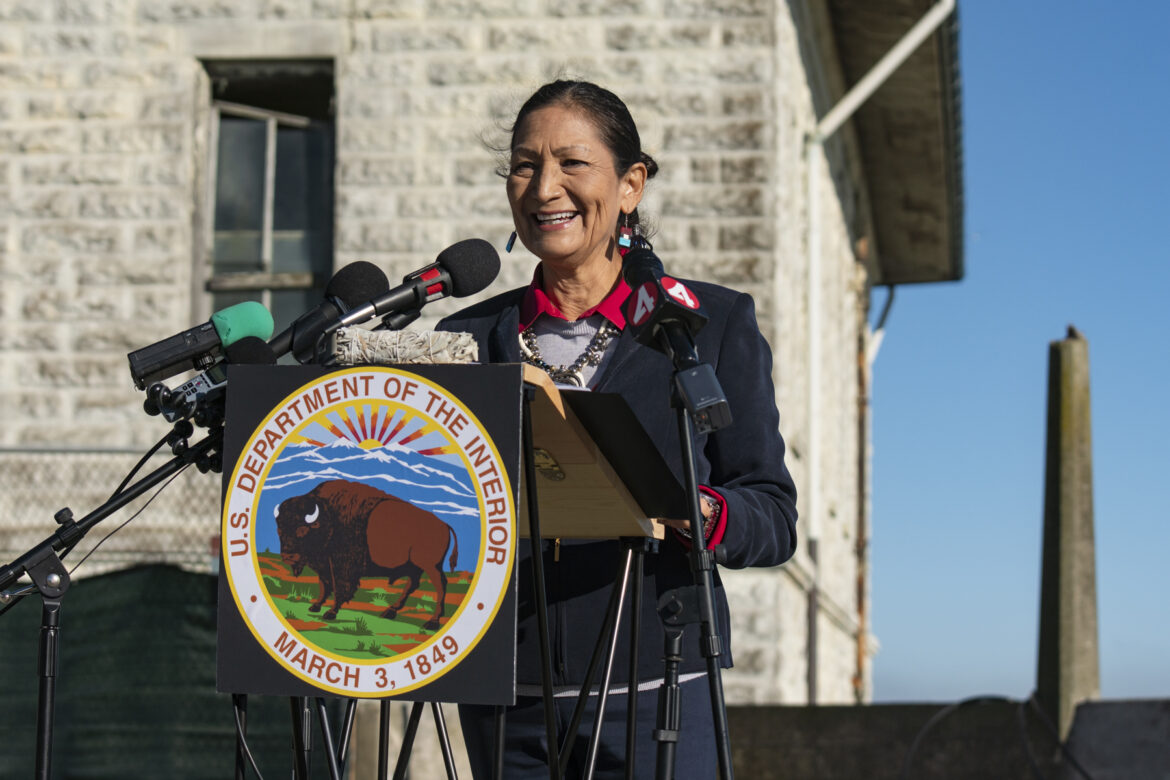 Secretary of the interior Deb Haaland commemorated the 52nd anniversary of the occupation of Alcatraz on the island on Nov. 20, 2021.

More than half a century after they occupied the island in a monthslong protest for indigenous sovereignty, Native American activists gathered on Alcatraz on Saturday to watch the nation’s first indigenous secretary of the interior commemorate the occasion.

“The occupation of Alcatraz Island by indigenous people in 1969 was more than a call for action. It was a cry for a sense of community and the life ways that were stolen from us,” said Interior secretary Deb Haaland. “Alcatraz was born out of desperation. Out of this we gained a sense of community and visibility in the eyes of the federal government. But more than that, our indigenous identities were somehow restored.”

Eighty indigenous activists landed on Alcatraz on Nov. 20, 1969, exercising a right established in the Fort Laramie Treaty of 1868, which said unused federal lands could be claimed by Native Americans. Their arrival marked the beginning of what would become a 19-month occupation that would spark a national movement for indigenous rights, the Red Power movement.

The events leading up to the occupation were a continuation of centuries of racist, violently oppressive policies targeting Native American people. In 1953, Congress passed the Termination Policy, ending federal recognition of many tribes and calling for their lands to be sold. In 1956, the Relocation Act encouraged Native Americans to relocate to cities to find work.

Over the course of the Alcatraz occupation, hundreds of people gathered under the name Indians of All Tribes and established kitchens, a medical clinic, a school and even a radio station. But they also suffered losses. Occupation leader Richard Oakes and his wife left the island after their 13-year-old daughter died after falling from a stairwell. The U.S. government cut off power and access to a barge supplying water. Later, fires destroyed several buildings.

“Many people romanticize the occupation of Alcatraz. But we cannot overlook the hardships that families endured over those two years,” Haaland said. “But because of the sacrifices that were made in this place, we no longer have to act out of desperation. The fact that I’m standing here today is a testament to that fact. I am here, we are here. And we’re not going anywhere. We’re in a new era.”

Haaland outlined several new policies the Biden administration has advanced. These include protections for Bears Ears National Monument in Utah, and for Chaco Canyon and surrounding lands in New Mexico. The interior department and 16 other federal agencies have also committed to protecting tribal treaty rights in their work. The recently approved infrastructure bill will invest billions of dollars into replacing old infrastructure, adding climate adaptations and funding relocation from climate-change threatened areas in indigenous communities, she said.

Among those listening to Haaland’s remarks was LaNada War Jack, an Alcatraz occupier. The secretary had met with her and other organizers briefly before the official event.

“It was a tremendous honor for us. And we were really happy that she came,” War Jack said.

The audience for the secretary’s remarks was limited to a small group of indigenous organizers and members of the press, but activists continued the commemoration throughout the day in the New Industries Building. In addition to remembering the occupation and acknowledging its legacy, speakers underscored ongoing activism.

Jessica James, War Jack’s daughter, presented a plan for a cultural center and museum on Alcatraz for which Indians of All Tribes is pursuing funding. The proposal is adapted from a version developed by War Jack more than 50 years ago. James said more people should know about the occupation and its significance.

“It was really awesome to read about the occupation in history books, but you really don’t learn it until you’re taking an American Indian Studies class or something like that,” James said. “I think that we need to continue educating our people and the public about the occupation. And that’s what I think is so crucial about having a cultural center and museum here on the island, to provide that education for people.”

Morning Star Gali, a member of the Ajumawi band of the Pit River Tribe and California Tribal and Community Liaison with the International Indian Treaty Council, said her tribe had recently succeeded in two efforts to reclaim its ancestral land. Organizers defeated a wind farm project that Gali said was threatening an environmentally and culturally important site on their lands. PG&E recently returned 786 acres that were originally purchased by Mount Shasta Power in the early 1900s in a deal that tribal members described as deceitful and coercive. Some 5,000 acres will return to the tribe, Gali said, which she described as progress but not enough.

“All PG&E and publicly managed lands within our 100-square-mile territory need to be returned to the Pit River tribe,” Gali said. “The protection of our sacred lands, our waterways, cannot effectively happen without tribal management and stewardship.”

On Thursday, thousands of people will gather on the island before dawn in the annual Sunrise Ceremony, further commemorating the occupation by greeting the day with prayers and song.