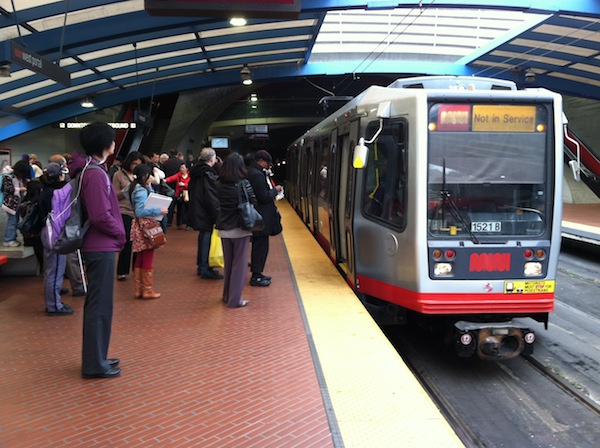 Muni riders often experience delays when vehicles fall out of schedule. At West Portal Station, riders shuffle out of a streetcar when train operators “switch back” on the opposite track to make up for lost time. Photo by Jason Winshell/SF Public Press

The poor on-time performance of San Francisco’s public transit, which the city started reporting accurately over the summer, is officially a trend.

Muni vehicles were on time 58 percent in September, up a little more than one percent from the previous month. But it was more than 10 percentage points lower than the numbers the agency regularly reported last year using what it said was flawed methodology.

The new figures, released Wednesday, fall far short of the voter-mandated goal of 85 percent. Muni has never met the goal, set in 1999 through the passage of Proposition E.

The last inflated figure, published at the end of last year, was 71 percent. Using a more accurate count, it was adjusted to 61 percent.

The transit agency is making some headway in dealing with its old buses and operator shortage. The Public Press reported last month that Muni is purchasing 45 low-floor hybrid-diesel buses and upgrading 80 biodiesel buses. Those new buses though won’’ be arriving until next year.

Rose said the transit agency is putting in more resources in training operators to get them out on the streets as soon as possible. The agency reports that 19 new part-time drivers began work last month with an additional 24 drivers in training.

Muni has also focused on reducing the number of transit trips that encounter bunching of vehicles and gaps in service on the most heavily used bus and train routes.