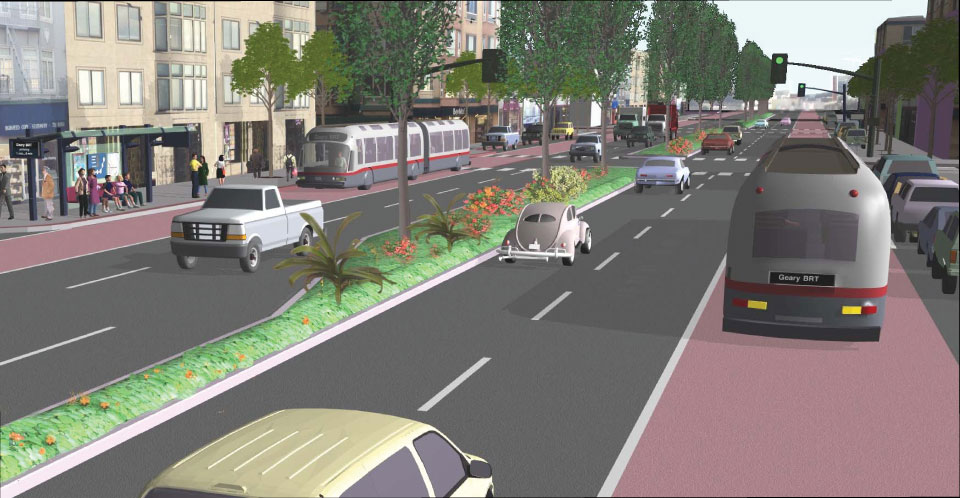 A rendering of the Geary bus rapid transit lane, in which buses are expected to travel 40 percent faster than current buses. The city began planning in 2003, completion expected in 2016. Image courtesy of the SF Municipal Transportation Agency.

San Francisco transit planners say a recipe of small fixes could amount to big changes in the nation’s fifth-largest urban transit system. But without new sources of money, many of these ideas, some of which would change the way the city’s streets are configured, will remain on the drawing board.

The system is chronically slow and crowded in part because its diverse fleet of bus and rail lines operates on a rollercoaster terrain in a fully built-out urban grid. Street fairs and demonstrations, ball games and construction routinely clog major arteries, making schedules seem academic.

The Municipal Transportation Agency launched its Transit Effectiveness Project in 2006, to reconfigure the city’s streets and tunnels — where physical constraints notoriously slow basic public transit to what one Muni planner called “a nightmare.”

Muni says it needs at least $173 million over the next 10 years for planning, design and construction of new infrastructure. Officials say the overhaul should speed up service and improve reliability. But with a $16.9 million budget shortfall this year and budget deficits predicted for the next 20 years, it’s hard to see when even one proposal might be rolled out.

“There’s a lot of things that can be done,” said San Francisco State University’s Jason Henderson, an associate professor of geography specializing in land use and transportation. “All of them by themselves seem mundane and small, but in the aggregate the cumulative result could be a first-class transit system.”

Here is a list of ideas — some from the Municipal Transportation Agency and some from experts who study public transportation in San Francisco — that could speed Muni, improve on-time performance and promote the city’s “transit-first” policy to get more residents out of their cars.

Another idea transit experts said could speed Muni is “queue jumping,” which would signal traffic to hold back a few seconds and allow buses to pull out first — similar to the metering lights on the Bay Bridge.

Muni would run faster and be on time more often if a prepaid proof-of-payment system were implemented. All-door boarding along with prepayment would allow everyone to step on and off the bus at once. Passengers wouldn’t have to wait in line or scramble for change at the front door.

Although the Clipper card is laying the groundwork for a proof-of-payment system across the Bay Area, it doesn’t speed Muni above ground because passengers are still required to enter through the front.

Muni officials say it’s presently too expensive to implement all-door boarding because it would require more fare inspectors. Muni now checks fare payments of about 2 percent of riders each day. That would have to go up to 5 to 10 percent to be an effective deterrent to fare evaders.

Muni planners concede that reducing the number of stops is the most controversial idea. Consolidating bus stops along major corridors such as Mission Street, Geary Boulevard and the N-Judah light-rail line could shave as much as seven to 10 minutes off of average travel times.

Over the next six to nine months, Muni is studying which routes might be good candidates for eliminating stops.

Some Muni routes cross the entire city — either north to south or west to east. One, the 28-19th Avenue bus, goes from Daly City to the Marina. The N-Judah goes from Ocean Beach to the Caltrain station at Fourth and King streets. The longer the route, the more difficult it is to stay on time.

Haley said the Metropolitan Transportation Agency is studying shortening routes on lines that are too long. Some examples include the 29-Sunset, 28-19th Avenue, 14-Mission, 30-Stockton and 71-Haight Noriega.

“Here, there’s heavy ridership,” Haley said. “Muni operates both bus and rail in mixed traffic. You have a lot of stops and long routes.”

The saga of the potential bus rapid transit lane along the Geary corridor began in 2003. It is still creeping through environmental and engineering reviews. The idea is to combine many of the time-saving physical changes to bus lines to make them look and act more like light-rail vehicles. Studies show that in some cities, bus rapid transit is as much as 40 percent faster than typical buses.

Components of the system could include raised bus platforms with new stops, traffic preemption and large, enclosed bus shelters, and it would replace an entire traffic lane on Geary. Business owners and neighbors who want to preserve parking spaces said they feared that removing a car lane would hurt commerce.

Muni officials said service could start in 2015 and later be repeated in other parts of the city. Van Ness Avenue is another potential bus rapid transit corridor.

Haley said another approach might be creating express “super-bus” lines. One Muni study explores the idea of running a bus on nearly the same route as the N-Judah light-rail line, with limited stops, all above ground, during rush hour. It would wind from Ocean Beach to Montgomery and Market streets in less than 30 minutes.

WHY IT MATTERS: SPEED

The Transit Riders Union is pressuring Muni to make changes many of these changes to the city’s streetscape. At a minimum, Snyder said, if one or two are implemented, Muni’s average speed could increase to 9 mph from the current 8.1 mph.

The real problems are political, Henderson suggested. Changes to the streetscape involve compromises that not everyone wants to make. “That involves looking at debates about parking, debates about bicycling and how to allocate street space,” he said.

Muni planners are using Market Street as a sort of test for the Transit Effectiveness Project, and for the city’s transit-first policy.

In one experiment, cars are forced to turn right at Eighth and 10th streets to make more room for buses and trains. On Market between Eighth and 12th streets, bike lanes weave in and out of car lanes, promoting nonmotorized commutes.

Haley said Muni plans to implement similar changes throughout the city, but his options are stymied by perennial budget cuts.

On a recent day from his seventh-floor office at the Municipal Transportation Agency headquarters, Haley surveyed the scene on Market Street and Van Ness Avenue, where some of Muni’s most heavily traveled routes converge.

Even non-Muni-related incidents such as fires and police actions can bring buses to a standstill. Muni’s fleet of electric trolley buses, light rail vehicles, diesel buses, cable cars and historic streetcars are all connected. In the underground, if one train is delayed, it backs all of them up.

“You’d be surprised what I see out these windows,” he said. “If you have a problem on one part of the system, it delays the whole thing."