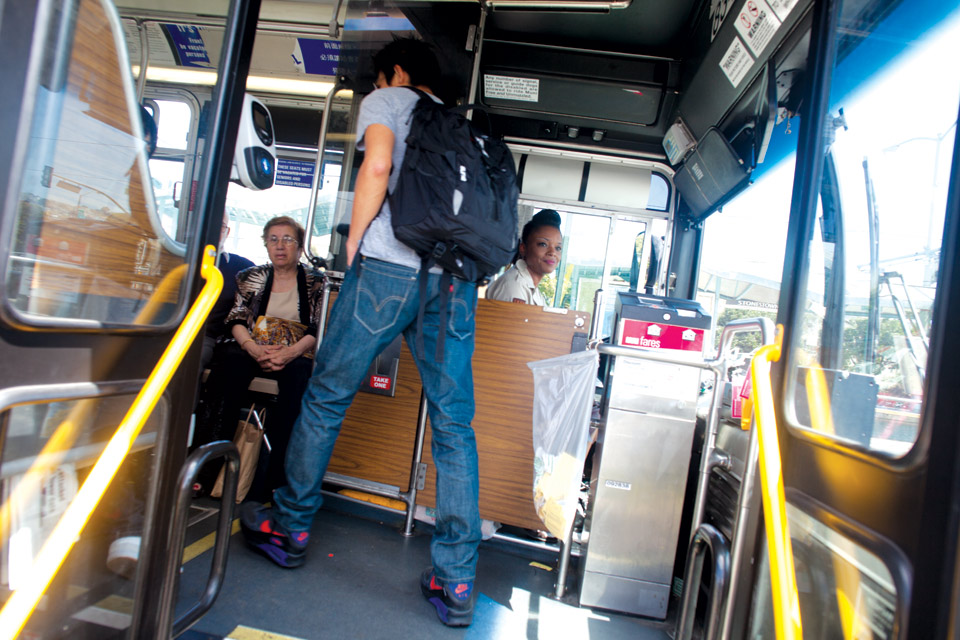 Muni drivers have been the focus of rider frustrations, which prompted voters to pass Proposition G on Nov. 2. Photo by Monica Jensen/SF Public Press.

Proposition G, the initiative that voters overwhelmingly approved to change pay and work rules for Muni operators, focused attention on the system’s drivers, painting them as a reason that San Francisco’s Muni transit system is notoriously slow and unreliable.

And the drivers did little to help their cause on the public relations front — rejecting cuts that other city workers agreed to, boycotting the annual Cable Car Bell Ringing Contest and threatening to strike if the measure passed.

But on the job, drivers work in a high-stress environment, with long hours and, for many drivers, few breaks.

“We are on the front line,” said Emmanuel Andreas, 47, a Muni driver for 11 years who drives the 33-Stanyan bus. “Whatever happens with Muni, the drivers feel squeezed between the management and the union and the public.”

In addition, the problems they contend with — faulty equipment and daily changes in traffic conditions that interfere with their ability to ensure on-time performance — are largely out of their hands.

On a recent day on the 28-19th Avenue line, the driver was running late because of construction on 19th Avenue. By the time the bus arrived at the end of the line at Fort Mason, the driver had only a few minutes to stretch her legs before she had to re-board the bus to head to Daly City BART.

It was not nearly enough time to eat lunch (which, if she did while inside the bus, would be one of a slew of rule violations), and not enough time to go to the bathroom without risking beginning her route already late. When the bus rolled into Daly City BART, the driver immediately picked up the waiting passengers and was again back on her route with no break.

Adding to the stress is the punishment that drivers who get behind schedule face. Myron Fong, a supervisor with 20 years’ experience driving a bus in his 30 years with Muni, said drivers who are late on their runs get a warning each time. After three warnings, “the driver would go to retraining.”

Fong said drivers also face stiff penalties for uniform violations. “The first one could be a warning. The second one could be a suspension day without pay,” he said.

That stress takes a toll on the health of drivers. A series of studies in the late 1990s uncovered high instances of high blood pressure, diabetes and other stress-related diseases among transit operators.