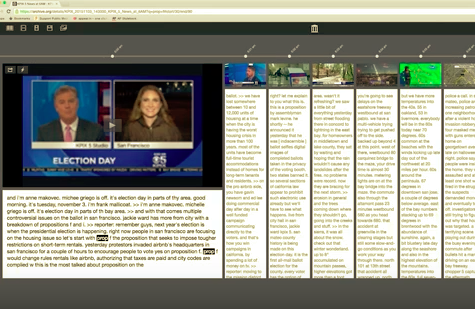 A screenshot from a sample search Roger Macdonald, director of television projects at the Internet Archive, conducted for the San Francisco Public Press, showing how TV News Archive content can be searched via keywords in TV news closed captioning.

The San Francisco Public Press recently sat down with Roger Macdonald, the director of television projects at the San Francisco-based nonprofit Internet Archive.

Macdonald demonstrated how people can use the organization’s TV News Archive to find topic-specific news coverage on broadcast television.

The archive records 36 TV channels, from the major local stations in the Bay Area, Philadelphia and Washington, D.C. The project has compiled more than 1 million clips since 2009.

How to search for news segments using the TV Archive

Users can search the closed captions in TV news for keywords, and they can filter the resulting news segments by the dates they ran or the networks that aired them.

Any news segment can be shared by email or on social media, and users can precisely trim the start and stop times of their videos.

The TV Archive records metadata associated with its video clips, and some journalists and researchers have done interesting things with this data. Data scientist Kalev Leetaru created an animated map of the world that illustrated news stations’ editorial choices. On it, a location twinkles every time it is mentioned in the 500,000 hours of television that the archive recorded between June 2009 and October 2010.

Hyunha Kim studied Photojournalism at San Francisco State University. She was a photo/videographer for Golden Gate Xpress and Xpress Magazine.