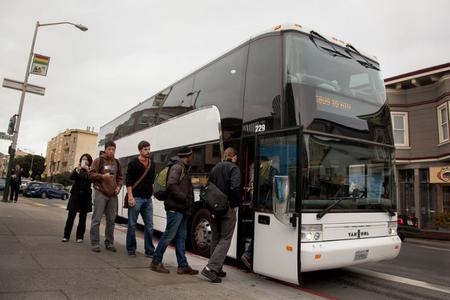 While San Francisco’s 350 private corporate buses take thousands of well-off tech employees to work in Silicon Valley every morning, and home to their urban apartments and flats every evening, the service gap in late-night public transportation leaves many of the city’s service workers without a ride to their homes far out of town.

Now, some critics are saying the transport and housing gaps are at the heart of the same affordability crisis.

Last week, activists and union members brought a lawsuit against San Francisco’s pilot program to allow private shuttles for Google, Apple, Genentech and other companies to use municipal bus stops, at $1 per stop, to pick up their employees each day.

The plaintiffs claim that the program, which was approved earlier this year, will bring more pollution, pedestrian and cyclist hazards, and the displacement of low- and moderate-income workers.

San Francisco has the least affordable housing market of any major American city, according to Bloomberg Businessweek. The city’s median monthly rent ballooned to $3,200 earlier this year.

Supervisor Scott Wiener, who defends the private-bus program, told KQED the lawsuit wrongly suggests that “the shuttles are causing our problems” and that this distracts attention from “actually solving our housing and transportation problems.”

One approach Wiener suggests is to improve after-hour public transportation options for the city’s 50,000 low- and moderate-income night-shift service workers, many of whom can’t afford to live in the city and must commute to and from here for work.

He and other supervisors have assigned a working group to come up with recommendations in the next six months to address the problem.

But is making it easier for lower-income workers to get in and out of town a real solution?

Speaking to KALW, Delene Wolf, head of the San Francisco Rent Board, linked San Francisco’s affordability crisis to the need to secure living space for its service workers, many of whom are forced to flee after work to more affordable surrounding cities.

“A lot of people who walk in the front door are desperate and they want help,” said Wolf about the daily flow of tenants at her office. “[W]e can’t get people replacement housing … Commuting from Antioch is not really viable for low-income people, though many of them are doing it.”

Wolf, like Wiener, did not blame private tech-worker buses for the city’s housing affordability crisis. She spoke about landlords, speculators and lack of affordable living options instead, and stressed the importance of rent control and defraying speculative evictions.

Meanwhile, as long as those issues remain a problem for San Francisco tenants, private buses for an estimated 35,000 upwardly mobile Silicon Valley employees may simply be flooding the city’s rental market with incentives for landlords and developers to price out low-and moderate-income people.