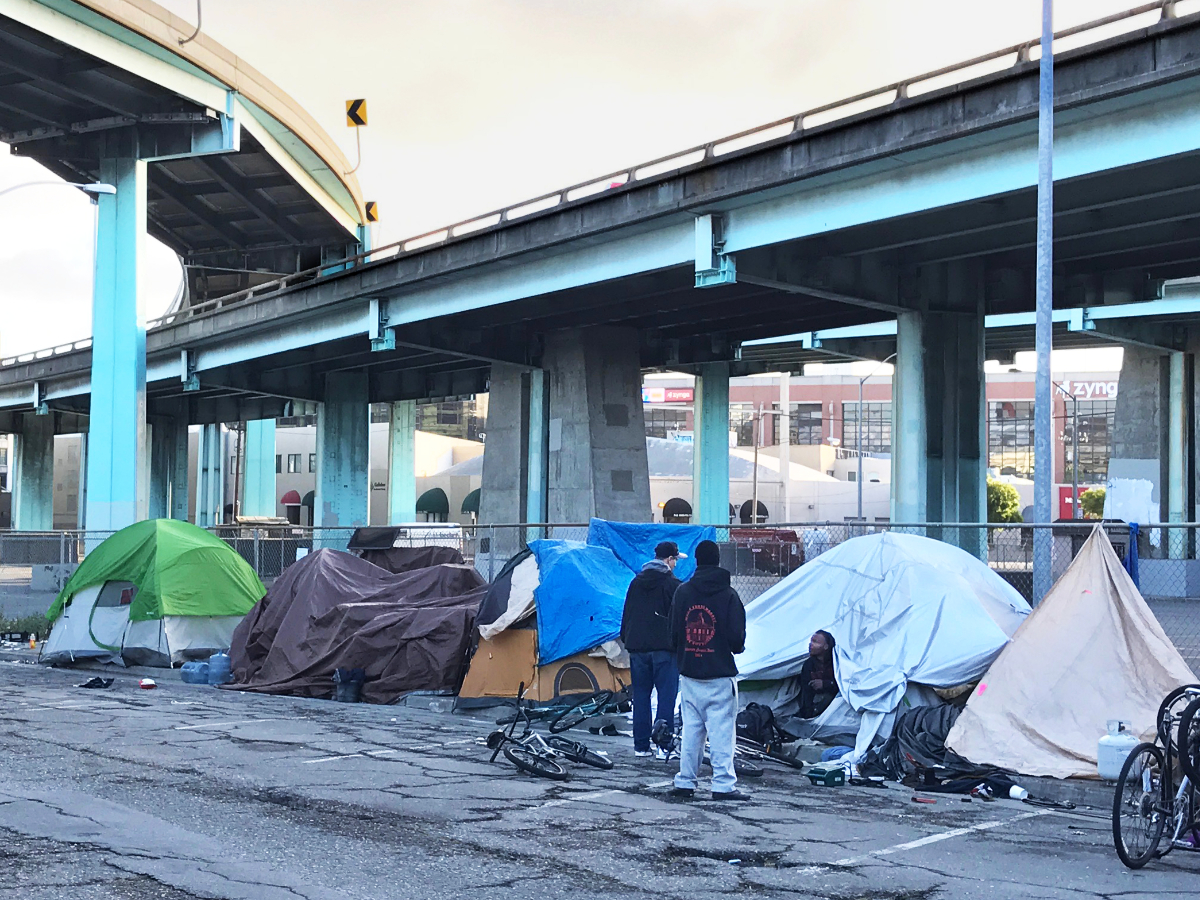 The occupants of homeless encampments like this one on San Bruno Avenue, photographed in 2017, tend to lack access to 24-hour bathrooms, showers and other amenities that would be present at government-regulated sites. Judith Calson / San Francisco Public Press

The president of the San Francisco Unified School District board plans to propose next week that the district offer at least one of its campuses as one of the city’s first-ever approved tent camps for homeless people.

The move is in response to Supervisor Rafael Mandelman’s Tuesday resolution urging the Board of Supervisors to support the concept, which would provide occupants bathrooms, tents and other amenities while enabling them to socially distance to limit the spread of COVID-19.

“To me, I would be confused as to why we wouldn’t want to do this,” said School Board President Mark Sanchez, who co-sponsored the policy resolution with Vice President Gabriela Lopez. The resolution is expected to be posted today in accordance with guidelines requiring policy initiatives to be announced 72 hours in advance of board meetings.

If passed, the resolution would add political momentum to Mandelman’s proposal, which the Board of Supervisors is set to vote on next week.

The School Board’s resolution does not name campuses under consideration for encampments. Mandelman previously told the Public Press that Everett Middle School, in the Mission District, was a “natural” for this purpose, and that some residents supported the idea.

The Mayor’s Office and Department of Homelessness and Supportive Housing have not fully backed the concept of a sanctioned encampment, also called a safe-sleeping site. At a Wednesday press conference, Abigail Stewart-Kahn, director of the homelessness department, said the city was weighing the approach.

“Many cities across the country have had sanctioned encampments in the past with mixed success and safety,” Stewart-Kahn said, “and so the city is evaluating whether the coronavirus makes that more urgent now, and is working toward plans toward safe-sleeping sites for the most impacted neighborhoods and individuals living in San Francisco.”

Any sanctioned encampment rollout would be complicated by limited staffing — the city would be pulling from the same pool of disaster service workers, called DSW, to help homeless people quarantine in hotel rooms as well as regulated encampments, according to Stewart-Kahn.

“We cannot, without the help of our providers, and all of our DSWs and city workers, open all of these things all at the same times safely,” Stewart-Kahn said.

“It feels to me like we’re making solid progress,” Mandelman said of the school board’s resolution. “I’ve been hoping that this would be a thing that happens in May, and I think that seems entirely possible.”

“The first preference would be to get people into hotel rooms, so they can isolate,” Fewer said. “But in absence of that, I would think that these encampment sites would actually be a good idea.”

She said she expected a majority vote in support of Mandelman’s resolution Tuesday, “because we’re seeing encampments in every neighborhood.”

“I cannot imagine that it will not pass unanimously or close to it,” Peskin said, pointing to a recent unanimous board vote to secure 8,250 hotel rooms by April 26, including 7,000 designated for homeless people.

Even if sanctioned encampments put the city further into financial deficit, it would result in long-term savings, he said.

“Let’s be perfectly clear,” Peskin said. “If you have massive outbreaks, they’re all going to still get treated at San Francisco General Hospital, where it’s going to be much more expensive to society.”