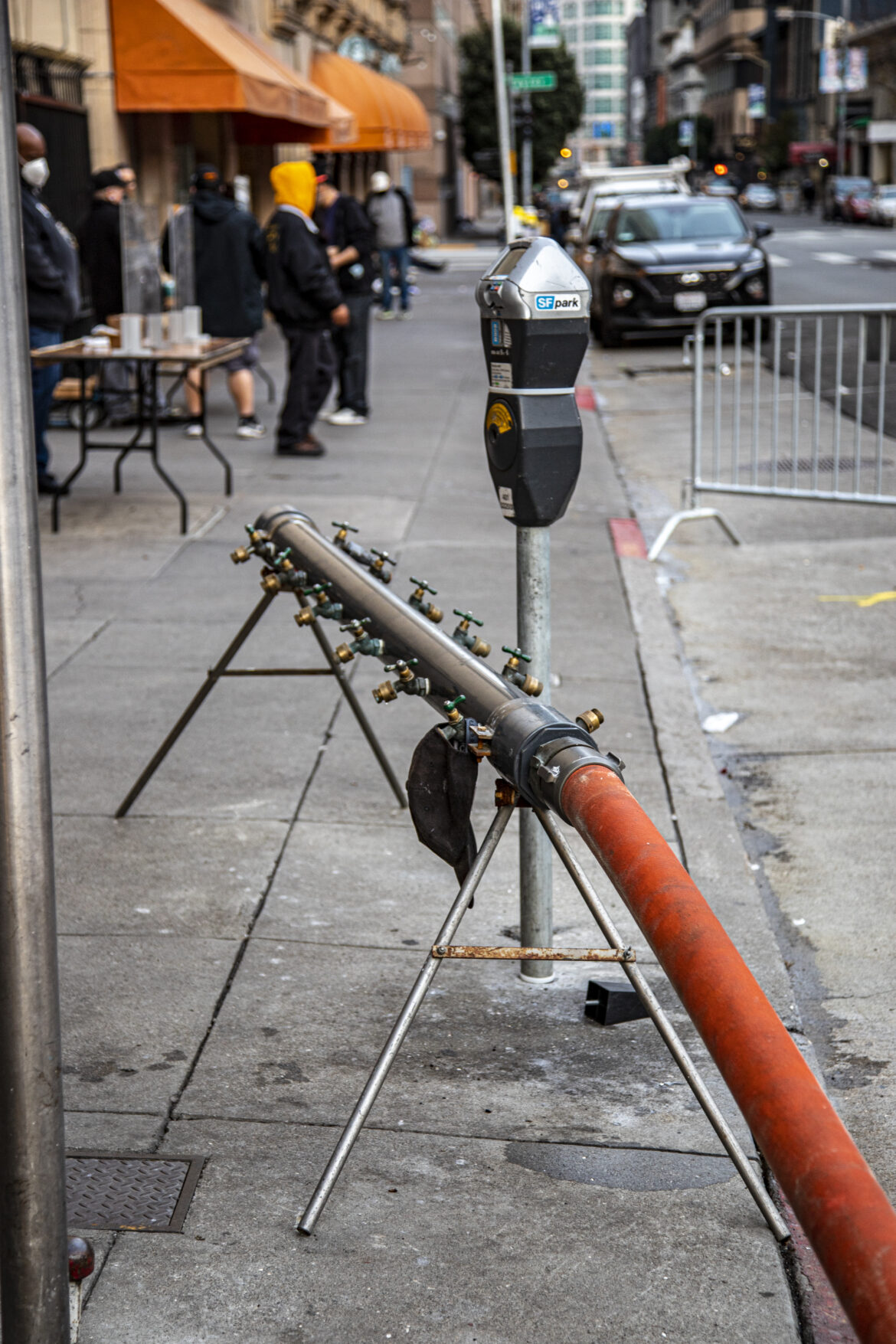 A water spigot in the Tenderloin is one of several San Francisco set up to help homeless residents with limited water access.

The lack of fresh water available to homeless people in San Francisco during the COVID-19 pandemic constitutes a “human rights abuse,” a community organizer said as the city’s shelter-in-place orders drag into a second year.

Before the pandemic, many of the city’s homeless residents relied on bathrooms in restaurants, libraries and other public facilities to bathe, collect drinking water and use the toilet. The shelter-in-place order shuttered many of those spaces, leaving homeless residents without water access when good hygiene was paramount to containing the spread of the coronavirus.

A year later, many homeless residents still face the same hurdles to water access, a report by the Coalition on Homelessness says.

“This is a human rights abuse,” said Carlos Wadkins, a coalition organizer. “Homeless San Franciscans are living at a standard beneath what any organization that focuses on water would call adequate access.”

The report draws from questionnaires filled out by 73 unhoused or formerly homeless residents in the Tenderloin, Mission District and Bayview in December, January and February. Surveyors walked around the neighborhoods asking the unhoused residents they encountered to complete the questionnaires. Participants received bottled water, hygiene kits and a gift card in exchange for participating.

The San Francisco Public Utilities Commission, which manages the city’s water system, was not involved in the survey and therefore could not comment on its findings, said commission spokesman Will Reisman, adding that the commission “firmly believes that access to water is an essential human right.”

Most of the respondents could not procure the minimum daily allotment of water recommended by the United Nations.

The coalition plans to release a report on its findings Tuesday, the anniversary of the first pandemic shelter-in-place order enacted by the Department of Public Health. The standards the report cites come from the United Nations High Commissioner for Refugees and Sphere, a humanitarian organization that publishes a handbook of recommendations for refugee aid groups.

The coalition uses these standards because there are many similarities between the living conditions of homeless people and refugees, and because these standards establish “the bare necessities of maintaining life,” Wadkins said.

Housed San Franciscans use more than 158 liters per day on average, according to a 2019-2020 annual report by the San Francisco Public Utilities Commission.

In January, Eric Coler told the Public Press about his experience of hauling six gallon-sized water jugs more than a mile between the nearest accessible water fountain and his tent in the Tenderloin and South of Market neighborhoods. He spent hours hauling the jugs, sometimes twice in a day, and he still didn’t have enough to keep himself clean. The city later placed him in an emergency hotel room.

“I went three to four weeks at a time without washing my clothes,” Coler said.

After months of complaints from homelessness service groups about the lack of water access, the utilities commission installed permanent drink taps in January and February to replace some of the temporary water spigots the city rolled out in neighborhoods with large homeless populations.

The new fountains are part of a 10-year-long program to install about 180 fountains across the city, Reismann said, adding that the utility commission would continue to work with community groups to address water access.

The coalition plans to present the report at a public Zoom meeting at 11 a.m. Tuesday.