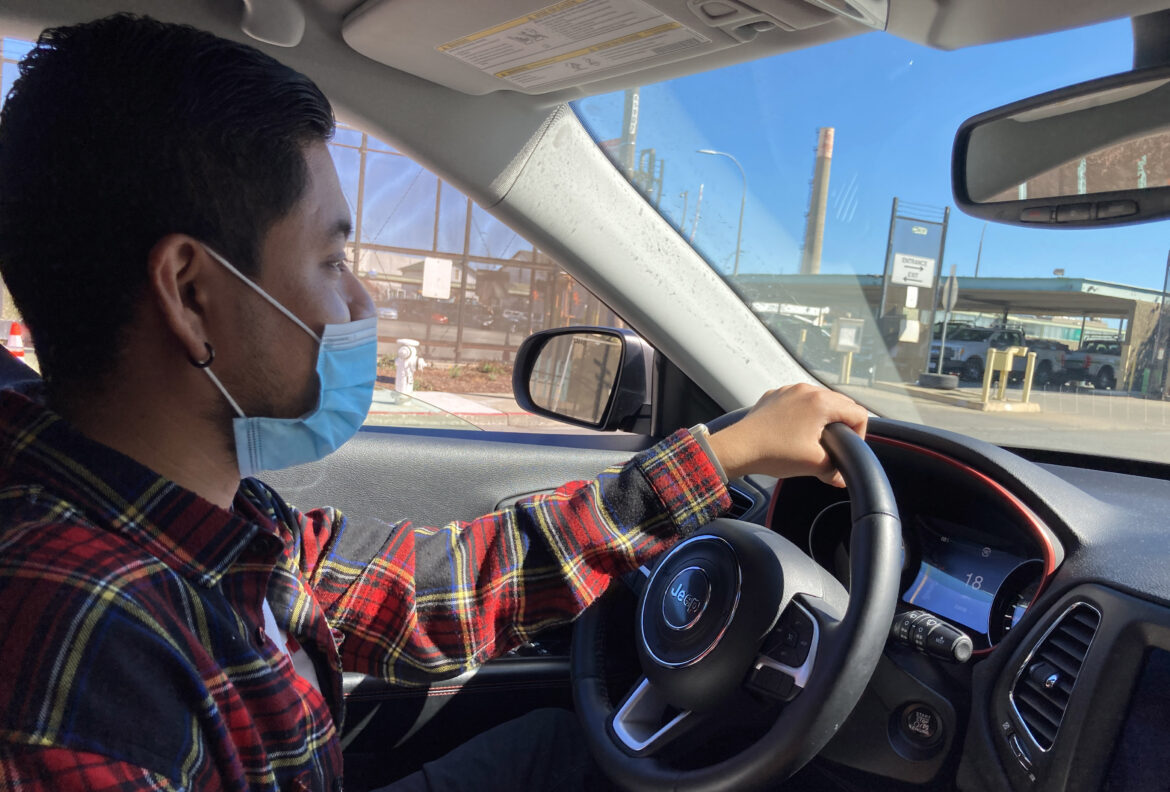 Agustin Angel with Bayview Hunters Point Community Advocates drives through the neighborhood with boxes of produce, hand sanitizer and PPE to distribute.

When Agustin Angel walks up to a door, knocks and waits, he knows this conversation about vaccination could go a number of ways.

“Every interaction is different,” he said. He generally starts by politely introducing himself and saying that he works with Bayview Hunters Point Community Advocates, and that he’s going door to door trying to get a sense of people’s vaccination status and their feelings about the vaccines available against COVID-19.

“Sometimes you do get some folks that are willing to have a conversation with you and talk about the vaccine and why they have gotten it themselves, and what vaccines, and how did they affect them,” Angel said.

In the neighborhood as a whole, most have already gotten their shots. Angel and his colleague Corey Monroe work in a community that, at 93%, has one of the highest estimated vaccination rates in the city. Monroe, whose work is focused on connecting unhoused residents with resources, says part of the reason for that high vaccination rate is precisely because of on-the-ground outreach work Community Advocates and other agencies have been doing. That work continues and will for the foreseeable future. Monroe said he expects COVID vaccinations may be needed annually.

Still, as the Public Press previously reported, Bayview Hunters Point also continues to have high rates of COVID-19 infection, and this could be partly explained by pockets of much lower vaccination rates than the neighborhood overall. Angel and Monroe said they have heard many reasons why someone might not want to get vaccinated against COVID-19. Some people worry about the side effects, some fear it will affect their reproductive health, others are afraid the mass vaccination effort is actually an experiment on unwitting subjects. Still others simply hate the idea of being mandated or coerced into anything.

“It’s all kind of things that people are just so against it. It’s just a big resistance,” Monroe said. “I do know when people get sick, they do change their mind and want the shot.”

Some people mistrust the government when it comes to public health because of the racist legacy of experimentation and exploitation, exemplified by incidents like the Tuskegee Study, in which African American participants with syphilis were left untreated. But such concerns are a poor predictor of which ethnicities are more or less likely to have been vaccinated in San Francisco. In fact, city health department data shows white people are the least vaccinated, at 69%, of those ethnicities tracked.

“I think it’s across the board,” he said. “I mean, Muni, the police, the fire department, BART — you have people saying they just not getting the vaccine.”

At this point, Monroe said he worries about people losing their livelihoods.

“If you don’t get the vaccine by certain dates, you’re losing your job. And I’m like, ‘how are you gonna take care of your family though?’” he said.

For those who are still hesitant, outreach workers hope getting information from trusted, locally rooted messengers will help alleviate fears. When someone says they haven’t received the vaccine, Angel said he probes what’s behind that decision.

Angel can offer to connect residents with a doctor who works closely with community health groups who might address some of their fears. If it helps, his organization can even make an appointment for a later date and bring the vaccine directly to someone’s home. He also shares information about the nearest vaccine sites and testing sites.

With conflicting messages coming from politicians, national media and distant health officials, Monroe said, it can be hard for anyone to know whom to believe. But some people will believe community outreach workers.

“I don’t have all the right answers,” he said. “I just want people to be alive and safe.”