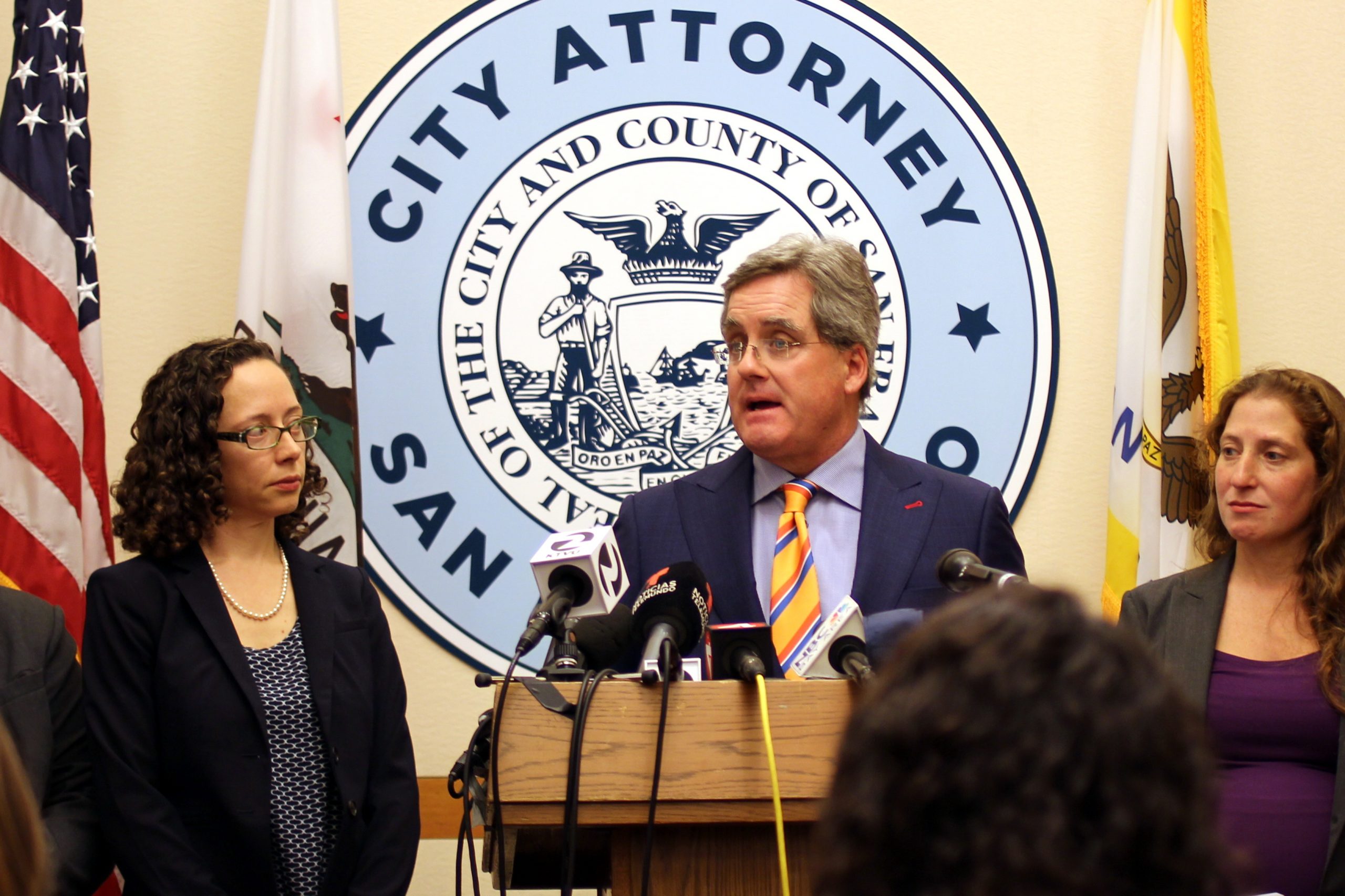 A U.S. judge Tuesday temporarily blocked the Trump administration from denying federal funds to San Francisco, Santa Clara and 400 other so-called sanctuary jurisdictions nationwide that do not cooperate with immigration agents seeking to deport undocumented residents.

Ruling in a lawsuit filed by San Francisco and Santa Clara counties, U.S. District Judge William Orrick rejected the Justice Department’s argument that a key section of President Trump’s executive order in January would affect only three law-enforcement grant programs, with limited or no financial impact. He also ruled that the counties are “likely to succeed” on their claims that Executive Order 13768 “wields powers exclusive to Congress, and violates the Tenth and Fifth Amendments.”

“These constitutional violations are not limited to San Francisco or Santa Clara, but apply equally to all states and local jurisdictions,” Orrick wrote in his 49-page ruling. “Given the nationwide scope of the Order, and its apparent constitutional flaws, a nationwide injunction is appropriate.”

White House Chief of Staff Reince Preibus called the ruling an example of “the Ninth Circuit going bananas,” and said that it will eventually be overturned by the U.S. Supreme Court. Preibus made the statement in error; Orrick does not sit on the Ninth U.S. Circuit Court of Appeals, though it does ecompass his district.

But Orrick said the administration could use “all lawful means” to enforce existing conditions for federal grants or a statute requiring local authorities to cooperate with immigration actions. He also declared that the injunction does not restrict the administration from “developing regulations or preparing guidance” on designating a “sanctuary jurisdiction.”

Additionally, Orrick rejected the “extraordinary remedy” of issuing a separate injunction against Trump, which San Francisco and Santa Clara had sought.

“It is not clear how an injunction against the President would remedy the constitutional violations the Counties have allege,” Orrick wrote.

“Faced with the law, the Trump administration was forced to back down,” he said in a statement, and then repeated at a press conference. “This is why we have courts — to halt the overreach of a president and an attorney general who either don’t understand the Constitution or chose to ignore it.

“This is why San Francisco had to stand up on behalf of people everywhere, be they immigrants or native born. As Americans, we all have a duty to confront injustice, even when it emanates from the White House.”

Herrera and city officials have been aggressive in trying to shield the city’s finances and residents from the president and Attorney General Jeff Sessions, who have frequently expressed hostility to San Francisco and other sanctuary cities.

The vast majority of the $1.2 billion annual federal funding pays administrative costs for health care, nutrition and other so-called entitlement programs for the poor, according to the city controller.

These grants are used, respectively, to fund various criminal justice programs, to reimburse jurisdictions for the price of holding undocumented aliens who have committed crimes and to support community policing programs. They also require compliance with a federal statute — known as 1373 — that forbids jurisdictions from preventing their employees from communicating with Immigration and Customs Enforcement officials about the immigration status of suspected undocumented residents.

Furthermore, Readler disputed that there was any reason for San Francisco to believe it was at risk of losing federal funding, arguing that the city has not been formally declared a sanctuary city by the federal government, despite pronouncements by Trump.

The Trump administration can still enforce compliance with 1373 as a condition of receiving these grants, Orrick said in his ruling.

The city argues that it complies with 1373.

If San Francisco were to lose access to the Justice Assistance Grant, it would lose funding for various criminal justice programs. Some of these programs are meant to reduce youth crime and recidivism, among other goals.

Carol Lu, citywide revenue manager at the San Francisco Controller’s Office, wrote that the city and county receive justice-assistance funds both directly and as a passthrough from the state. Federal funds, which are awarded in three-year periods, can be used for a wide range of criminal justice programs and activities. State funds are used to support two separate programs, one to reduce recidivism rates for youth aged 18-25 and the other to combat the school-to-prison pipeline.

For 2016 fiscal year, which ended June 30, city records show San Francisco spent $1.5 million in justice-assistance funds. Of that, nearly $670,000 came directly from the Department of Justice, while an additional $849,000 flowed into the city indirectly as a passthrough from the state.

A Juvenile Probation official said that the department, along with others, does not receive its funds directly, but instead have them passed along from the Department of Children, Youth and Their Families.

Max Szabo, the communications and legislative affairs manager for the District Attorney’s Office, wrote in an email that the office’s justice-assistance funds go toward the Drug Court, the Young Adult Court and the city’s Sentencing Planner.

Eileen Hirst, a sheriff’s spokesperson, said that about $80,000 of its grant helps pay the salary of a coordinator working with transitional-aged youth in San Francisco’s Young Adult Court.

The court, the first of its kind in the nation, was established in the summer of 2015. It is designed for youths ages 18 to 25, and based on neuroscience research that people in this age range are in a developmentally distinct state between adolescence and adulthood.

Hirst said that the coordinator works with youth in custody to do trauma screenings, identifying issues that might affect their behavior.

“This is a population that has frequently experienced trauma,” she said. “They do not fit a particular mental health diagnosis, but benefit greatly from counseling, therapy, and trauma screenings, which can identify the problem.”

The other $20,000 pay about one third of the salary for a coordinator working in San Francisco’s maximum-security facility, County Jail No. 4, she said. That coordinator works with prisoners through a program called Living in Balance.

The Juvenile Probation official, who asked not to be identified, said that justice-assistance pay for a probation officer who works to identify at-risk youth at Visitacion Valley Middle School, with the goal of increasing these students’ GPA and attendance to help prevent juvenile delinquency.

The District Attorney’s office also provided documentation saying that it had received a grant for about $997,000, to be distributed through quarterly payments between October 2013 and December 2017.

Szabo said in a phone interview that these funds are used to help victims of trauma in eastern Bayview. The program’s website says that the program is designed to improve services for crime victims and help them gain access to funds, in addition to broader goals of preventing crime and increasing treatment options for victims.

In their court briefs, attorneys for San Francisco and Santa Clara County argued that there was no guarantee that key figures in the Trump administration, such as Attorney General Jeff Sessions, would go along with this narrow reading of the executive order. Sessions declared in March that he would attempt to revoke “any funds” issued to jurisdictions that do not comply with the 1373 statute directing local authorities to cooperate with federal immigration agents.

Readler argued that interpreting Sessions’s statements as encompassing all federal funds, rather than only justice-assistance, alien-assistance and policing-services grants, was overly broad.

Furthermore, Readler argued that there was no current reason to believe that the federal government would target San Francisco. Though San Francisco has long declared itself a sanctuary city, and though the president and Sessions have both referred to San Francisco as such, the city may not be recognized as one under the executive order.

The order’s text describes sanctuary jurisdictions as “jurisdictions that willfully refuse to comply” with 1373. However, San Francisco has argued as part of its lawsuit that it does, in fact, comply, and therefore should not be targeted by the Trump administration. The city’s administrative code does not forbid employees from discussing an individual’s immigration status. In fact, the city amended the code in 2016 to make sure it did not violate 1373.

Readler pointed this out during his arguments, saying that the term “sanctuary city” has multiple definitions and that the federal government has not taken any actions against San Francisco, despite remarks by Trump and Sessions calling it a sanctuary city. If the administration declines to recognize San Francisco as a sanctuary city, then in theory, no funds would be affected.

On April 21, the Department of Justice’s Office of Justice Programs sent letters to nine jurisdictions informing them that they must certify compliance by June 30 as a condition of their Justice Assistance Grant. San Francisco was not among the jurisdictions sent a letter, though the California Board of State and Community Corrections, which passes justice-assistance funding to San Francisco, was.

Eleven cities in California received Policing Services funds, totaling $11,725,161. Of these, Oakland, also a sanctuary city, received $1,875,000 for “community engagement,” according to an award list on the Policing Services website.

Zachary Benjamin is a student at Dartmouth College, majoring in English. He interned with the San Francisco Public Press during the spring of 2017, investigating both homelessness and the impact of the Trump administration on San Francisco. At Dartmouth, he is involved with the student-run newspaper, The Dartmouth, where he has served as a managing editor as well as a reporter for the news section.