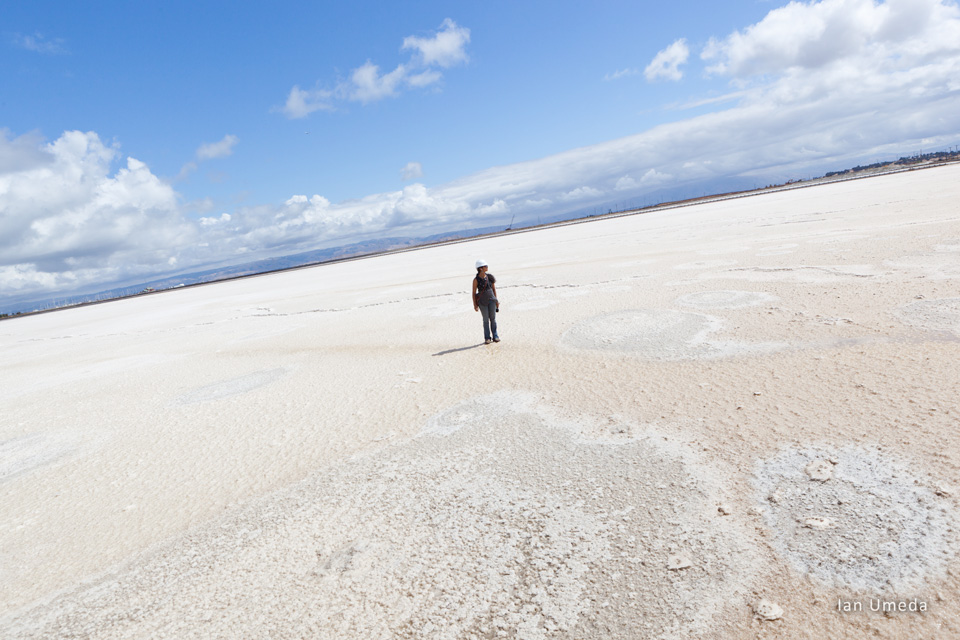 Maureen Nandini Mitra, Reporter |
LikeTweet EmailPrint More
The Bay Area needs more homes for its growing population, but does it make sense to house 30,000 people on unstable land, in earthquake country, that’s also at high risk of inundation by rising sea waters? A massive development proposal on the fringes of the San Francisco Bay, in one of the last potentially developable areas in the region, is raising questions about the definition of smart growth.
[The Public Press is developing an in-depth report for the fall print edition and the website. We are raising funds on the journalism micro-funding site Spot.us to pay for the reporting and photography on the story.]
For urban areas, smart growth usually means city-centered growth with convenient mass transit options, open spaces, and a mix of housing, commercial and retail developments. It’s considered an environment friendly, sustainable alternative to urban sprawl and gas-guzzling commutes.
A high-density development of this kind is being proposed in Redwood City, a suburban city on the San Francisco peninsula. The project proposes partially paving over 1,436 acres of sea level salt ponds and building 12,000 homes, offices, schools and playing fields on it.
The development would put new homes close to the Bay Area’s job centers in mixed-use, walkable communities that would be served by transit links from Redwood City’s new ferry terminal to its Caltrain station and the high-speed rail system. The project’s architect, Peter Calthorpe, says it would provide much-needed housing for the job-rich Peninsula and pay for bay wetlands restoration and public open space on 56 percent of the site (more than 40,000 out-of-town commuters drive into Redwood City to work every day).
Seen in isolation, it does seem a rather ideal project. But does it really take the Bay Area’s fragile ecosystem, and its extreme vulnerability to earthquakes and rising sea levels into consideration? Why build on salt flats that can be converted back to wetlands that serve as a natural buffer against rising tides and storm surges?
Using the proposed Redwood City project as a starting point, we will talk with urban planners, architects, scientists and developers to find out what constitutes "smart growth" in the Bay Area.

The impact of inevitable growth around the bay does need to be addressed. The Association of Bay Area Governments estimates 1.6 million new jobs in the region by 2035. At the current and historic jobs-housing ratio of 1.2 workers per home, that means the Bay Area would need 1.3 million new homes by then.
We do need to smart growth. But first, we need to figure out what that means for the Bay Area. Our reporting will hopefully give some insight on the subject and help the discussion along.
* * *

On Friday (Sept. 10) we met up with architect and urban planner Peter Calthorpe at his Berkeley office. A founding member for the Congress for New Urbanism, an advocacy group that promotes green building practices, Calthorpe’s a big name in the field of modern urban planning.  His vision of smart growth involves high-density, walkable, energy and water efficient communities, connected to each other by mass transit.
Calthorpe is also the proposed Saltworks project architect.
He told us that at the most basic level, smart growth in the Bay Area meant that, “once and for all we need to start housing our own workforce instead of pushing them out into the Central Valley and beyond.”
The Bay Area has one of the largest jobs-housing imbalance in California. Right now over 200,000 people commute to the Bay Area every day. Calthorpe believes only a mix of redevelopment on infill and new development on open space will help address the regions’ growing housing needs. Adding housing in the south Bay is especially important since that’s where all the job growth is. That’s why a huge development like the Saltworks project makes a lot of sense, he says. Especially since the plan proposes leaving 56 percent of the land as public open space.
“I think this kind of both-and approach is really the right approach,” he says. He accuses environmental groups like Sierra Club and Save the Bay, who are against the Saltworks project, as having a single-point agendas that don’t leave room for compromise between competing and equally valid agendas.
Spot.us community members, readers, Bay Area residents, we’d love to hear your thoughts on the subject. Do write in.
P.S: After consulting with our editors we extended our deadline as we figure we need more time to report this story out.
* * *

Yesterday we went back to Redwood City and met with officials from DMB Associates and heard their thoughts on smart growth and how the proposed development would be energy efficient, water efficient and would address the Bay Area’s growth needs in a smart way by reducing long commutes and hence, carbon emissions.
They told us that not all salt ponds are made alike and the ponds at the Saltworks site were different because Cargill had been making salt for industrial use out here. They said the land looked like a “moonscape” and was not going to be easy to restore to marshland because the site was “very heavily engineered.”
After a visit to the spot we have to agree, that the land did look a lot like barren lunar terrain – with water, mind you. However, regarding restoration to wetlands – apparently similar salt ponds once owned by Cargill in Napa are actually in the process of being restored. The land is now owned by the California Fish and Game department. You can read about it and compare our photo here: http://bit.ly/9e4JuY.
They also said the land is 1 to 2 feet above sea level at most places. Though it’s been previously reported that some of the land is actually below sea level (again, something we need to double check).
Regarding the levee height question we asked in our blog yesterday, DMB plans to build the levees about 7.2 feet above sea level, which more than takes care of the 4.58 feet (55 inch) standard the state recommends, with “whatever material the state specifies.”
Later in the afternoon we met with people at Save the Bay, an Oakland-based nonprofit which has been leading the charge against the Saltworks development proposal. David Lewis, Save the Bay executive director says there shouldn’t be any question of developing the site since the land is technically still a part of the San Francisco bay (it was leased to Cargill by the Army expressly for salt-making purposes, he says) and state and federal authorities have jurisdiction over it.  Need to confirm this with the Army Corps of Engineers. In April this year, the Army Corps reportedly sent a letter to DMB and Cargill saying that the Redwood City project was subject to the federal Clean Water Act. But Cargill denies any such jurisdiction.
* * *

Today, among other places in Redwood City, we visited Redwood Shores  an affluent neighborhood with million-dollar homes, condos, offices and waterfront marina.
Here’s what the book Redwood City: A Homegrown History by the Archives Committee of Redwood City Public Library, has to say about the place:
“The area now referred to as Redwood Shores is a 1,500 acre estate surrounded by Highway 101 on the west, San Francisco Bay on the east, Belmont Slough on the north and Steinberger Slough on the south. The site was originally part of an extensive marshland system that bordered the Bay along with what is now San Mateo County.”
Yep, built over nearly three decades (early 1970s to late 1990s) on filled in sea level marshland, protected by levees. Pretty similar to what’s being planned on a larger scale at the Cargill Salworks site. In fact, the original plan for Redwood Shores was actually for a city of 100,000 (this would include building on the neighboring Blair Island) but it was downsized over the years.
The neighborhood now comprises about 5,000 homes. Population: 15,000 (approx). Walk along the levees and you’ll notice that the homes are at least 6 feet lower. Perhaps two-three feet higher than the bay on the other side (I’m giving very rough estimates here. Hope to get more accurate figures from city officials soon). The bay isn’t visible from road level.
Apparently, it has cost Redwood City nearly $5.5 million in the past decade to raise and maintain the six miles of levees around Redwood Shores. Maintaining the levees up to Federal Emergency Management Agency standards is required so that homeowners don’t have to buy on flood insurance.
However, in 2008, when FEMA issued new flood maps, it determined that Redwood Shores was at risk of flooding because the stretch of levee near the San Carlos Airport was not high enough to withstand a deluge from San Francisco Bay. The city is now fixing the problem and hopes its levees will be certified this year. If the levees don’t get FEMA certification it would mean Redwood Shores homeowners would have to pay hundreds of dollars a year for federal flood insurance.
Incidentally, the Saltworks site lies within a FEMA designated flood zone. According to the information I have at hand right now, the plan is to protect the proposed development by building higher levees. We didn’t get to visit the salt ponds today. Have a tour scheduled with DMB Associates for tomorrow morning.
What we are curious about is just how high would the levees have to be to protect these shore-lands against a projected 16-inch rise (more recent estimates peg the figure at 29 inches) in sea level by 2050?
* * *

We are heading out to Redwood City tomorrow to get a lay of the land, talk to local residents and meet with the developer, DMB Associates, if possible. In the mean time, we’ve been reading up about the San Francisco bay. It’s fascinating stuff. Here’s a run down of some facts that might help us understand the region and the ecological context in which this development debate is playing out:
Most of the San Francisco shoreline, parts of Redwood City, the San Francisco and Oakland airports, are all built on reclaimed land. The South Bay, which includes Redwood City, has lost over 80 percent of its wetlands in the past 150 years.
California state and federal agencies are currently working to restore about 16,500 acres of deactivated commercial salt ponds in the South Bay to mixed intertidal habitat. Interestingly, the salt ponds themselves have, over time, become an important habitat for wildlife in the bay, especially for large and diverse communities of migratory birds and some 70 species of waterfowl. In fact, 9,000 acres of the Don Edwards San Francisco Bay National Wildlife Refuge comprise active salt ponds still owned by Cargill.
Perhaps there’s a case to be made for keeping the Redwood City salt ponds as is?
Next: What about housing needs?
We are a journalist-photographer couple who have been reporting on environment, sustainable development and human rights issues in the U.S. and India for over 13 years. Our work has been featured in publications like  - SF Public Press, The Wall Street Journal, Asia, The New Internationalist, Courier International,Sueddeutsche Zeitung , Down to Earth and The Caravan magazine
Maureen Nandini Mitra is a journalism graduate from Columbia University and has done extensive research on delta geology and ecology. She works part time atKALW public radio in San Francisco.
Ian Umeda has a MFA in photography, video and related media from the School of Visual Arts. When he's not out in the field with his cameras, he's stuck in front of a computer designing websites.