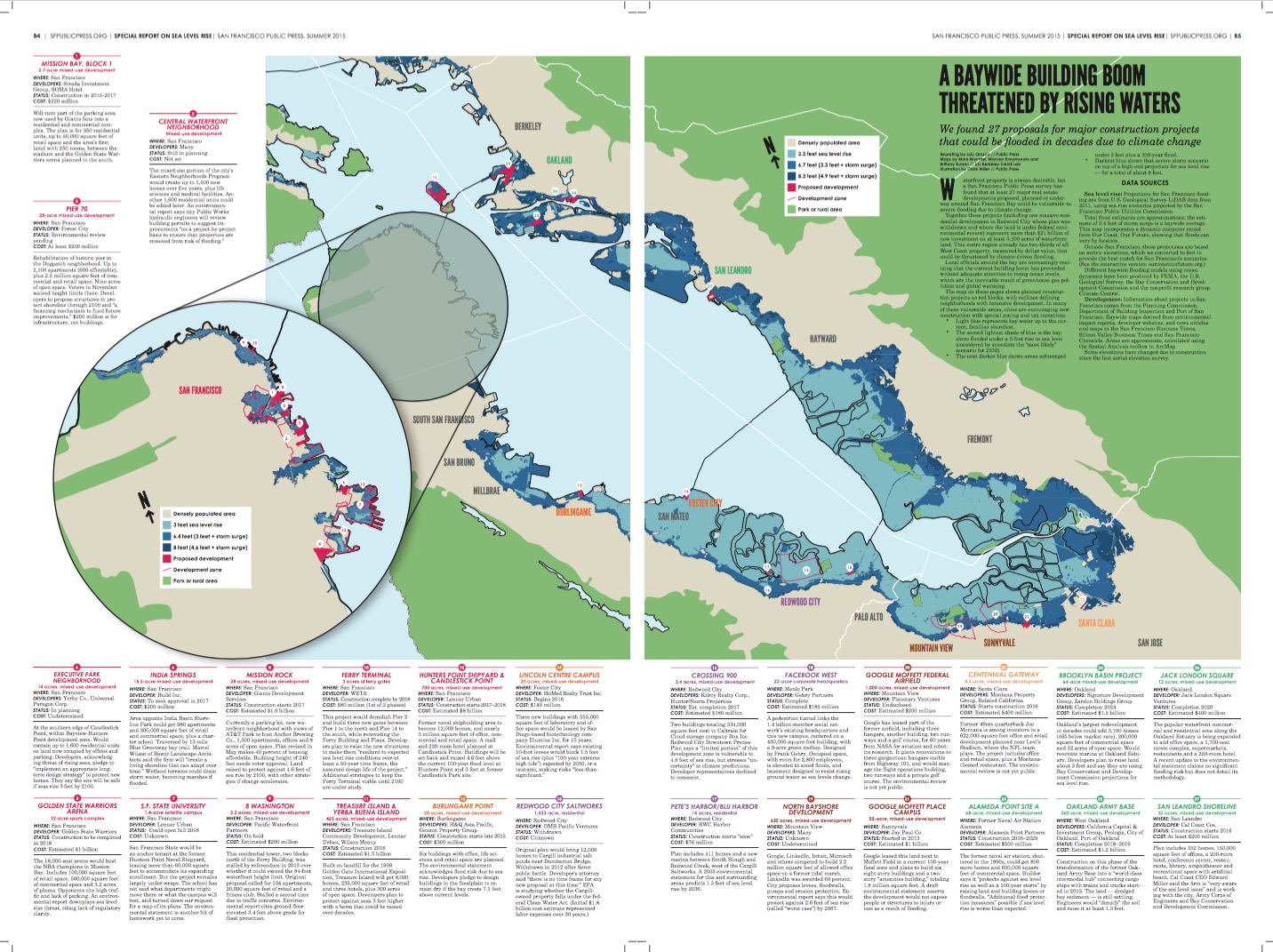 We found 27 proposals for major construction projects that could be flooded in decades due to climate change.

Waterfront property is always desirable, but a San Francisco Public Press survey has found that at least 27 major real estate developments proposed, planned or underway around San Francisco Bay could be vulnerable to severe flooding due to climate change.

Together these projects (including one massive residential development in Redwood City whose plan was withdrawn and where the land is under federal environmental review) represent more than $21 billion of new investment on at least 5,100 acres of waterfront land. This metro region already has two­-thirds of all West Coast property, measured by dollar value, that could be threatened by climate­-driven flooding.

Local officials around the bay are increasingly realizing that the current building boom has proceeded without adequate attention to rising ocean levels, which are the inevitable result of greenhouse gas pollution and global warming.

Our interactive map shows planned construction projects: In many of these vulnerable areas, cities are encouraging new construction with special zoning and tax incentives.

To compare other sea level rise outcomes — including a 3-foot rise in sea level (considered by scientists the “most likely” scenario for 2100) — download a pdf of the map from our print edition, or order a copy of the newspaper. Will turn part of the parking area now used by Giants fans into a residential and commercial complex. The plan is for 350 residential units, up to 50,000 square feet of retail space and the area’s first hotel with 250 rooms, between the stadium and the Golden State Warriors arena planned to the south. The mixed-use portion of the city’s Eastern Neighborhoods Program would create up to 1,500 new homes over five years, plus life sciences and medical facilities. Another 1,600 residential units could be added later. An environmental report says city Public Works hydraulic engineers will review building permits to suggest improvements “on a project-by-project basis to ensure that properties are removed from risk of flooding.” Rehabilitation of historic pier in the Dogpatch neighborhood. Up to 2,100 apartments (600 affordable) plus 2.5 million square feet of commercial and retail space. Nine acres of open space. Voters in November waived height limits there. Developers to propose structures to protect shoreline through 2100 and “a financing mechanism to fund future improvements.” $200 million is for infrastructure, not buildings. At the southern edge of Candlestick Point, within Bayview-Hunters Point development zone. Would contain up to 1,600 residential units on land now occupied by offices and parking. Developers, acknowledging threat of rising seas, pledge to “implement an appropriate long-term design strategy” to protect new homes. They say the site will be safe if seas rise 3 feet by 2100. Area opposite India Basin Shoreline Park could get 980 apartments and 300,000 square feet of retail and commercial space, plus a charter school. Traversed by 13-mile Blue Greenway bay trail. Marcel Wilson of Bionic Landscape Architects said the firm will “create a living shoreline that can adapt over time.” Wetland terraces could drain storm water, becoming marshes if flooded.

San Francisco State would be an anchor tenant at the former Hunters Point Naval Shipyard, leasing more than 60,000 square feet to accommodate its expanding enrollment. But the project remains largely under wraps. The school has not said what departments might move there or what the campus will cost, and turned down our request for a map of its plans. The environmental statement is another bit of homework yet to come. Photo courtesy of The Cordish Companies

Currently a parking lot, new waterfront neighborhood with views of AT&T Park to host Anchor Brewing Co., 1,500 apartments, offices and 8 acres of open space. Plan revised in May makes 40 percent of housing affordable. Building height of 240 feet needs voter approval. Land raised to protect against 4.6 feet of sea rise by 2100, with other strategies if change accelerates. This residential tower, two blocks north of the Ferry Building, was stalled by referendum in 2013 over whether it could exceed the 84-foot waterfront height limit. Original proposal called for 134 apartments, 20,000 square feet of retail and a fitness club. Stalled a second time due to traffic concerns. Environmental report cites ground floor elevated 3.4 feet above grade for flood protection. This project would demolish Pier 2 and build three new gates between Pier 1 to the north and Pier 14 to the south, while renovating the Ferry Building and Plaza. Developers plan to raise the new structures to make them “resilient to expected sea level rise conditions over at least a 50-year time frame, the assumed design life of the project.” Additional strategies to keep the Ferry Terminal viable until 2100 are under study.

Built on landfill for the 1939 Golden Gate International Exposition, Treasure Island will get 8,000 homes, 235,000 square feet of retail and three hotels, plus 300 acres of open space. Developers plan to protect against seas 3 feet higher with a berm that could be raised over decades. Photo courtesy of the City and County of San Francisco, Office of Community Investments and Infrastructures Hunters Point Shipyard

Former naval shipbuilding area to become 12,000 homes, and nearly 3 million square feet of office, commercial and retail space. A mall and 220-room hotel planned at Candlestick Point. Buildings will be set back and raised 4.6 feet above the current 100-year flood level at Hunters Point and 3 feet at former Candlestick Park site. Six buildings with office, life sciences and retail space are planned. The environmental statement acknowledges flood risk due to sea rise. Developers pledge to design buildings in the floodplain to remain dry if the bay crests 7.1 feet above current levels. Original plan would bring 12,000 homes to Cargill industrial salt ponds near Dumbarton Bridge. Withdrawn in 2012 after fierce public battle. Developer’s attorney said “there is no time frame for any new proposal at this time.” EPA is studying whether the Cargill-owned property falls under the federal Clean Water Act. (Initial $1.8 billion cost estimate represented labor expenses over 30 years. Plan includes 411 homes and a new marina between Smith Slough and Redwood Creek, west of the Cargill Saltworks. A 2003 environmental statement for this and surrounding areas predicts 1.3 feet of sea level rise by 2036. A pedestrian tunnel links the 1.4 billion-member social network’s existing headquarters and this new campus, centered on a 430,000-square-foot building, with a 9-acre green rooftop. Designed by Frank Gehry. Occupied space, with room for 2,800 employees, is elevated to avoid floods, and basement designed to resist rising ground water as sea levels change. Google has leased part of the former airfield, including three hangars, another building, two runways and a golf course, for 60 years from NASA for aviation and robotics research. It plans renovations to three gargantuan hangars visible from Highway 101, and would manage the flight operations building, two runways and a private golf course. The environmental review is not yet public. Google leased this land next to Moffett Field in a current 100-year flood zone and plans to build six eight-story buildings and a two-story “amenities building,” totaling 1.8 million square feet. A draft environmental statement asserts the development would not expose people or structures to injury or loss as a result of flooding. Former 49ers quarterback Joe Montana is among investors in a 622,000-square-foot office and retail development planned near Levi’s Stadium, where the NFL team plays. The project includes office and retail space, plus a Montana-themed restaurant. The environmental review is not yet public. The former naval air station, shuttered in the 1990s, could get 800 more homes and 600,000 square feet of commercial space. Builder says it “protects against sea level rise as well as a 100-year storm” by raising land and building levees or floodwalls. “Additional flood protection measures” possible if sea level rise is worse than expected.

Oakland’s largest redevelopment in decades could add 3,100 homes (465 below market rate), 200,000 square feet of commercial space and 32 acres of open space. Would renovate marina at Oakland Estuary. Developers plan to raise land about 3 feet and say they are using Bay Conservation and Development Commission projections for sea level rise. Construction on this phase of the transformation of the former Oakland Army Base into a “world class intermodal hub” connecting cargo ships with trains and trucks started in 2013. The land — dredged bay sediment — is still settling. Engineers would “densify” the soil and raise it at least 1.3 feet. The popular waterfront commercial and residential area along the Oakland Estuary is being expanded to add office space, a 1,700-seat movie complex, supermarkets, restaurants and a 250-room hotel. A recent update to the environmental statement claims no significant flooding risk but does not detail its methodology.

Total flood estimates are approximations; the estimate of 3.4 feet of storm surge is a baywide average. This map incorporates a dynamic computer model from Our Coast, Our Future, showing that floods can vary by location.

Outside San Francisco, these projections are based on metric elevations, which we converted to feet to provide the best match for San Francisco’s scenarios. (See the interactive version: ourcoastourfuture.org.)

Development: Information about projects in San Francisco comes from the Planning Commission, Department of Building Inspection and Port of San Francisco. Baywide maps derived from environmental impact reports, developer websites, and news articles and maps in the San Francisco Business Times, Silicon Valley Business Times and San Francisco Chronicle. Areas are approximate, calculated using the Spatial Analysis toolbox in ArcMap. Some elevations have changed due to construction since the last aerial elevation survey.

Lulu Orozco is a reporter for the Public Press. She has worked as a news reporter and editor for the Golden Gate Express at San Francisco State University. She has freelanced for many news organizations was formerly the managing editor at El Tecolote.