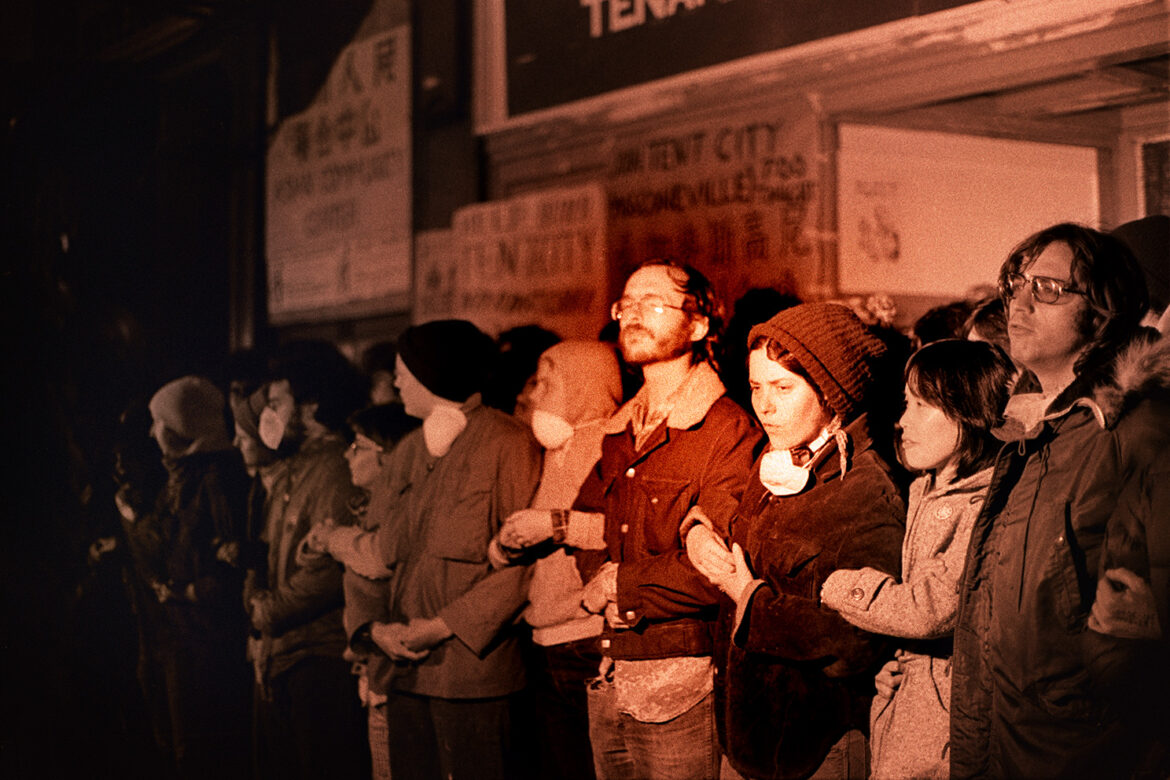 Demonstrators link arms in front of the International Hotel at Kearny and Jackson Streets in San Francisco on Aug. 4, 1977.

Jeanette Gandionco Lazam moved into affordable senior housing at the International Hotel in June, a difficult decision for her. She was returning to a place from which, 44 years ago, she had been violently evicted.

“You watch TV or you hear about evictions, and you never think it’s gonna happen to you,” she said. “Aside from all the political ramifications and struggles we went through to save this building, on a very personal level, it damaged me to some extent.”

The International Hotel on the corner of Jackson and Kearny in San Francisco is the second of its name. The original was a residential hotel, with small rooms affordable to low-income workers. At the time, it was mostly senior Filipino men who lived there, people who had worked for decades in agriculture, canneries or the service industry. The hotel was slated to be razed as part of the city’s urban renewal efforts, which were already targeting and removing communities of color under the guise of reducing so-called blight. The 10-block stretch of the city that thousands of Filipinos called home, known as Manilatown, had already been hit by this systemic displacement.

“The I-Hotel was the last remnant of Manilatown,” said Estella Habal, a professor emerita who taught courses in Asian American history and  women studies at San Jose State University. Habal was also an activist who was thrown out of the hotel that night alongside its residents. “It became kind of like a political touchstone because, you know, it was the last block.”

Tenants organized and successfully resisted the eviction for years, but on Aug. 4, 1977, more than 100 residents were evicted all at once, despite thousands of protesters outside. Law enforcement officers on horseback and with batons plowed through the demonstration, while others scaled the building on fire ladders to get at the tenants inside. All were expelled.

“We all were at Portsmouth Square at five o’clock in the morning with this fine mist, this San Francisco fog,” Lazam said. A neighboring community organization took the tenants in. “They got mats, and we all lay down, and we all fell asleep, because we were up the whole night.”

Some tenants were put up at a different hotel, others moved in with family members. But the community that had formed among tenants was fractured.

“It just wasn’t the same. And then many of the tenants, myself included, we began to go our separate ways. And so that community that we once had totally disintegrated,” she said. “Within a year or two, many of the older tenants passed. So that’s where we went.”

Devoid of residents, the hotel nonetheless remained standing for two years after the eviction.

“It’s just a tragedy all the way through, you know? And after it got demolished, it was a hole in the ground for so long,” Habal said.

Its original residents may have been scattered, but the momentum of the activism around the I-Hotel carried on long after the eviction. Habal said a group of organizers from the hotel formed the Manilatown Heritage Foundation in the 1990s. Its members collaborated with the Chinatown Community Development Corporation and St. Mary’s church to exert the pressure it took to green-light the development of affordable housing on the site. Decades after the eviction, a 15-story apartment building and a community center were constructed. The apartments opened in 2005. On the ground floor, the Manilatown Heritage Foundation operates a gallery and community center. Every year, it marks the anniversary of the eviction.

“It’s a solemn celebration, because of what happened that day. But also we want to celebrate our ancestors’ resilience, their determination,” said Eleanore Fernandez, executive director of the Manilatown Heritage Foundation.

The men who lived at the I-Hotel were solitary, prohibited by law from marrying white women and from bringing their families. They lived in quarters barely large enough to accommodate a twin bed. But Fernandez said she wants to look beyond the difficulty of their condition and the drama of the eviction at how the community persisted.

“Even though I think people talk about them working hard or what happened that night, there was a lot of joy that they had in each other, in their friendships in that community,” she said.  “I want us to look back on it and make our own history and be kind of inspired by it.”

The Manilatown Heritage Foundation will host a commemoration on Wednesday, Aug. 4. Details are at manilatown.org.