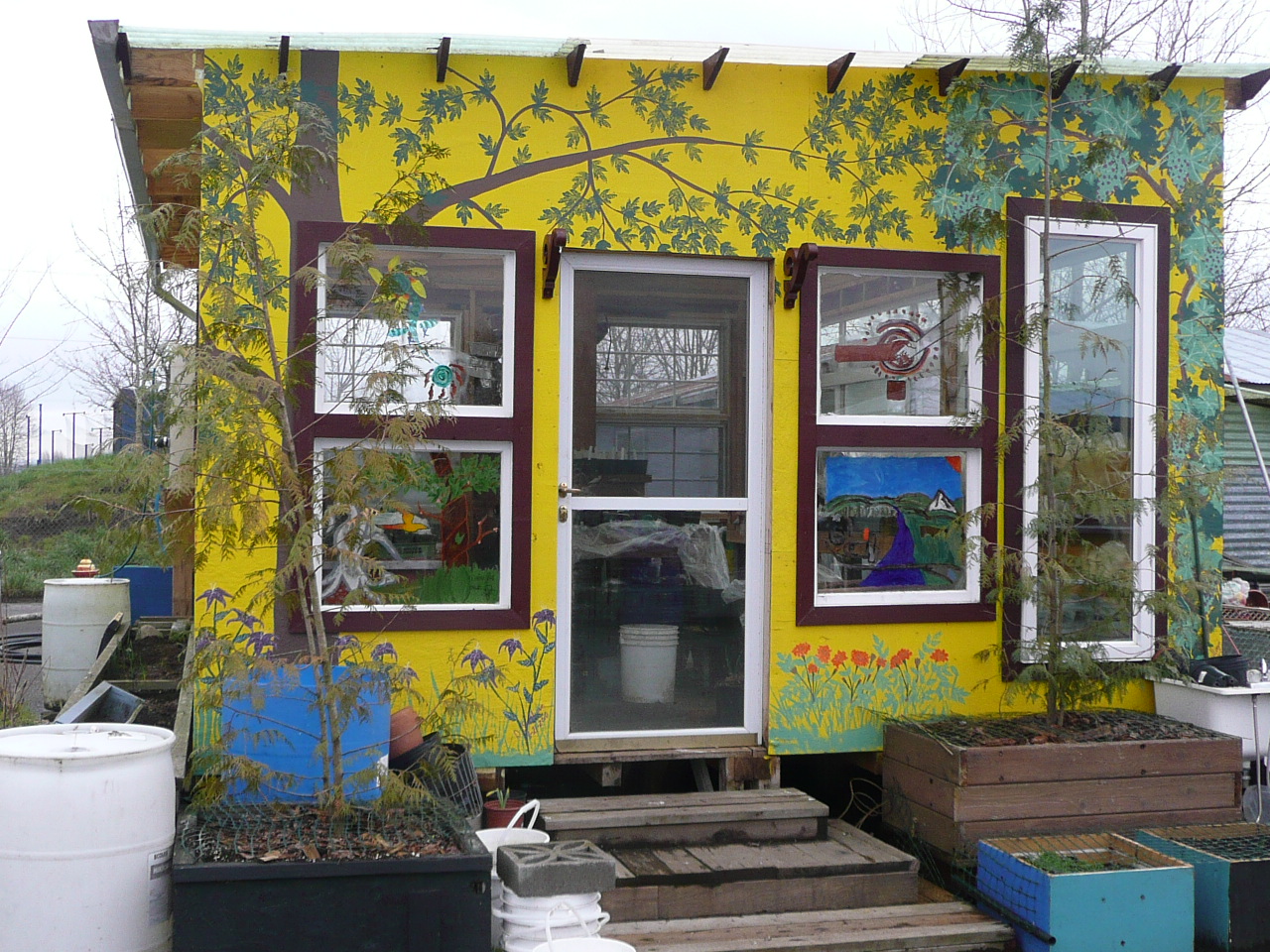 Dignity Village, in Northeast Portland, was the city's first sanctioned encampment. It has evolved and relocated several times since it began in 2000 as a transient protest camp under a downtown bridge. Photo via City of Seattle Council.

San Francisco officials have been skeptical of sanctioning homeless encampments as transitional housing, but local activists note that the model has a long track record in the Pacific Northwest.

Wherever they appear, city-approved camps are never without critics or potential problems — violence, crime, addiction and cleanliness. But for several years they have been generally accepted or tolerated, depending on concerns about public health and safety.

“All these projects are iterations of the same concept,” said Amy Farah Weiss, founder of the nonprofit Saint Francis Homelessness Challenge in San Francisco. “If there’s an issue at one, that doesn’t mean the concept is a failure. We just need help and oversight.”

[Related: Will San Francisco Embrace ‘Sanctioned’ Camps for the Homeless?]

Here are looks at three cities that have approved encampments for many years:

The Emerald City has one of the most “involved” encampment programs in the country, a 2016 report published by the Homeless Rights Advocacy Project at the Seattle University School of Law found.

Seattle has permitted religious institutions to host camps for more than 15 years, and in November 2015 began funding and managing encampments of tents and tiny houses on public land. Four camps exist today, home to about 170 people. In January, the city council approved three additional camps, which are expected to open in May or June. Each is funded for one year, with optional one-year extensions, and all will end in five years without renewal.

Meg Olberding, from the Seattle Human Services Department, said roughly 30 percent of residents have found permanent housing and about 20 percent have moved into other indoor options since the initial camps opened.

The Seattle advocacy groups SHARE / WHEEL — Seattle Housing and Resource Effort, and Women’s Housing, Equality and Enhancement League — operate three self-managed camps that are generally housed on parish properties in and around Seattle. Affiliated with the faith-based community, both organizations are run by homeless and formerly homeless men and women.

Tent City 5 is SHARE’s newest camp and the first of three camps sanctioned by the city. Tent City 5 is home to 45 tents and about 70 people in the city’s semi-industrial Interbay neighborhood, where it will stay for a year, with an optional second year. Residents elect five members to enforce rules, organize community meetings and manage everything from security to cleanliness.

“There is very limited contact or need for other authority,” said Charlie Johnson, a resident and camp adviser at Tent City 5.

Its sister camp, Tent City 3, which opened in 2000 and relocates every three months, took up residence on the University of Washington campus in December.

The third transitional encampment, Othello Village, opened in March 2016 featuring a mix of tents and huts for up to 100 people for a year or more.

“I was sleeping on the street and in night shelters, but coming to Tent City 5 has really allowed me to stabilize, mentally and physically,” Johnson said. “The camp provides an engaging social environment. You’re forced into a social structure. I went from despondency to much higher functionality, and ultimately I’ll be working in the next month. It’s been huge for me.”

Johnson said the camp does not work for every segment of Seattle’s homeless population, especially people with extreme mental illness or addiction. But Mayor Ed Murray announced that a new camp would open in March for homeless people with drug or alcohol addictions. The camp will be structured like Tent City 5, but will be managed by paid staff instead of residents.

The Seattle Police Department is “100 percent on board” with the camps, said Sgt. Sean Whitcomb.

Whitcomb said he believes that the majority of Seattle residents agree that some sort of structure is important.

Last year’s annual homeless count found more than 4,500 people without shelter, a 32 percent increase over two years. The 2017 census, completed in late January, will not be released until spring, organizers said, so more detailed analysis can be done.

Dignity Village, the city’s first sanctioned encampment, has evolved and relocated several times since it began in 2000 as a transient protest camp under a downtown bridge. Since 2004, the nonprofit tiny-house hamlet has occupied city-owned land sits in the Sunderland neighborhood of Northeast Portland, about six miles from the Portland International Airport.

The “transitional housing campground,” authorized under a state statute, is built mostly with recycled or donated materials. Its 60 residents pay $35 a month to cover operating costs, with remaining expenses covered by mico-business revenue and private donations. After a 60-day probationary period, residents can stay for two years, and possibly longer if they can show they are actively seeking employment, education or housing.

Like many camps, it has rules against bad behavior, violence, theft, alcohol or drugs. Children are not allowed, because background checks are not a requirement to stay.

Portland’s other prominent encampment, Right 2 Dream Too (known as R2D2), was established in 2011 on private property in the city’s Old Town-Chinatown neighborhood and provides shelter for about 70 to 100 people a night.

Ibrahim Mubarak, board president of the Western Regional Advocacy Project and founder of Right 2 Survive, also co-founded and lived in R2D2. He said more than 400 R2D2 residents found housing and work since the camp opened, 42 people quit drugs and roughly 20 people have enrolled in college, two of whom graduated.

He also said crime in the neighborhood has decreased by 0.8 percent since the camp moved in. “Crime goes down because people are watching,” Mubarak said. “There’s a sense of community and code of conduct — no prostitution, no drugs, alcohol or violence. Even the business association that didn’t want us there at first supports us now.”

Former Portland Mayor Charlie Hales praised the camp as “a unique community doing valid work in a special way that no government agency ever thought of.”

But R2D2 is not free from controversy.

Helen Ying, president of the Old Town Chinatown Community Association, said her organization has been concerned about the location of the camp since it opened.

“We want to work with the city, we’ve been very patient,” Ying said. “We’ve met with the mayor about our concerns, testified with the city council and other groups.”

Ying said the camp’s location next to the Chinatown gate is far from ideal, because the surrounding streets are regularly crowded with people and their belongings waiting to get in. She said some neighbors are concerned about increased lawlessness and that potential investors are deterred by the camp’s presence.

“Our neighborhood doesn’t have another lot that could accommodate R2D2,” she added.

City officials have been trying to find a new location for the camp since 2013, but have been stymied by neighborhood opposition and rulings by the state’s land-use board.

In February, two Portland development companies planning to renovate a hotel across from the camp sued to evict the residents. The companies argue that R2D2 violates city zoning codes and state permitting rules for setting up camps, and impedes redevelopment.

Another Portland camp, known as Forgotten Realms, occupied city land and was tolerated for nearly a year until a fire broke out in December and damaged a neighboring home. In January, the city cleared the camp.

Portland’s new mayor, Ted Wheeler, has said he wants to move away from tent encampments and instead build enclaves of tiny houses on public property, an idea advanced by his predecessor Hales.

On March 8, residents of the Kenton neighborhood in North Portland overwhelmingly approved a pilot enclave of 14 tiny houses for homeless women. The little cabins will be 8 feet by 12 feet with storage space, shared restrooms, common space and a garden.

“We know we can do better,” Wheeler told residents on a cold, rainy night. “This is not permanent housing for people who are truly in distress, this is obviously not the kind of supported housing people would like to see on the other end of the homeless services spectrum, but it’s an important gap we’re filling.”

The “accessory dwelling units” cost $75,000 each and the first four are to be ready in June. Homeowners, who would agree to be landlords for five years, would get the little houses for free but would have to maintain them for homeless families. The country envisions up to 300 units in the next year.

Every night, the city estimates, 4,000 people sleep on Portland streets or in shelters.

Sanctioned villages first appeared in the University of Oregon’s hometown in 2013 after the city council created the Rest Stop Program. Today, with a homeless population of nearly 3,000, the city is home to six rest stops, each hosting 18 to 20 people in tents or 60-square-foot Conestoga huts designed by the nonprofit Community Supported Shelters. The organization also manages four of the six rest stops, which in 2016 served 171 people.

One rest stop prioritizes people with disabilities; another serves veterans; one primarily handles young adults, and another is for single women. Eugene has renewed the program four times, but it is scheduled to end March 31.

The nonprofit SquareOne Villages opened Opportunity Village in 2013, copying the Dignity Village model in Portland. Roughly 30 people at a given time stay there, with an average stay lasting less than two years. About 20 percent of residents have lived there since the camp opened.

Self-managed, the camp has an oversight board of residents, clergy and others from the community. Construction is to start in April on a second village.

These communities occupy city-owned or leased property, but are otherwise funded by private donations.

While the Eugene and the surrounding community have agreed to a general set of rules, Opportunity Village is self-governed and managed. A village council of five to seven elected residents holds weekly meetings and maintains order.

For the Eugene Police Department, crime has not been a problem.