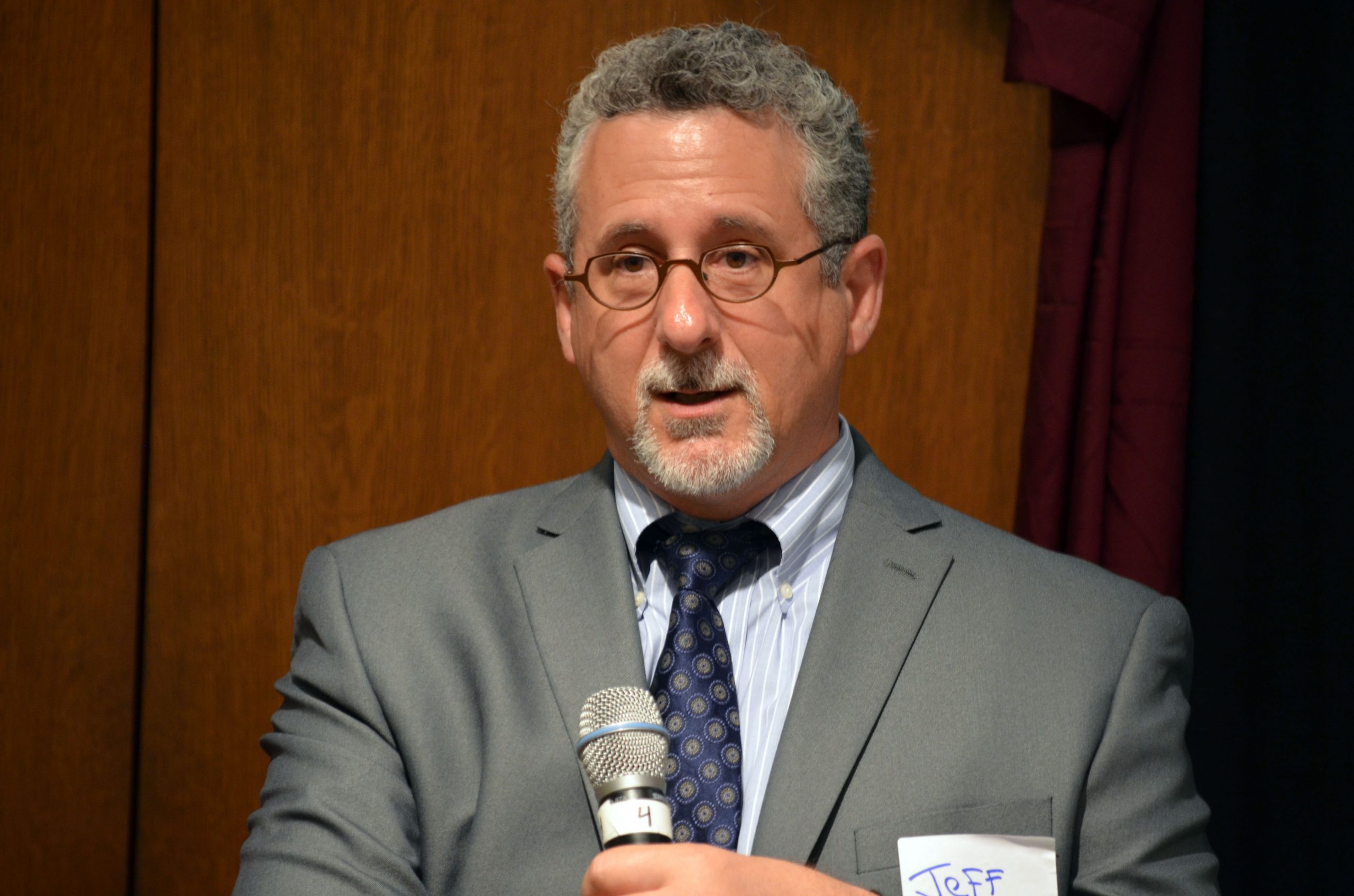 In many newsrooms, “the homeless” is a well-worn catchphrase for the often-anonymous people on the street or in shelters.

But many professionals who work with these populations on a daily basis find the term offensive and misleading.

“People shouldn’t be defined by their housing status,” said Jeff Kositsky, director of the city’s newDepartment of Homelessness and Supportive Housing. “We don’t walk around and call people ‘the opulently housed,’ so I don’t think we should be calling people ‘the homeless.’”

In an effort to increase media awareness and sensitivity, the Renaissance Journalism Center and the  Community and Media Lab at San Francisco State University organized a June 10 briefing on homelessness in the Bay Area. Local journalists heard from 21 panelists with years of experience in a variety of fields including affordable housing and public health. Kositsky, who was five days into his new job, was invited to speak on behalf of Mayor Ed Lee.

The session, held at the Mechanics’ Institute in the Financial District, was a precursor to the June 29 blitz of homelessness coverage in the Bay Area by more than 50 local and national news organizations to call attention to the increasingly visible crisis.

The panel stressed the importance of providing readers, viewers and listeners with enough historical context, recognizing the complexities of the issues and explaining programs in depth, not just citing their successes or failures.

Reporters should “give respect to the issue at hand by contextualizing the problem, describing its complexity and history, not just a story of cynical caricatures,” said Martha Ryan, executive director of the Homeless Prenatal Program.

Even among federal agencies, there are multiple definitions of homelessness. But even so, not everyone who needs stable housing can be categorized.

For example, quasi-homeless immigrant families who live out of their cars, or in make-shift housing units usually in the back of garages and yards: “How are they factored into the overall homeless population?” asked Sonny Le, an instructor for the Non-Profit Management program at San Francisco State.

The panel also emphasized the need for readers to “empathize with, rather than exoticize” those who lack stable housing.

“This is us, it’s us!” said Damon Francis, interim medical director of Alameda County Health Care for the Homeless. “We should be asking, ‘what happened to you?’ not ‘what’s wrong with you?’”

2. Shed light on those who are ‘invisible’

Homeless families and youth are invisible to government agencies, according to Ryan. Mothers often do not report their status out of fear that their children will be taken away.

For families, “Housing is key, but services matter,” Ryan said.

While poverty is often a major contributor, many homeless families wind up on the streets to escape violent situations at home.

“Domestic violence is a huge cause of family homelessness,” she said.

Matt Bartek, program manager of Haight Street Referral Center, said homeless youth under the age of 18 do not reveal their true ages because they are afraid they will be placed back with their parents or the state institutions they fled from.

Many youth that come through the outreach center on Haight Street for housing, food, and job assistance frequently wait in limbo until they turn 18 and become eligible for housing programs.

By the time many of the youth Bartek works with apply for housing programs (Bartek said the wait can be anywhere from three to six years), they have incurred too many citations from the strong enforcement of sit-lie laws in the Haight to be eligible for many of the options. This contributes to the cycle of homelessness, he said.

3. Explain why a racial disparity exists

Thirty-six percent of those who are homeless are black, while they make up only 7 percent of the overall population, according to the San Francisco Homeless Count Report in 2015.

But why such a disparity?

Black families struggled to accumulate wealth during the 20th century amid racist banking policies, exclusionary zoning rules and workplace discrimination. During the post-war housing boom of the 1950s, black families could not receive government subsidies to buy a home. More likely to lack intergenerational wealth, African-Americans have a harder time paying for housing.

And systemic racism continues to haunt the streets. Recent studies from the book Evicted showed that black applicants are less likely to receive offers of affordable-housing offers than white applicants with worse credentials.

“This is where racism hits the road,” Kushel said.

Historical context is what reporters habitually skim over in a rush to identify the newest problem. But homelessness as we know it today is a relatively new phenomenon, said Stacy Murphy, a research director at California Housing Partnership Corporation. This partnership aims to increase the number of affordable housing units statewide.

From 1980 to 2005, the United States lost 4.5 million manufacturing jobs. As blue-collar jobs were exported overseas, it produced a deep economic vulnerability among working-class Americans. Simultaneous welfare cuts by the Reagan administration in the 1980s allowed many to slip from the middle class onto the streets. In California, 23 out of 100 families living below the poverty line have access to welfare, Murphy said, and affordable housing has declined 66.5 percent since 2008, the beginning of the Great Recession.

“While Reagan’s welfare cuts exacerbated the issue, the housing crisis was created primarily by federal and state retreats from investments in affordable housing that has been going on since Jimmy Carter was in the White House,” Kositsky said. “People like to blame Ronald Reagan, but it actually started in the late ’70s, before Reagan took office.”

“Every story should include the information from the first 15 minutes of Stacy Murphy’s presentation,” Francis said.

San Francisco has a history of laws criminalizing homelessness. From the 1981 ban on sleeping in parks to the sit-lie law enacted in 2010, panelists said the city’s big-stick policies have failed to address the problem.

This policy of criminalization continues to trap people in the “cycle of homelessness,” Bartek said.

In San Francisco, 90 percent of citations go unpaid, resulting in a warrant. Multiple warrants lead to jail time and a criminal record. This makes it difficult to find a job and save money for permanent housing.

“Police citations perpetuate homelessness,” said Chris Herring, a doctoral candidate at the University of California-Berkeley focusing on the causes of poverty and homelessness in U.S. cities.

One study, from UC-Berkeley, revealed that San Francisco has the most vagrancy laws among the 58 most populated cities in California. The San Francisco Police Department has 23 officers employed full-time to enforce the city’s sit-lie laws and “shuffle homeless people around,” said Herring. In about 90 percent of the cases, “people remained in public spaces, around the corner or across the street.”

Though Kositsky from the mayor’s office agreed that arresting homeless people and “just moving them around” was not a “common sense” solution, he said the same of allowing people to build shelters on the sidewalks.

“Saying it’s OK for people to have encampments in the street — that we should just allow that to be the new normal — that’s not common sense,” he said. “The citizens of the city who are housed are not going to tolerate this to go on indefinitely.”

Mental illness can be both the cause and the result of homelessness.

In 1963, the Community Mental Health Act replaced public psychiatric institutions with community-based service providers. But many communities were not prepared for the influx of patients and following the Reagan administration’s welfare cuts in the 1981, most lacked the funding and the infrastructure to provide adequate care.

According to the 2015 city report on homelessness, 35 percent of those living on the streets suffer from psychiatric and emotional conditions.

“The mentally impaired and disabled should be the responsibility of the federal government,” said Dr. Joshua Bamberger, a clinical professor in the Department of Family Medicine at UCSF who has also worked for the San Francisco Department of Public Health since 1991.

Displacement can also exacerbate mental illness. For the chronically homeless — or anyone who has lived on the streets for more than a year according to one federal definition — the numbers are even higher, at 55 percent.

“Homelessness is devastating to health,” said Kushel of UCSF. “Chronic diseases are difficult to care for when people are homeless. How can you keep your insulin in a refrigerator, plug your sleep-apnea machine into the wall, when you’re homeless?”

She added that with or without contributing health issues, people who live on the streets age much faster than those with a roof over their heads.

Along with premature aging, homeless people also have a much shorter life expectancy.

“People are dying on the streets, and they’re dying quickly,” said Kushel, adding that it doesn’t matter whether they have been on the streets for three years or 30.

8. Focus on solutions, not just problems

The media were criticized for being too cynical in their coverage of local responses to homelessness.

“Another news article that just says, ‘They’re not doing enough,’ is so defeatist,” said Francis.

Instead of focusing on what’s not working, journalists should ask what is working and how it could be scaled up — what the Solutions Journalism Network refers to as “positive deviants.”

“Exposing the problem isn’t always enough. People and society need ways to respond,” said Rikha Sharma Rani, a freelance writer and a director at the Solutions Journalism Network. “The key question to ask should be, ‘Who’s doing this better? And how?’”

Solutions-based reporting sets benchmarks for what is and is not possible to hold people accountable for solving the problem to the best of their capabilities. One example cited was Tina Rosenberg’s article on how health care laws in Brazil made H.I.V. medications the most accessible and affordable in the world.

“This is not advocacy,” Rani said. “It takes away the excuse for nonperformance.

Hye-Jin Kim is an editorial intern for the Public Press. She is an anthropology major at Middlebury College and a features editor for The Middlebury Campus. She has also reported for the West Windsor-Plainsboro News in New Jersey.