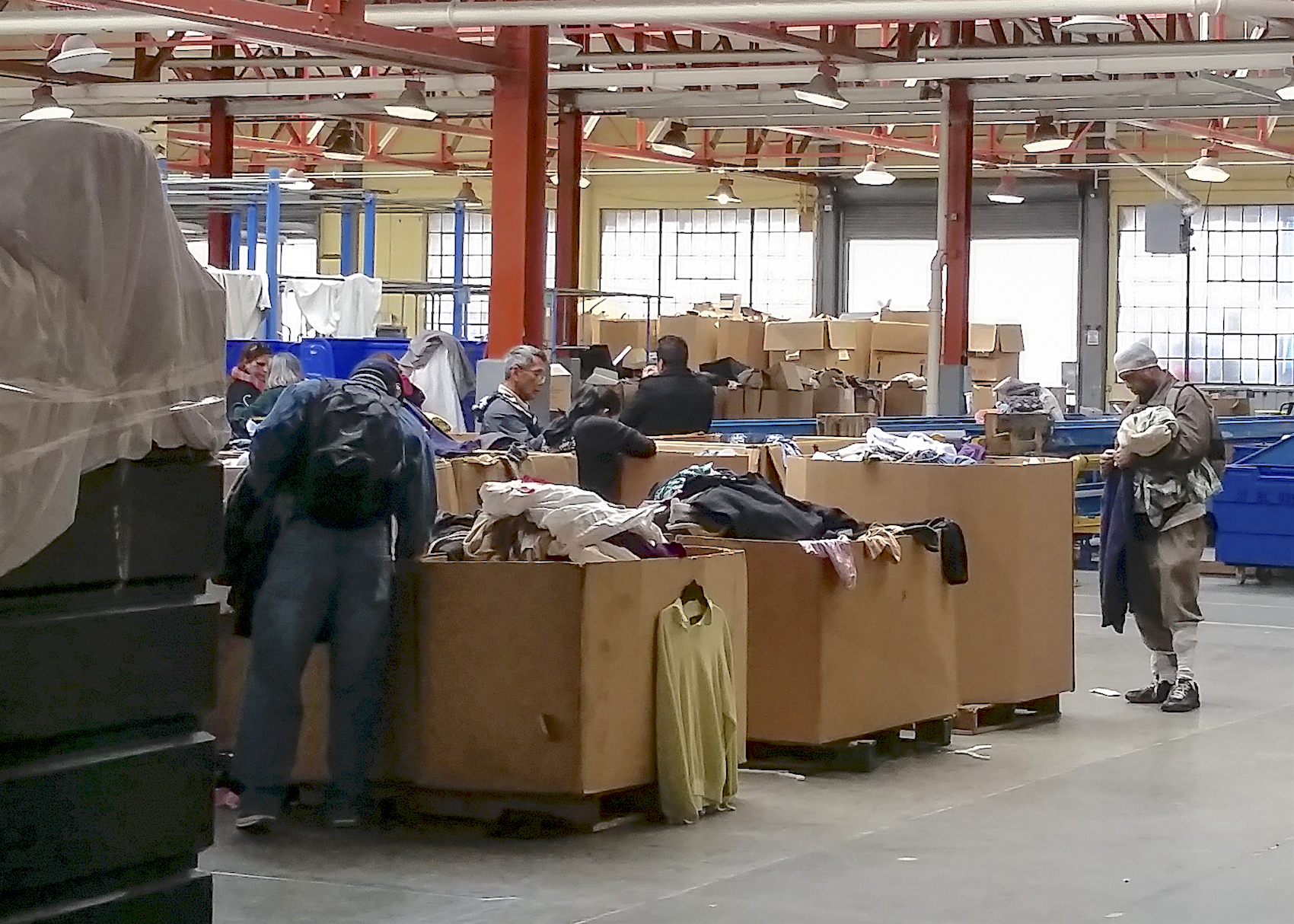 The Goodwill’s “As-Is” warehouse on Mission Street was the only place in San Francisco to buy used goods by weight, and was a key resource for low-income and homeless residents. Photo by Noah Arroyo / San Francisco Public Press

CLARIFICATION (7/5/2016): The Goodwill Flagship store was comprised of two retail stores (the main storefront and the As-Is outlet), corporate offices and classrooms for job training services. The As-Is store closed on June 30. The rest of the flagship’s operations are in the process of closing, likely by the end of this year, according to the redevelopment timeline.

Goodwill’s flagship store at 1500 Mission St. was a lifeline for Tony Bones.

He was not a customer or an employee. Neither was he enrolled in the job-training program. Yet for the past year, Bones, 48, spent most weekday mornings at the Goodwill headquarters, by the As-Is warehouse.

Outside the store, he scavenged for second-hand goods to run his own sidewalk thrift shop. Some of his latest finds: an extra-large fan, a questionably working microwave, a pocket knife.

The additional income kept him out of jail.

“I was a petty thief all my life. If I steal one more time, I’m done for,” Bones said. “But I don’t have to steal here.”

Though not through eviction like many San Francisco residents, Bones’ life is being upended by the city’s housing crisis and the soaring value of real estate.

On June 30, Goodwill’s As-Is store will shut its doors for good. The operation is being consolidated with the charity’s smaller location in Burlingame, 15 miles south and a car ride away.

Its closing is the first visible sign of redevelopment, first proposed in 2014, on this block located at the confluence of three main streets: Mission, Market, and South Van Ness. It is the beginning of a process that will dismantle an ecosystem of services this Goodwill store once provided, either directly or indirectly, to the city’s low-income and homeless populations.

Flagship was a resource hub

Tucked behind the main Goodwill storefront, the As-Is store is the only place in San Francisco to buy used goods by weight. It is also one of the largest warehouses of its kind in the Bay area. Thrift vendors from as far as Fresno drive up weekly to restock their stores, buying and sorting through five, 10, sometimes 20 blue bins brimming with donated goods.

Vendors park their vans or moving trucks alongside the store’s entrance on 11th Street. Rummaging through a variety of items from shoes to computer cables, they carefully load what could be resold into their vehicles. Everything else gets chucked back into the bins as trash.

People mill about, picking through the piles of rejected goods. Some are homeless, many are not, and all are interested in free stuff. Most collect items for personal use, but there are a few, like Bones, who scavenge to sell on the streets.

In addition to retail, the flagship location contains a warehouse, administrative offices, and classrooms. A vital resource hub for low-income or unemployed individuals, the building is a one-stop shop for job training, employment and discount goods.

Its location at the city’s center also makes it the most accessible via public transit. Three main streets intersect around the site, and within a block are four Muni stops for 16 different bus and rail routes. From the 1880s through the 1950s, the golden era of streetcars, the area was known as “the Hub.”

The Goodwill site is located in the rapidly developing Market-Octavia area, near the Mid-Market neighborhood. Two high rises — a 39-story building of apartments and retail space and a 17-story office building — will replace it.

“Market-Octavia is supposed to be a residential district,” said Maia Small, an architect in the Planning Department. She said the block has the potential to be densely populated because of its proximity to Market Street and multiple transit routes.

Unlike other nonprofits forced out of the city by rising rents, Goodwill owned the property at 1500 Mission St. In 2014, Goodwill sold the property to Related California for $65 million. To help the firm finance the redevelopment, the Mayor’s Office of Housing and Community Development applied for a $375 million tax-exempt bond from the state.

“Instead of paying a construction loan, they have tax-exempt debt,” said Kate Hartley, the office’s deputy director. She added that such state bonds are issued “all the time.” The city will receive $937,500 from Related California, or a quarter of a percent of the bond’s total value for securing the funding.

To qualify for these bonds, the developer’s plan just meets the affordable-housing requirement: 20 percent.

The project includes 112 below-market-rate apartments, though the passage of Proposition C last year might up this number to 120, offering low- and middle-income families some relief from the highest rents in the country. The remaining 448 luxury apartments will be market-rate.

In deliberations weighing the possible costs and benefits of the Goodwill site’s redevelopment to the low-income community, Hartley said her office “has no authority over the entitlements for that site.”

For shoppers who frequent the flagship store on a regular basis, the proposed housing development does not outweigh the loss of Goodwill’s biggest retail complex, especially the As-Is warehouse. In 2009, during the depths of the recession, the outlet saw a 38 percent increase in revenue, while nationwide sales dropped 6.5 percent nationwide.

“This is the one they should keep. They’ve got the warehouse,” said 60-year-old Little Eddy, who did not want to give his last name. He has been coming here since the flagship first opened.

“I don’t think it’s good that they’re moving the store. It’s going to hurt the city’s poorest,” said Marcel Alley, the As-Is store’s assistant manager. He will keep his managerial position at the new store. “And Burlingame is not like this. I heard it’s kind of a nice town, not a lot of poor people.”

The poverty rate in the San Mateo County suburb is 6.4 percent, compared with 13.3 percent in San Francisco. Considering that the city’s population is nearly 30 times greater than Burlingame’s, the difference between the number of low-income residents, people who could benefit most from Goodwill’s discount outlet, is staggering.

Alley said around 50 to 70 people visit his store each day. At least eight thrift vendors, sometimes as many as 15, show up weekday mornings to purchase bulk bins.

Furthermore, 40 percent of the people who benefit from its employment services are “homeless,” according to the SF Goodwill’s annual report. The number of unhoused people in San Francisco is nearly five times the number in the entire county of San Mateo. Of the 7,539 San Franciscans without stable homes, more than half live in District 6, where the flagship store was located.

A long trip to Burlingame

For thrift vendors, the drive to Burlingame will take an additional 20 or 30 minutes, depending on traffic. But for Bones and others without a car, the commute on BART train will take close to an hour, including a walk of more than a mile.

Unlike Muni, BART does not offer discounts to low-income passengers. From San Francisco to Burlingame, the cheapest round-trip ticket is $9.30.

“It’s not going to stop me from going there. It’s what’s keeping me alive,” said Bones. He plans to lug items in a garbage can back to San Francisco.

That may be easier said than done. Though current BART rules ban only motorized vehicles, a customer service representative said there would likely be no space for something “the size of a garbage can” during peak commute hours.

Most of the bulk sales occur around 9 a.m., when the warehouse opens, Alley said.

Others said they would be affected by the store’s relocation, and would be unlikely to make frequent trips.

“Well, where am I supposed to go ‘shopping’ now?” said Jenny Nguyen, as she neatly packed her finds into a suitcase. Everything, including the luggage, was recently salvaged from a nearby bin.

City to build a ‘one-stop shop’

Goodwill’s one-stop shop will undergo a fragmented relocation. The corporate offices and employment services will move to the Marina District, donation storage and distribution to South San Francisco and the outlet store to Burlingame.

The property’s new owner, Related California, will demolish the Goodwill site next year for another kind of one-stop shop.

“This will be a one-stop permitting shop,” said John Updike, the city’s Director of Real Estate. The city has an agreement with Related California to buy the new office building for a tentative $328 million upon completion in 2019. Currently scattered in three different locations around Civic Center, the city’s planning, building and public works departments will finally be housed under one roof.

“We did have a discussion with Goodwill. We didn’t want to be displacing them. But they put the property on the market — they made this decision first, Updike said. They made the call here, that they are sitting on under-utilized property.” Goodwill’s two-story flagship store is on a block zoned for high-rise construction.

For $16 million, their new building on Bay Street is “a really amazing asset, said William Rogers, interim CEO at the Goodwill of San Francisco, San Mateo and Marin. He said it would work with neighboring businesses to provide job opportunities beyond its retail or warehouse operations. Goodwill will operate a new center for workforce services offering training, interviews and resume-writing guidance. Tech classes are also in the works.

With the $40 million profit from its relocation, Rogers explained, Goodwill created an investment portfolio “for the next 100 years.”

“This is sort of an endowment,” he said. “We make about 80 percent of what we need to operate. This helps us tremendously. It is fundamentally about the future. It means we have a little flexibility in terms of serving folks with barriers to employment.”

Hye-Jin Kim is an editorial intern for the Public Press. She is an anthropology major at Middlebury College and a features editor for The Middlebury Campus. She has also reported for the West Windsor-Plainsboro News in New Jersey.