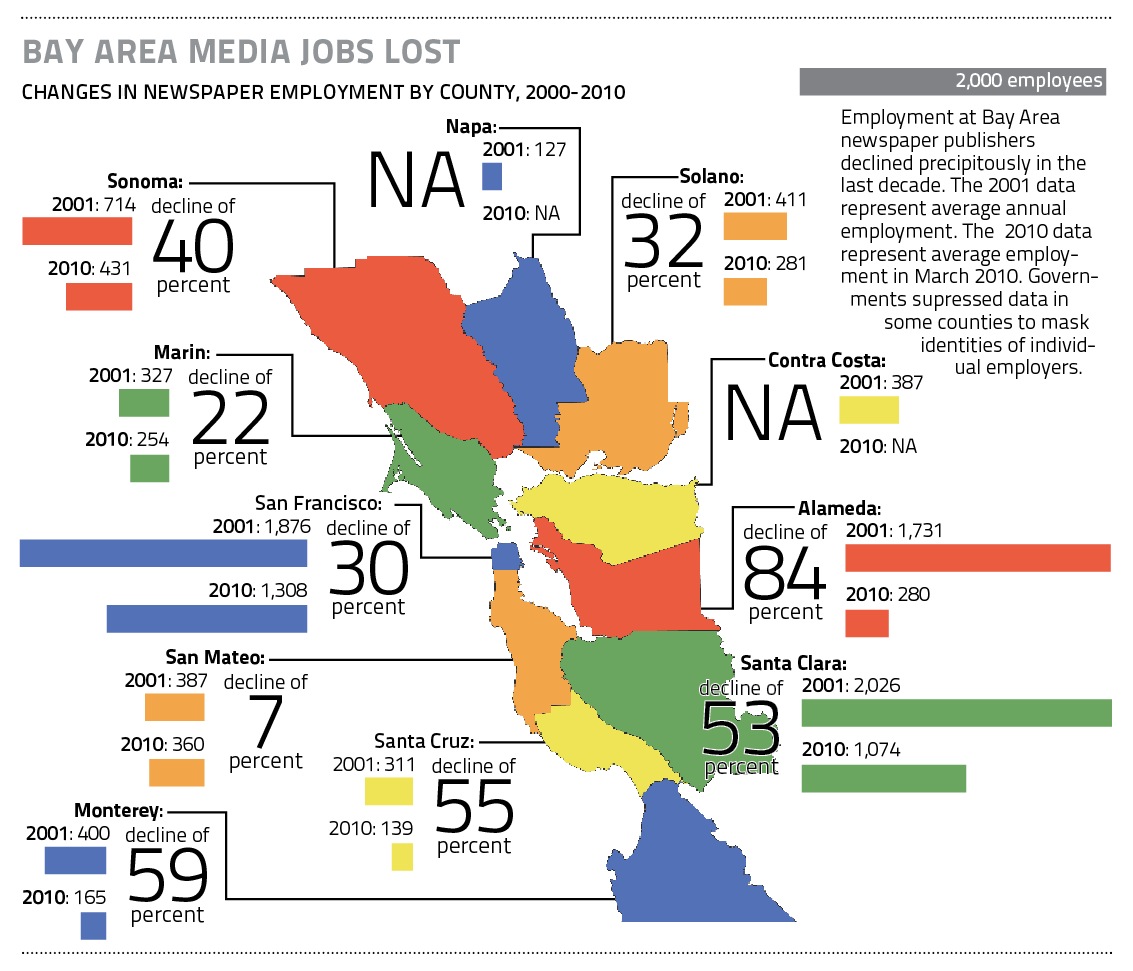 State and federal labor statistics show that employment among Bay Area media workers fell 43 percent since 2001, a result of massive restructuring at local news outlets whose financial losses measured in the billions of dollars.
Newspapers were hit the hardest, shedding upwards of 4,000 employees. As dozens of papers merged in an effort to cut costs, reporters who used to compete for scoops found their jobs redundant.
While employment appears to have risen in the television and radio sector over all, journalists among them did not fare so well, state employment data suggest.
A detailed study of local journalist employment, released in April by the North Valley Job Training Consortium, or NOVA, found that both California and Bay Area newspapers fared worse than those in other regions of the country. Statistics from the state Employment Development Department and the federal Department of Labor show the region’s papers shed nearly half their employees. Nationally, 36 percent of newspaper jobs disappeared.
The two leading newspapers in the region are certainly much diminished. The combined newsroom staffs of the San Francisco Chronicle and San Jose Mercury News have shrunk to fewer than 300, after peaking in the year 2000 at more than 1,000 workers. Much of that was an inevitable result of advertisers and readers migrating online.
Internet-only companies, which represent the fastest-growing sector for news reporting, did not show up in the tally due to incomplete data in some counties and job categories evolving during the study period.
Early this year NOVA hired Roger Dale of the Natelson Dale Group, in collaboration with the Public Press, to produce an online survey of more than 700 current and former Bay Area journalists who have worked in newspapers, magazines, television and radio, as well as online-only news. Though the sample did not necessarily represent all facets of the industry, some clear trends emerged.
Layoffs and buyouts peaked in 2008, touching most local newsrooms. Of workers surveyed, 44 percent had experienced job dislocations since January 2000. About one-third of those who answered the question said they were either unemployed or underemployed for more than a year.
Anonymous survey respondents expressed overwhelming disillusionment. Many considered local reporting a public service, but weren’t able to make ends meet doing it.
“Many journalists, even mid-career, are faced with low-pay employment options, even as the opportunities to make your mark are enormous,” one journalist wrote. “This puts tremendous pressure on individuals to survive in a very expensive area of the country.”
About half those surveyed said they had managed to hang onto journalism jobs. Another 20 percent were working as freelance or contract journalists. And 14 percent were employed in other fields. The rest were either unemployed or retired.
While about 70 percent had tried freelancing, one media executive said most are “not really making it” financially. The job market is flooded with experienced journalists as well as young people struggling to break in.
Many online startups offer opportunity to do significant journalism but for little pay.
Yet optimism about reinventing the news in the digital age was a consistent theme: 39 percent of respondents said they had done unpaid work for a nonprofit or for-profit journalism project, or helped to start a new media enterprise — though it may be that the optimists were more likely to answer a survey about the future of journalism.
Many survey respondents bemoaned the demise of investigative reporting. So-called citizen journalism, the report noted, “may work well for restaurant and movie reviews, but independent journalists simply do not have the resources needed to conduct genuine investigative reporting.” Some respondents said the deprofessionalization of local news represented a “threat to democracy.”
A handful of well-funded nonprofit news organizations have sprung up to fill the investigative reporting niche. These include ProPublica, InvestigateWest and Berkeley-based Center for Investigative Reporting, which syndicate complex stories to other news outlets now lacking the ability to do it themselves.
Some media executives and other leaders who participated in the study recommended that displaced journalists begin to seek new careers. Many said that the lost jobs will not return.
Most journalists are well educated, they said, and can transition into other occupations, including government, technology, corporate management and public relations. Even those who manage to hang on doing news, they said, need to learn entrepreneurship and marketing to become “one-person media centers.”
Of the 700 surveyed journalists, only two-fifths said they were “employed as much as they wanted” in the past 10 years.
In search of a silver lining amid the economic crisis and pessimism in the trade, the report proposes a “journalist repositioning initiative” to provide retraining and career advice.
“Here’s a group of workers who, if properly utilized, can continue to contribute to the local economy,” said Luther Jackson, NOVA’s economic stimulus director. “But a lot of things have to be done to transfer those journalistic skills and domain expertise to other sectors of the economy.”
Jackson said the region should respond by helping all displaced workers, adding that journalists were not in a privileged position.
“We have a lot of job seekers who have master’s, Ph.D.s” seeking help from NOVA, he said. “At least 60 percent have bachelor’s. You have people who have followed all the rules, gone to great colleges, who developed a specific expertise and then all of a sudden, the technology changes. And that skill is now not valued in the marketplace and these folks are out of work. Today, that’s the way the economy is.”
The report is “a wake-up call,” said Jon Funabiki, who plans to use its findings in journalism classes he teaches at San Francisco State University.
“We’ve trained students for jobs that existed yesterday,” he said. “Now we need to train them for jobs that don’t yet exist.”
But Funabiki, also director of the university’s Renaissance Journalism Center, insisted job training was less important than preserving the public-service work of journalists: “The core issue is, how do you get news and information to the public?”

This story appeared as part of the Public Press' Spring print edition media package of stories.