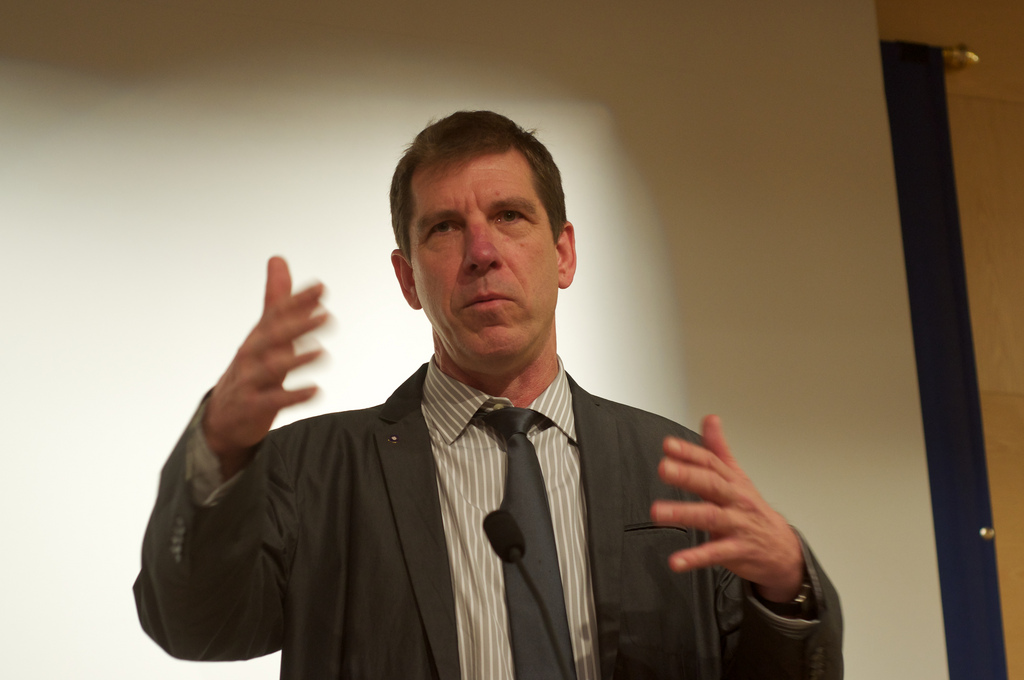 Carl Hall, executive officer of the Pacific Media Workers Guild, said that despite layoffs and buyouts, newspapers are still vital to the Bay Area. Photo by Steve Rhodes/SF Public Press

Former San Francisco Chronicle science writer and union activist Carl Hall took a buyout from the newspaper in 2009. He is now executive officer of the Pacific Media Workers Guild, which represents union newsroom workers at Bay Area newspapers. He talked about changes in the Bay Area’s print news landscape and the future of unionized journalism.

Q: Can you give us a basic outline of the scope of major layoffs in the Bay Area’s newspaper industry?
The Bay Area News Group has been pretty aggressively consolidating. Copyediting has been consolidated in Walnut Creek from all those papers, including the South Bay and East Bay papers.
The Chronicle has gone from an artificial high … of about 560 editorial workers. That was mostly a result of a no-layoff agreement that we got with the Hearst corporation merger. So that was a little high, and something we all expected to come down. We now have something like 130* editorial staff at the Chronicle. I would say that the ratio is along those lines all over the place.

Q: About a 75 percent drop off then?
Yeah, 50 percent or better. I know your next question, though: What has happened to fill the gap? Partly because of concessions agreements we have made with these publishers to allow them to use freelance nonstaff content to an extent never anticipated in the past, there is a long list of Chronicle editorial staff that took buyouts or quit or something, who continue to show up in the paper. That is one of the reasons that the Chronicle can still put out a pretty good product with only 135* or so editorial employees.

Q: How have they managed to keep up running the paper at that kind of skeleton crew level?
I wouldn’t accept that characterization. In fact, I object to that when people do that. It’s hardly a skeleton staff. And they are working like crazy. The core staff, that is, the people drawing a paycheck and getting a W2 — an employee — those people are fewer now. That is for sure. But it is still a productive and large staff compared to anyone else.
Q: So has the Chronicle retained its ability to serve as a watchdog organization in the Bay Area?
Well, it is certainly greatly diminished. It is an outrage that journalism has been gutted the way it has been in this country. I’m just saying that it is a more complicated picture than … when people start portraying the Chronicle as having a skeleton staff.
This market is fragmented where you have the Chronicle, who is surrounded by a fairly large competitor in the Bay Area News Group. In a lot of places you would not have that — you would just have one combined news operation, and it would have more people working for it.

Q: Is that a testimony to the relative health of the news media here, that we still have more than one major daily in the area?

Well, I think there is some competition here.  There are two big players in the metropolitan area here and I’m not sure that is true in most markets any more. So if you look at the Chronicle separately, it’s probably going to look smaller compared to the top 10 or 20 newspapers in the nation

Q: What degree of influence do you feel the Guild has on working conditions and worker compensation?
Well, we still have a contract we were able to reach with all these publishers. We are proud to say we remain a force to be reckoned with in the newspaper business.
One of the main changes that we had to do is to stop trying to stiff-arm freelancers, but to organize freelancers, and that’s what we are starting to do. We have taken on Arianna Huffington. And to advocate for better pay and better conditions for freelancers.
It is a much more productive approach that is much more in tune with the times, instead of trying to hold back the tide — and that is a fundamental shift. We have not yet achieved our goals for freelance organizing. We have just started, really.

We have to evolve into a Hollywood studio system. They work on projects for a time.  Maybe six months or six weeks they are working for a particular publisher and then they go to someone else. But they get their health benefits and other benefits through the union. We are just starting with this and we are not there yet.

Yeah, that (printers) union has a very long history, back into the 1800s. That is pretty much history now. We are not going to weep about it — it’s over. Photo engraving? Well, there is Photoshop now. I think, eventually, why are people even printing newspapers? I can see publications printing special products. Some people will still prefer a print newspaper. I still subscribe to all these things, I don’t know why really, but I do. I like to have the print edition but it seems a little old fashioned. Doesn’t it?

CORRECTION 5/25/11: Chronicle management noted, and the union confirmed, that while the number of union members on the editorial staff of the Chronicle is approximately 130, the total number of editorial staffers at the paper, including managers not represented by the union, is 165.

A shorter version of this story appeared as part of the Public Press’ spring print edition media package of stories.