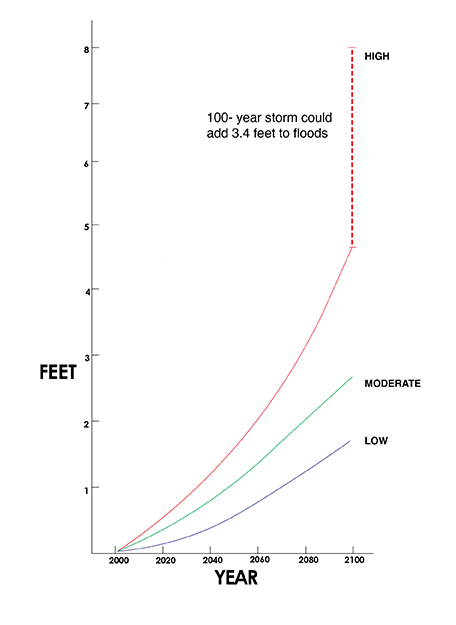 Why 8 feet is an unlikely but worrisome possibility

Many objections to preparing aggressively for sea level rise center on the uncertainty in projections about how quickly global warming will cause the oceans to expand. But the science is increasingly clear.

Most of the models also have an upper range, defined in terms of statistically less probable events or as a worst-­case scenario in which the world continues its business­ as ­usual growth in greenhouse gas pollution. Under several predictions, the seas would rise about 4.6 feet by 2100.

But it could get worse: Add 3.4 feet of surge during a “100 ­year storm” — severe weather with a 1 percent chance of happening in any year — and the total rise could hit 8 feet during such an event. No one knows how likely that is, but there is reason to be pessimistic. Sea level rise so far has tracked the upper bound of past projections, according to observations in recent years.

Downward shifts in land elevations due to earthquakes or depletion of aquifers by cities and farms facing drought could make that flooding even worse. The National Research Council predicts that this subsidence could depress land height by an average of 6 to 11 inches by 2100 along the California coast south of Cape Mendocino. This would effectively raise the total upper- range flood scenario by a similar amount.

Moreover, sea rise is likely to accelerate this century and after 2100 — in part due to disintegration of the West Antarctic ice sheet, which scientists reported last year will eventually add at least 10 feet of water to the global ocean. As climate change makes our weather overall more violent, it becomes increasingly difficult to define a “100­ year flood.”

In his book, “High Tide on Main Street: Rising Sea Level and the Coming Coastal Crisis,” oceanographer John Englander noted that if all the land ice on Earth melted, seas would rise more than 200 feet. That would transform the San Francisco Peninsula into an archipelago.

San Francisco officials have so far reacted with caution. But residents may take heart from one bit of advice enshrined in the city’s Environment Code in 2003 requiring city departments to act — and approve new developments — based on the “least environmentally harmful alternatives,” considering “both immediate and long­-term consequences.”

“Where threats of serious or irreversible damage to people or nature exist,” the ordinance states, “lack of full scientific certainty about cause and effect shall not be viewed as sufficient reason for the City to postpone cost effective measures to prevent the degradation of the environment or protect the health of its citizens. Any gaps in scientific data uncovered by the examination of alternatives will provide a guidepost for future research, but will not prevent the City from taking protective action.”

Our Coast Our Future