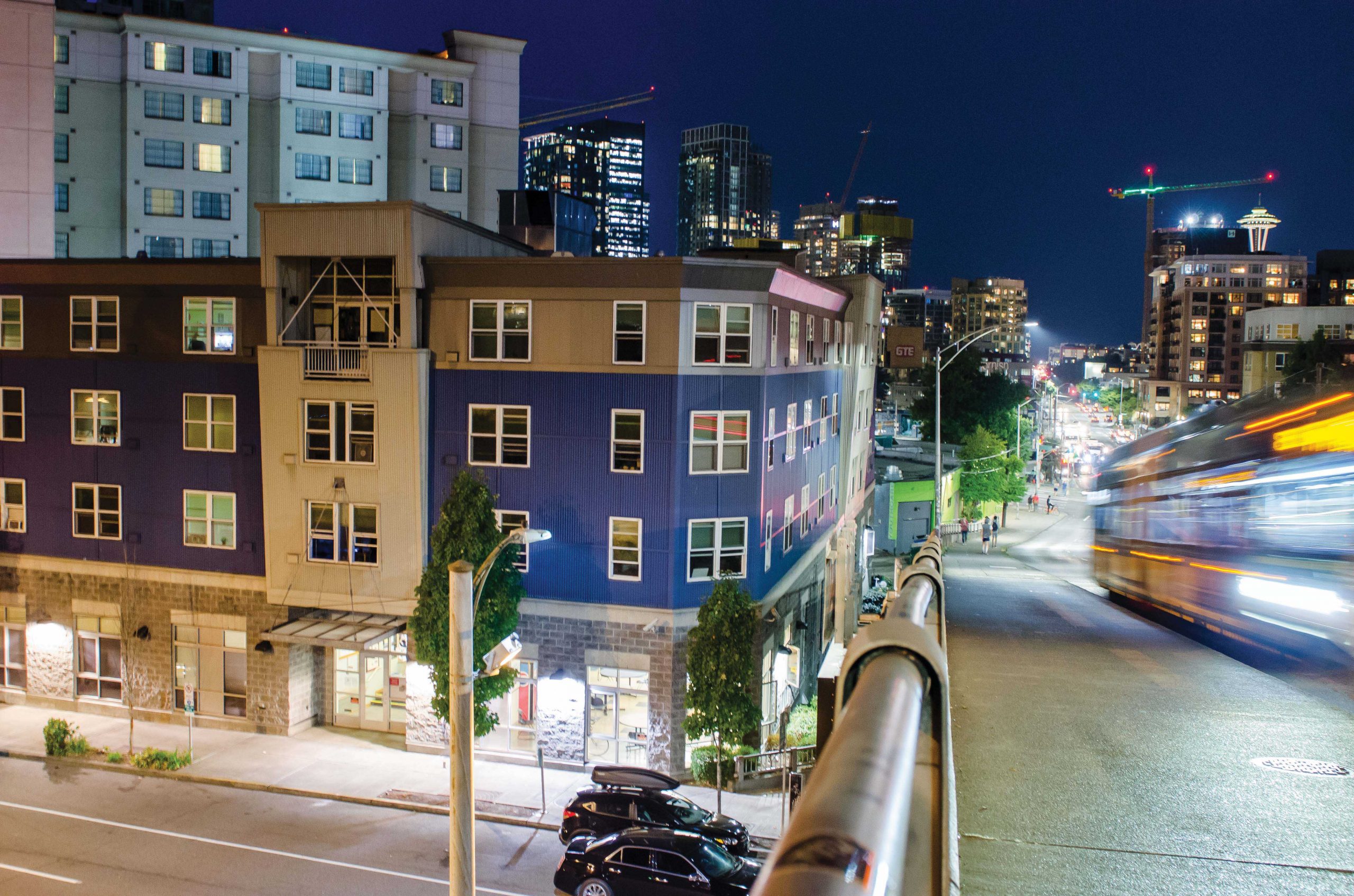 More than five years ago, San Francisco Mayor Ed Lee visited Seattle and toured 1811 Eastlake, a national model of what is sometimes known as “wet housing”: supervised facilities that let chronically homeless alcoholics drink on the premises. Studies have found that the project, which houses 75 people, helps keep alcoholics off the streets and out of jails and emergency rooms, and even helps them drink less.

It is “permanent housing, not transitional,” said Greg Jensen, who works with Seattle’s Downtown Emergency Service Center, which opened 1811 Eastlake in 2005. “Homeless people living with addiction problems move in and stay as long as they need or want.”

That promise of unconditional “housing first” allows residents to stabilize. A 2013 study found that only 23 percent of residents returned to the streets during the two years after they moved into 1811 Eastlake.

“It didn’t matter how much a person was drinking; they were able to retain housing,” said study author Susan Collins, a clinical psychologist and assistant research professor in the Department of Psychiatry and Behavioral Sciences at the University of Washington. “And this was a group of folks for whom a lot of people, experts even, said they just couldn’t, they would burn through housing. … And we found that to be patently not true.”

Collins’ research also found that the average alcohol consumption of residents shrank between 7 percent and 8 percent every three months; on their heaviest drinking days, they consumed an average of 26 drinks instead of 40.

Although that still might sound like a lot of liquor, it translates into a major reduction in the use of emergency and other public services and their attendant costs, more than $4,000 less per person every month, according to a 2009 study in the Journal of the American Medical Association. Annually, the average cost per person dropped dramatically, from $86,000 to just over $13,000.

Other Cities Ahead of S.F.

So why hasn’t San Francisco gotten on board?

“From a financial standpoint and a human standpoint, it’s absolutely the right way to go,” said Bevan Dufty, a former San Francisco supervisor who later ran the city-funded HOPE SF, or Housing Opportunity, Partnerships and Engagement. Dufty brought Lee to the Seattle facility hoping a similar project could be created in San Francisco.

“Shelters have kind of been the same way they are for over 100 years, said Dufty, now a BART board member. “The city really should be much more of a change agent in how we offer services.”

“We were ahead of the game as far as harm reduction, and reducing the rules and discipline within our permanent housing so that people that are in addiction crisis can get housing and succeed,” said Sam Dodge, deputy director of San Francisco’s Department of Homelessness and Supportive Housing.

But other communities have “gone much further” with housing that permits alcohol use onsite, he added.

The Oaks homeless shelter in Ottawa, Ontario, supplies and distributes doses of alcohol like medication. At Dann’s House, in Traverse City, Michigan, staffers go on a beer run every morning, but the residents pay for their own.

See: For Residents at Dann’s House, ‘It Feels Like Home’

The concept — derisively called “bunks for drunks” — was a tough sell in Seattle. Robb Anderson, whose trophy shop is down the block from 1811 Eastlake, told the Los Angeles Times that he and his family opposed allowing alcoholics to keep drinking “on the state’s tab.” He and other local business owners unsuccessfully sued to stop the building’s construction in the early 2000s because of concerns about panhandling and petty crimes.

Most advocates also avoid the term “wet housing.” They believe it can lend credence to a misguided stigma.

“Many of us live in houses in which we are able to consume alcohol. I do. I have a liquor cabinet. I had some scotch last night. Do I live in a wet house?” said Laura Thomas, state director of the Drug Policy Alliance, a national advocacy group.

“It’s not the alcohol that’s the problem,” she said. “The problem is the social context in which people are existing.

“I can drink to excess in my home and it’s nobody’s problem except mine and my housemates’ and my spouse’s. Someone does that on the street and it’s everyone’s problem, and it becomes an expense, and police get involved, and so on,” she continued. “So it’s as much about access to housing and access to social services and economic status as it is actually about the drug use or the alcohol use itself.”

But according to Dodge, an umbrella of tolerance may be part of what is holding back the creation of a specific facility for alcoholics.

Because the city’s permanent supportive housing already operates under a harm-reduction model that welcomes chronic inebriates, “we hadn’t seen the absolute need for a sort of special carve-out program,” he said.

With 7,500 homeless on San Francisco’s streets every day, “there’s only so many units of permanent supportive housing that come available every year, so we have really had to look at other kind of services we can provide,” he added.

But alcohol and its associated problems aren’t going away, and as the city’s homeless situation reaches crisis proportions, the idea of housing for chronic alcoholics continues to resurface.

San Francisco’s 2017 homeless count and survey found that 41 percent of homeless people reported drug or alcohol abuse. And a Public Press investigation found that 68 percent of citations issued for quality-of-life crimes between 2003 and 2017 were related to public drinking and intoxication. Police officers said a small number of individuals accounted for a large portion of those citations.

As director of HOPE SF, Dufty said, he tried unsuccessfully to get 50 “wet” beds at a privately funded shelter, but the idea never panned out because administrators were worried about needing more staff.

“A facility that really would have 75 to 100 individuals would definitely have an impact. You would see a change on our streets having that many people safe and housed,” said Dufty. He added that in Seattle, “You don’t see the problems that even you see in some of our regular shelters, where there are folks that are on the street and then there are people who are dealing to those people.”

In 2016, the idea resurfaced. After pushing the Board of Supervisors to declare a public state of emergency on homelessness, then-District 9 Supervisor David Campos advocated for one of several new homeless navigation centers to allow alcohol on the premises, and another to be a “safe injection” site for intravenous drug users. Although his proposal did not specify how much the dedicated services might cost, Campos said he was convinced that “in the end something like that just pays for itself.”

But support for both concepts faltered. Instead, the city administrator was instructed to “explore the feasibility of operating a managed alcohol shelter.”

The city already has a “Sobering Center” to help divert actively intoxicated people from using ambulance and police services. As part of its $100 million plan to cut chronic homelessness in the city, the nonprofit Tipping Point Community recently donated $612,000 to expand its capacity.

But will San Francisco ever see a pilot housing program focused on chronic alcoholics?

Rachael Kagan, a spokeswoman for the city Department of Public Health, said that the concept has “promise” but that the department is not actively working on it.

The same holds true with the Department of Homelessness and Supportive Housing. “I think that we could do it,” said Dodge. But “it’s certainly not the most pressing issue that I hear from constituents and from the Board of Supervisors.”

More of a priority, he said, are San Franciscans suffering from opioid addiction and needing a safe place to inject drugs — an idea that faces legal and logistical hurdles of its own. The city has created a Safe Injection Services Task Force. But in early September, the state Senate killed a bill to establish a first-in-the-nation program that would have permitted supervised injections in San Francisco and seven other counties. As with medicinal marijuana, allowing illegal drug use on-site would still have been against federal law.

“You cannot end homelessness without doing something about substance abuse and drug addiction and alcohol addiction,” said Campos, adding that both ideas need “a champion” now that he is no longer in office.

“You really need someone on the Board of Supervisors with a vision to push it forward, because the mayor will not do anything that is new or innovative,” he said. “I don’t think it’s a silver bullet, but I think it has to be part of the answer.”

The mayor’s office did not respond to requests for comment.

Thomas said she believes that “there’s a lot of support for the idea here” and that if residents are “unhappy with seeing people passed out on their sidewalks from alcohol abuse, they should be happy that people will be housed and indoors.”

“I think the bigger problem is actually finding a building where this program can be situated, given the intense demand for supportive housing and for affordable housing,” Thomas added.

“We know that we have a really insufficient amount of affordable housing, and it’s not just for homeless people,” he said. “I think the question would be, what is the universe of people that are really so extreme in their alcohol use that they need these kind of treatments, and then how much resources are we able to put forward?”

Editor's note: Jeff Kositsky, director of San Francisco's Department of Homelessness and Supportive Housing, said after publication that the city has 74 designated beds for alcoholics, along with specialized treatment. But unlike in Seattle and Traverse City, Michigan, they are scattered across six sites citywide. Kositsky said that his former deputy, Sam Dodge, was unaware that those beds existed when he was interviewed for this article.

The Public Press determined that 62 of the beds are federally funded by the Department of Housing and Urban Development and that the eligibility rules are strict: "People have to be homeless for at least three hundred sixty five days of the last five years at the time of program entry. They can have no history of transitional permanent housing in the last five years, and were living in emergency shelter, or places not meant for human habitation." As such, the San Francisco program differs markedly from the facilities described in the article.