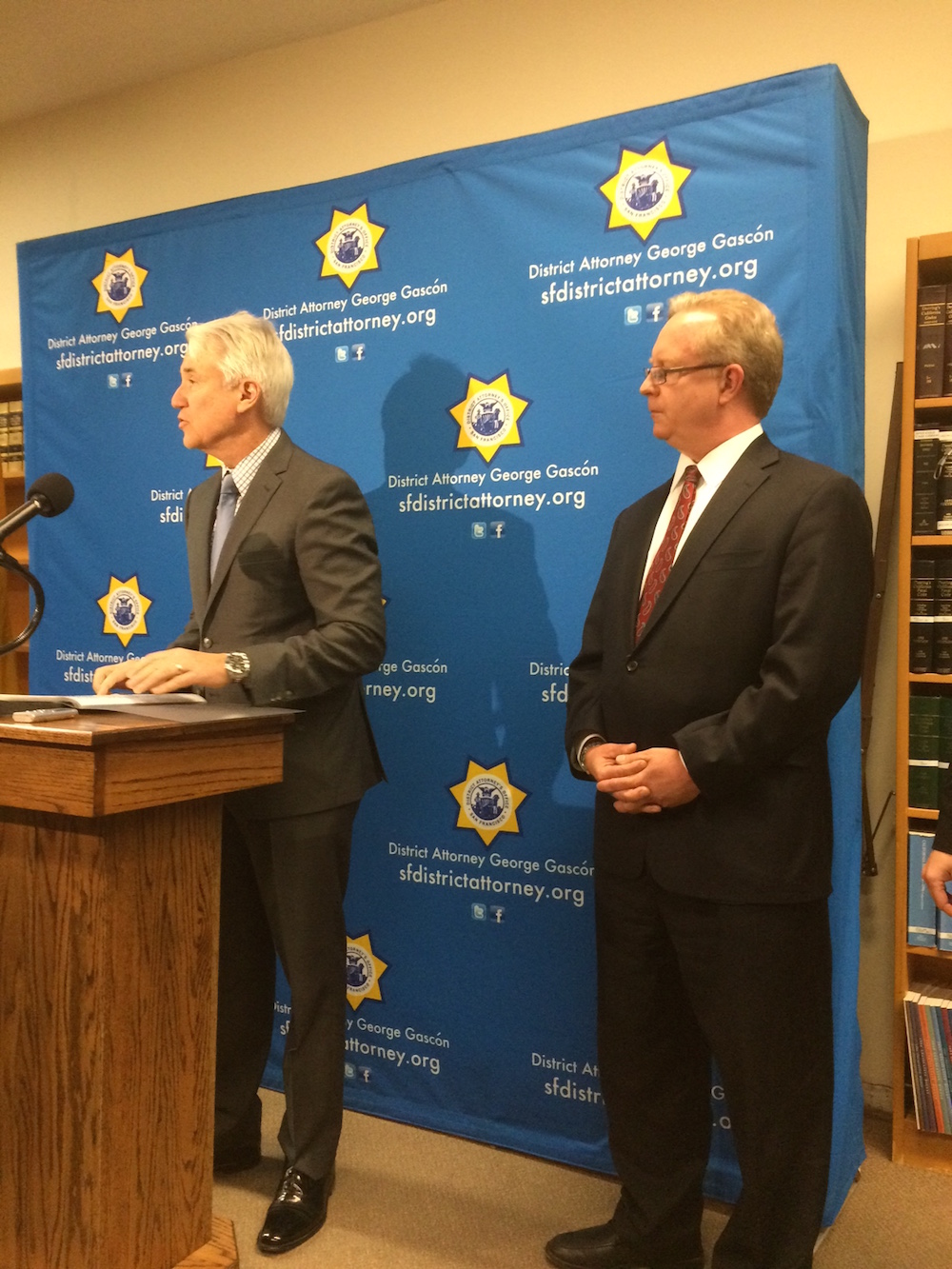 District Attorney George Gascón delivers announces that three sheriff’s deputies were served arrest warrants for on charges that they forced inmates to fight one another. Photo by Cody Wright / San Francisco Public Press

The case of three San Francisco sheriff’s deputies accused of forcing inmates to fight one another was not the first time sworn officers in California have been accused of inciting violence behind bars.

But unlike a similar incident almost 20 years ago in Southern California, when charges came down this time they singled out the officers for opprobrium without invoking the language of civil rights.

The allegations of abuses in the San Francisco jail, brought to public attention a year ago, resemble the troubling stories of “gladiator matches” that emerged from Corcoran California State Prison in 1997.

In that case, U.S. Attorneys Carl Faller and Jon Conklin launched a massive prosecution of state prison guards. Eight officers were accused of unleashing rival gang members into the prison yard and betting on the outcome. All were accused of federal civil rights violations.

But the case fell apart when the jury, which included a correctional officer from a nearby county and a jurror who had previously applied to be a state prison guard, rejected all arguments that the officers were guilty. In 2000, all eight officers were acquitted.

Gascón decried the “grossly inhumane treatment” of inmates, saying the actions of officers “undermine any efforts of rehabilitation and damage the moral authority of law enforcement.”

But Micaela Davis, an attorney for the American Civil Liberties Union, said “the individuals who were assaulted might want to bring a civil suit against the officers in the future.” While getting a prosecutor to pick up the case and file changes is one step toward accountability, she added, “unfortunately bringing a case against law enforcement is always difficult.”

On Tuesday, three San Francisco sheriff deputies were ordered to turn themselves in within two days to answer charges they coerced jailed inmates to fight each other.

Last March, San Francisco Public Defender Jeff Adachi’s office received an email from an inmate’s father saying his son had been forced to fight, and that inmates were threatened that if they refused they would be beaten, sprayed with mace or lose privileges inside the jail.

Two men who were inmates at the time, Ricardo Palakiko-Garcia and Stanley Harris, told investigators that Neu forced them on at least two occasions to assault each other, using the promise of special treatment and extra food for the winner.

In announcing the charges Tuesday, Gascón said the deputies had no justification for inciting violence. “They were forcing people to fight for their own pleasure and entertainment,” he said.

Neu, whom prosecutors described as the ringleader of the fights, was previously accused of misconduct. In 2006 he faced a civil rights lawsuit alleging that he sexually assaulted several inmates in the jail. The case was settled internally by other deputies and never made it to the district attorney’s office. Following the lawsuit, Neu was reassigned to inmate transport, but did not receive any criminal charges.

The fighting accusations only added pressure on local authorities and policy-makers to address the issue of misconduct. In November 2015, Alameda County sheriffs were caught on tape appearing to beat a man in a San Francisco alley. The next month, an unarmed San Francisco man, Mario Woods, was shot dead by police when he refused to drop a kitchen knife.

The events capped a year of nationwide tensions and public discussion about reining in abuses of power by police.

The ACLU’s Davis said following up with prosecutions shows the city’s law enforcement has taken the problem seriously: “The fact that charges are being brought against individuals is a major step to show people that accountability is starting to be seen.”

Cody Wright is a reporting intern at the Public Press. He studies journalism at San Francisco State University, where he also writes for the Golden Gate Express newspaper. He previously reported for Bay News Rising, a project of the Northern California Media Workers Guild.