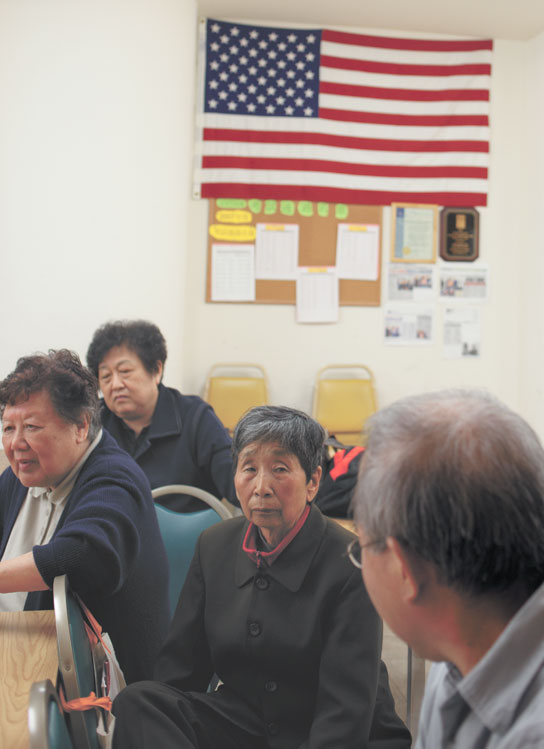 Citizenship classes taught by Joanne Lee (left) at Self-Help for the Elderly fulfill the special needs of students like Tan Zhu, Yang Hui and Nancy Zhang (right to left). The Chinatown-based agency collaborated with other immigrant-serving nonprofits to avoid deep cuts to their city funds. Photo by Monica Jensen / Public Press

Year after year, private organizations strategize and line up clients to push for last-minute ‘add-backs’

For clients at Self-Help for the Elderly, the citizenship classes taught by volunteer instructor Joanne Lee are a perfect fit: Classes are held at a convenient Chinatown location, senior clientele are easily accommodated and the material is taught in both English and Chinese.
It has worked out well for students Sammie Xu, 69, and Nancy Zhang, 64, Chinese immigrants who are studying for their naturalization exam. Before enrolling in classes at the social services agency, the married couple tried others in which teachers only provided instruction books without guidance or taught classes only in English.
But Self-Help for the Elderly was clearly on the chopping block this spring when Mayor Ed Lee’s proposed budget called for a 20 percent cut to groups providing services to older immigrants. A proposed cut of $22,000 would have forced the organization, a grantee of the Department of Human Services, to drop 150 seniors from its naturalization program and lay off two part-time instructors. Dozens of similar groups made repeated attempts over several months to fend off major cutbacks as the city grappled with hundreds of millions of dollars in deficits.
Over the past three years, the organization lost more than $100,000 in repeated rounds of city cutbacks. Groups ended up competing for supervisors’ attention with other deserving city departments and grantees.
This budget season, the agency took a more coordinated tack in voicing its objections. Anni Chung, Self-Help for the Elderly’s president and CEO, was able to meet the mayor at some of the 10 “town hall” meetings he held reaching all 11 supervisorial districts. She collaborated with other Asian-American organizations, such as Kimochi, Asian-Pacific Islander Legal Outreach, Veterans Equity Center and the Japanese Community Youth Council, to put political pressure on the supervisors to restore funds.
The coalition arranged for the organizations’ clients to show up at human services budget hearings to tell stories of how they were helped by the group. The process was smoother this time around. Chung said the coalition lobbied for three hours at various meetings this year. Last year the groups together spent about eight hours in meetings.
“Before it was like a battle,” Chung said. “This year, there was more meaningful dialogue and discussion.”
The preliminary budget is approved in late June, and tweaks are made for the next month. Since 1996, the Board of Supervisors has been able to “add back” funds for specific services after its members identify cuts in other areas.
Some organizations have identified the add-back process as particularly inefficient and prone to abuse, with nonprofits repeatedly forced to advocate for their own survival in what the San Francisco Municipal Executives’ Association deemed in a 2008 report as the most complex budget process among comparable major cities. San Francisco uniquely allows its legislative budget analyst to identify for the board where to reallocate monies.
“The focus on the San Francisco budget is on cuts and add-backs at the macro level,” the report concluded, “as opposed to thoughtful policy decisions regarding services to be provided to residents and professional management of resources at the organization-wide level.”
Self-Help for the Elderly took full advantage of this process this year, encouraging clients to approach the board directly.
Yvonne Dupuis, a 65-year-old German native who was sworn in as a citizen in February, said that even though she was savvy about the naturalization process she still needed the group’s assistance in correctly filing the citizenship application. On June 24, she told the budget and finance committee how fortunate she was in listing the agency as her creditor.
“If you do not have a creditor, you need an attorney and some people do not have the financial resources,” she said. “Elderly citizens need this help, particularly people who do not speak the language,” she added.
The approach worked. Ultimately, the Board of Supervisors sent Lee a budget that restored $130,000 to eight nonprofit agencies providing naturalization services. Lee’s signature on July 26 formalized the reprieve for Self-Help for the Elderly.
Self-Help for the Elderly provides a range of services, including classes in English as a second language and preparation of citizenship applications. Chung said limiting her group’s work would pull at the civic fabric of a famously diverse city.
“If these legal residents don’t become citizens, they’re vulnerable to losing medical care and benefits,” Chung said. Most likely, they would have remained ineligible for Supplemental Security Income and Medi-Cal.
Also, she added, fewer new citizens would translate into fewer new voters — and potential political allies. The process of naturalization is wrought with complications that can be hard for elderly immigrants to negotiate alone, but with grants from the city, local organizations can provide crucial guidance. For example, according to the U.S. Citizenship and Immigration Services, applicants 55 or older who have lived in the United States as permanent residents for at least 15 years may be exempt from taking the exam in English and can opt to take it in their native language if they bring an interpreter to the interview.
Seniors living on fixed incomes might otherwise have to turn to expensive private instructors or fall prey to people who claim to be immigration specialists without verifying their credentials.
If the program is cut, Dupuis told the supervisors in June, “there will be scam artists all over the place.”