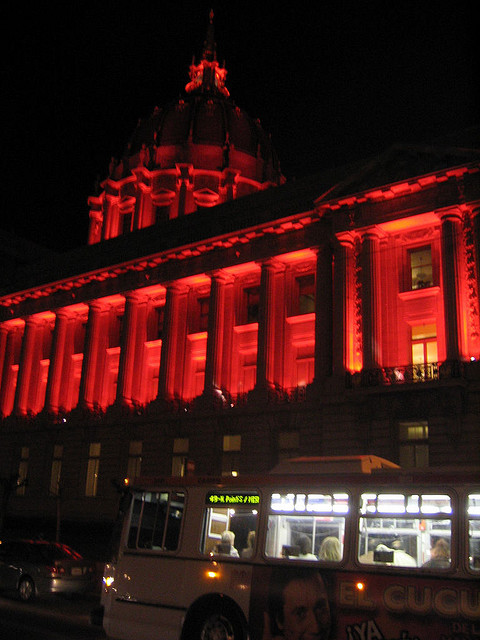 City Hall has been awash in red ink the past three years. Photo by Steve Rhodes/SF Public Press

Police and firefighter unions will pay more out of pocket toward their pensions. Disease prevention programs and street beautification will be scaled back. At least $37 million in capital projects will be added to a growing deferred maintenance backlog.

Hundreds of millions of dollars in cuts approved in July forestalled a fiscal day of reckoning for San Francisco, a city that for three years has, like hundreds of local governments across the country, struggled to stay solvent in response to a fluctuating tax base and rising labor costs. City staff estimate that costs are rising three times faster than tax revenues.

This summer, local leaders dug deep to erase a $380 million deficit for the 2011-2012 fiscal year. It was a moving target, growing from an initial projection of $306 million in March, which made the final budget cut decisions extremely painful. The total budget added up to $6.83 billion — an increase from last year’s $6.48 billion, but difficult nonetheless because nearly half was locked up in earmarked, but ever-rising, costs.

In an attempt to be more engaging than his predecessor, Mayor Ed Lee conducted 10 town hall meetings across the city between March and May. The added participation of district supervisors gave the public a chance to hear their priorities before the proposed budget was released in June. The meetings also provided special interest groups a chance to plead for clemency for their programs.

“The goal was to have a situation that was not like we’ve had in the past,” said Rick Wilson, the mayor’s budget director. After the mayor proposes his budget on June 1, the community and supervisors have had little say until budget hearings, which generated a “scramble” to restore cut funds. “They’re kind of surprised, and maybe taken off guard, when they see the budget.”

But, by and large, the mayor’s budget was the final budget. A few ideas directly from the sessions made it into his revised proposal: the mayor restored a nutrition program for seniors when proponents voiced concerns at the early meetings. The mayor made more than $26 million in changes — accounting for less than one-half of one percent of the total — before submitting his proposed budget to the board June 1. Those changes were based on conversations with social service providers, labor and business groups, said Christine Falvey, the mayor’s spokeswoman.

The year-by-year scramble to cut funds, brought on largely by plummeting tax receipts in the wake of the recession, have harmed the city’s ability to plan projects that take more than a year to carry out. Lee, who will seek his first full term as mayor in November’s election, proposed the city move toward a five-year planning cycle, a seven-part plan he unveiled in May that includes new taxes and employee benefits.

“This is a significantly different budget process, one that I feel has been depoliticized but has been looking at the greater good of a balanced way of doing our work,” said another mayoral candidate, District 11 Supervisor John Avalos.

Yet even as the ink dried on the reconciled city budget Lee signed on July 26, the city controller’s office predicted shortfalls as far as the eye could see. The office calculated that the deficit would double in the next two fiscal years: a $408 million shortfall for 2012-2013, and $642 million the following year.

A report jointly published in April by various city budget agencies including the mayor’s and the supervisors’ offices, said costs would continue to outpace revenues unless structural reform was enacted. The long-term deficit threat led several rivals for mayor to propose such reforms on the November ballot.

Any real savings come through stiff labor concessions. The city’s unions spent months working with Lee to develop his pension reform ballot measure for November, which advocates estimated would save San Francisco $1 billion over 10 years. The proposed charter amendment would raise the retirement age for city workers and limit their pension benefits, while forcing them to pay more toward health and retirement plans.

That idea is at odds with another pension reform measure proposed by Public Defender Jeff Adachi, which would require large pension contributions. Adachi said his plan could save the city up to $50 million a year. Adachi, whose Proposition B pension reform initiative failed last November, is naming this ballot measure “Son of B.”

Before even proposing his budget, Lee convinced police and fire unions to agree to lower take-home pay. Firefighters, for instance, got a 3 percent salary raise, instead of a scheduled 4 percent, and they must contribute an additional 3 percent into their pension fund. The net result was no raise. The deals will save the city $31 million over two years — vital to avoiding public safety layoffs, an unthinkable move in a mayoral election year.

Most of the savings this year came from a combination of one-time and ongoing departmental cuts, consolidations and increased efficiency.

But other reductions came from programs with longer time horizons, including deferred maintenance and infrastructure improvements that would have been completed in future budget years:

•More than $37 million was cut from city capital projects. One of the biggest losers was the neighborhood beautification program, which will be eliminated, saving more than $1 million.

•The Airport Commission had more than $28 million cut from capital projects and grants, though it did get an additional $8 million to run Terminal 2 at SFO.

•The city’s War Memorial and Performing Arts Center saw a 55 percent budget reduction, and will save the city more than $14 million by curbing operations and maintenance.

San Francisco also found some new money this year. A big piece of the budget gap was closed as tax revenue on everything from parking lots to business payrolls increased. The reprieve came as the slowly reviving economy led to higher-than-expected tax income (especially on property transfers) and better state reimbursements for Medi-Cal services.

But new charges for city services were the largest source of new revenue across city government — a total of $109.5 million, up 5.1 percent from last fiscal year. That was largely the result of higher fees on airport concessions and service rate increases from the Public Utilities Commission.

One ongoing frustration for politicians is that of the $6.83 billion total budget, the city’s general fund, powering everything from aid assistance to the Human Services Agency to grants for nonprofits, makes up only $3.3 billion. Other funds are tied up in debt payments, promises to voters through ballot propositions and grants from the state and federal governments.

Labor costs are hard to tinker with during the summer budget season without cooperative unions because of multi-year contracts. The largest projected increase in operations is for employee salaries, wages and fringe benefits. Salaries and wages are expected to increase by $50 million in the coming fiscal year, with fringe benefits, including pensions and health premiums, increasing by $93 million.

There will also be more funded positions, mostly at the Department of Public Health, where officials are preparing for the phase-in of federal health care reform in the next few years.

The Board of Supervisors spent more than a month poring over the mayor’s proposed budget but could find only $17 million in changes, with an additional $3 million coming back for earmarked projects in various departments.

One controversial recommendation from Lee’s office was to take away control of security at San Francisco General and Laguna Honda hospitals from the sheriff’s department and outsource it to a private contractor. But the Board disagreed, continuing the funding. They also set aside additional funding for a new Police Academy class.

Falvey said part of the mayor’s early effort this year to be transparent with the Board of Supervisors minimized the messy “add-back” process, the period when supervisors have a month to make line-item changes to restore funds to program areas before passing a final version for the July-to-June fiscal year.

District 8 Supervisor Scott Wiener said the add-back process was different this year, taking place before the mayor submitted his nominations, reducing the last-minute scramble for funding for politicians’ pet projects.

“It’s smaller because the mayor was very collaborative with the board before he issued his budget,” he said. “There were a number of things that I may have needed to add back that I was able to persuade the mayor to put in his budget to begin with.”

Wiener said that in the past the add-back period was more chaotic because of the poor communication between certain supervisors and former Mayor Gavin Newsom, who departed in January. The result, Wiener said, was “a more collegial relationship within the board, and so it has been a much smoother process.”

This story appeared in the fall print edition and was part of the Building a Better Budget package of stories.